9 meter fall onto my back: the interview 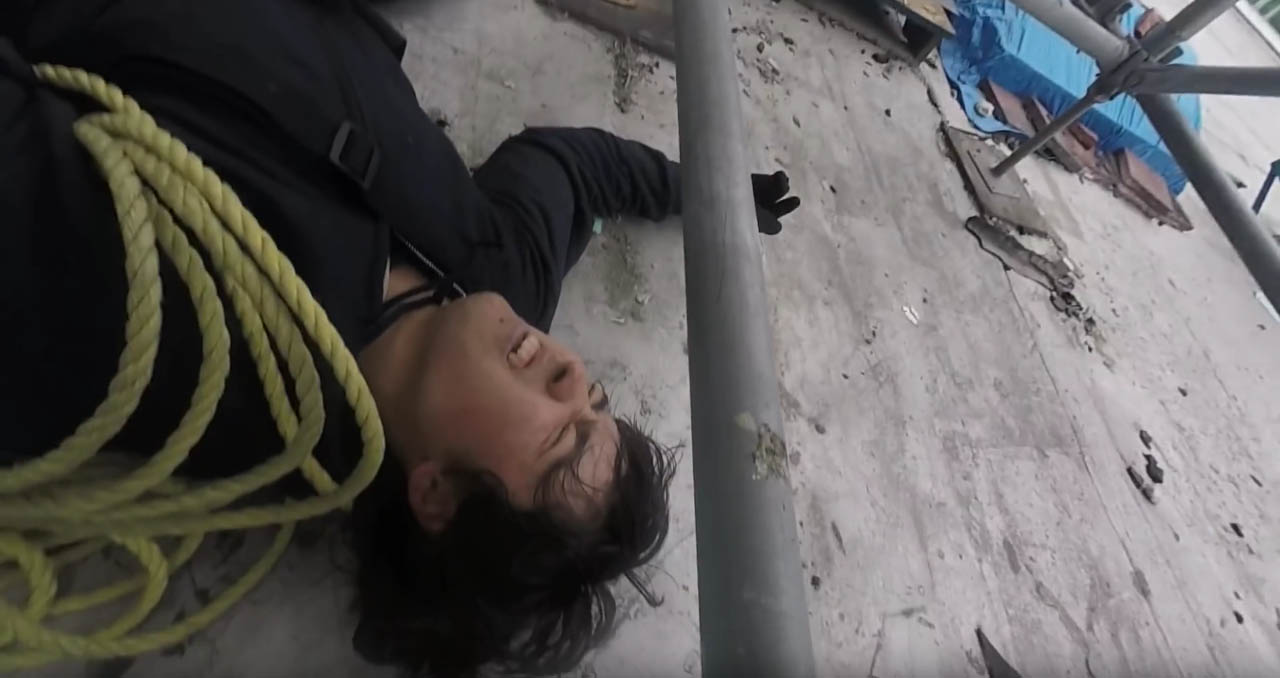 It’s no secret that people be getting high up on things these days. Places where they aren’t supposed to be. What used to be the shadowy world of Urban Exploration is now a social media sensation. Now with HD video and nobody giving a fuck.

Recently a video has been trending that is a little different, something closer to home. A kid named Epinerein trying to climb the Fairmont Hotel Vancouver up a goddamned extension cord and falling a good 20 ft onto his back.

But if you’ve ever climbed anything and been on the sharp end of a rope, it’s easy to empathize with his “oh shit” moment — that moment when you’re pumped and realize your only next move is down.

Yes, if you’ve done everything properly up to this point you aren’t facing a life or death situation. And most of climbing is overcoming irrational fear and knowing your limits.

That said, looking at his YouTube channel it’s clear this guy has had his fair share of successes and a healthy amount of mental fortitude.

So what went wrong?

I just ran out of energy and freaked out. I had been suffering from low energy for a long time, but I’ve been able to fix it recently.

What do you mean fix it? By physical training?

No, I’ve had some medical issues with low energy since I was 4 years old. It slowly progressed into mental illness and things like that — learning and social difficulties. I’ve managed to overcome it through biohacking. Basically holistic health approaches. Using dietary supplements and smart drugs, meditation, and so on. It’s something that I’ve been studying for over a year and I now work as a health advisor to help people overcome these issues.

No, working at a store and through an online business, vitamotiv.com. 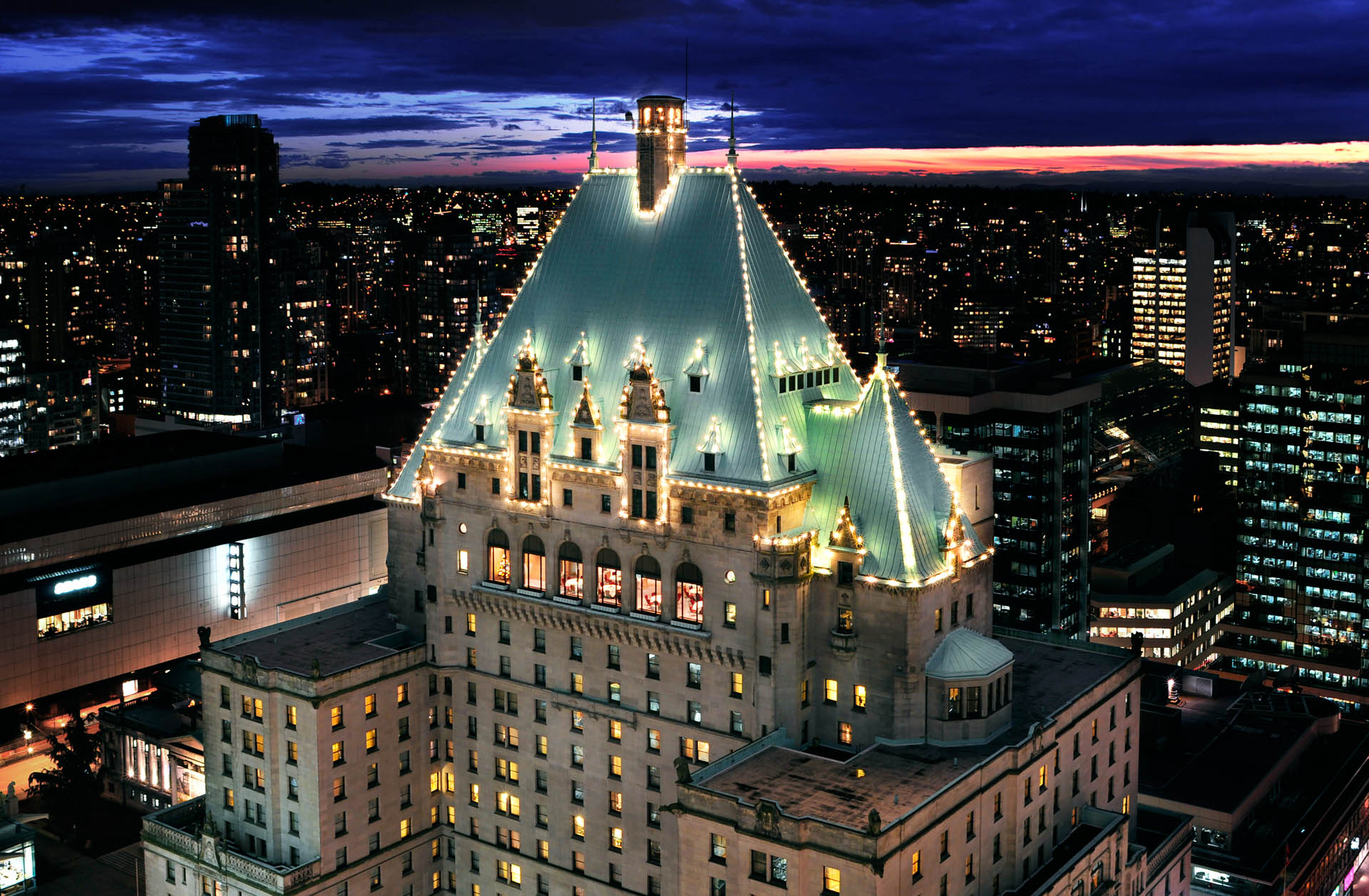 Fairmont Hotel Vancouver. Epinerein fell from some point on the wall to the right, landing on the large patio area. The black band 3/4 of the way up the wall is the ledge he tried to rest on.

What made you think climbing an extension cord was a good idea?

My mental illness might have had some effect. I felt if I fell I had nothing to lose. But mostly it was pure stubbornness. We were up there since 9pm the night before, looking for a way up to the top. The top is really appealing, there’s like a chimney with 6 windows that I’ve always wanted to get into. The rubber cable was the only way up. I was 49% ready to quit, but decided to just go for it. By no means did I think what I was doing was safe.

In Vancouver people go home and sleep. There might be one security guard, but he’s probably asleep or in his truck eating a sandwich or something.

It looks like you were quite close to the top.

I had about 5 meters to go. [ed. note: from the pictures it looks to be about 5 ft.] I slid down the rubber cable and tried to step back onto the scaffolding. My arms were dead, so the only thing holding me were my legs pinched around the cable. When I tried to step on the scaffolding I fell.

I broke my right arm, left shoulder, and hurt my spine. If I fell from the top, I probably would have been speared by the scaffolding.

If you made it up, how did you plan to climb the steep green roof?

I was going to climb the green roof like a monkey on the corners. That’s all I can say. I didn’t know if it was possible to do or not.

People’s reaction on YouTube to your friend are not the most positive.

Well most people don’t know the full story. Kalen tried to catch me which helped. He is really a nice guy, and was just joking around to keep things calm. The reason I chose Kalen for the climb is because he’s able to remain calm in any situation. There is good sized group of us that do this, but I chose him for this climb. 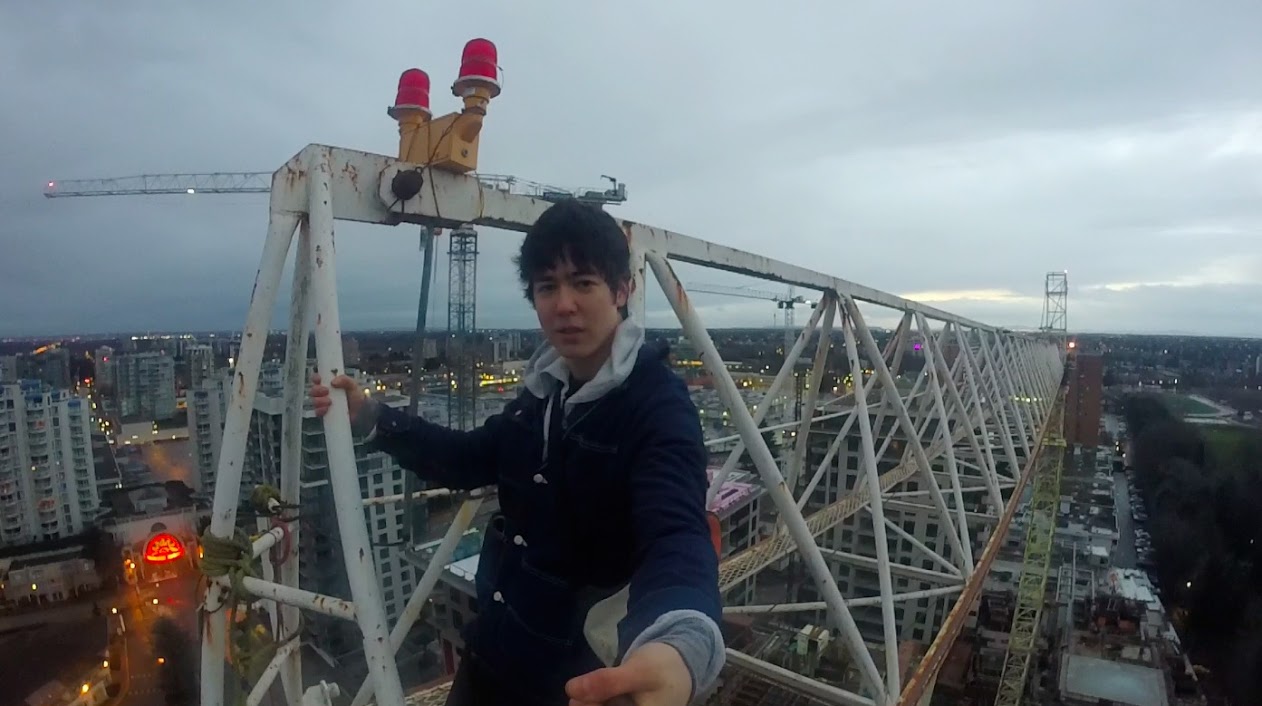 Epinerein on a crane somewhere in Richmond

Is this group organized through an online community?

Most people are just friends of mine. Some people contact me through email after seeing one of my videos.

You had some yellow rope with you. Do you have any climbing training?

No, I was learning as I went. I planned to use the rope to get down since I didn’t want to come back down the rubber cable.

Do you climb at night, or early morning when people aren’t around?

I mostly climb during the daytime. With the rooftop stuff I realized how lenient people are. I’ve only been caught on a roof once during the day, and it was because I was hanging around for too long.

Falling made it even better. It brought new experiences and it’s where I got to meet the new me.

What inspired you to do all of this?

I’ve been into it since I was 9 years old. I grew up in Japan and used to climb in the playground and on smaller rooftops, like 3-4 storeys. I never grew out of it.  Also my home life wasn’t that great, so I’d climb things as an escape.

Do you still climb?

I’ve been arrested 6 or 7 times now. I guess you could say I’m semi-retired. Until the last time the police were pretty relaxed and just let me go. But in September 2015 I climbed a crane in Calgary and was charged and convicted of mischief. I had to do 32 hours of community service and make a poster warning people not to climb cranes and buildings. If I climb something again I’ll get a criminal record.

What did they do with the posters? Put them in schools or something?

I’m not sure. It was part of some alternative measures program. 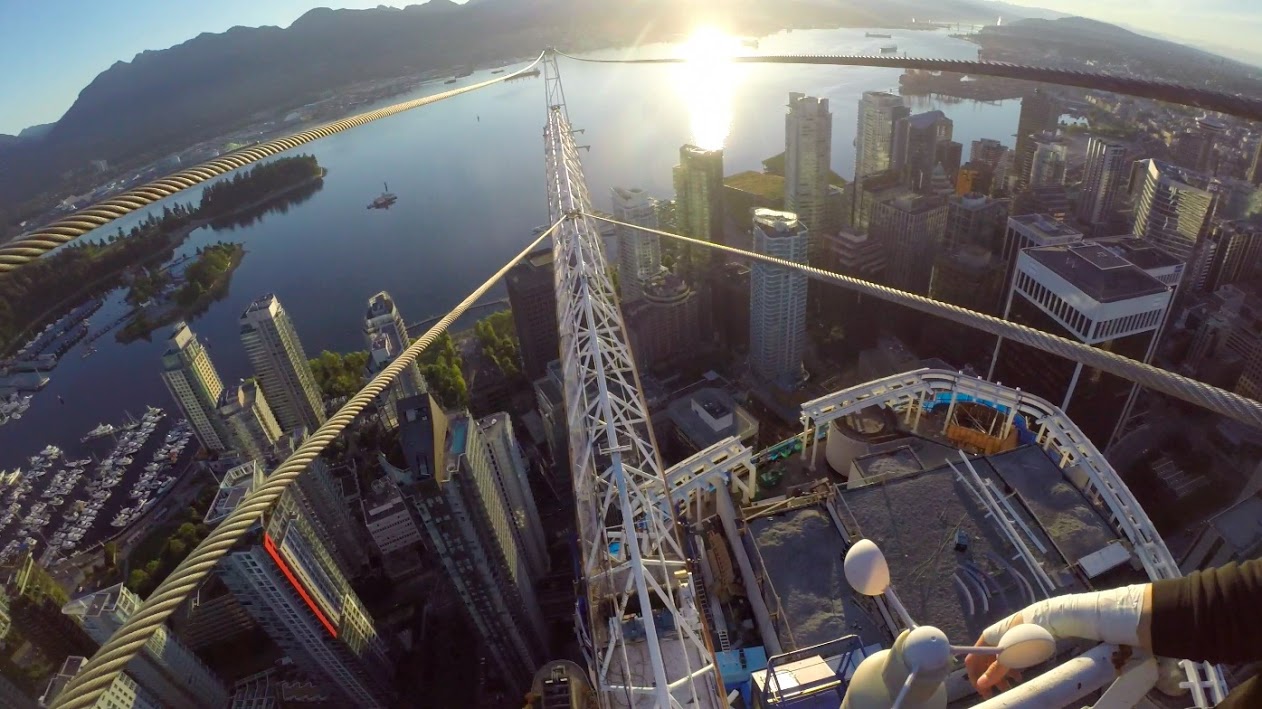 Is security worse in Calgary versus Vancouver?

Calgary is almost impossible to climb since there are people at the sites 24/7. Overnight workers. In Vancouver people go home and sleep. There might be one security guard, but he’s probably asleep or in his truck eating a sandwich or something.

Have you been contacted by the police since posting your Hotel Vancouver video?

No, the climb was over a year ago so I don’t think anyone cares. The police are pretty chill people. They know I’m not going to try and harm anyone or vandalize things.

What was your favourite UrbEx adventure?

Definitely the Hotel Vancouver. Falling made it even better. It brought new experiences and it’s where I got to meet the new me. I was building scaffolding at the time, and because of my injuries I lost my job. I knew I wasn’t going to be able to make my next rent. But despite all that I felt pretty good, happy, at peace.

Epinerein lives in Calgary, but wants to move because “it’s a boring city.” He doesn’t mind if I use his real name but I won’t. In Canada, a summary offense (i.e. misdemeanor) must be charged within six months of the act. I always thought it was within 6 months of authorities *knowing* about an act, but who am I to argue with Wikipedia.