Buildering might be barely even a thing but that doesn’t mean it doesn’t have meaning. And ‘FAQ’ is misleading as these questions are far from frequent. If you disagree with anything, feel free to get in touch and we will happily ignore you.

Buildering is climbing on buildings, or more generally any architecture not designed specifically for climbing. The term is a portmanteau of bouldering and building — bouldering being low-level climbing without ropes, often focusing on shorter, harder routes free from equipment.

The skyscraper “human fly” aspect of it can be — typically these climbs are free solos without protection. However the majority of buildering takes place at street level and doesn’t involve climbing to a height from which a fall is fatal. Additionally, bouldering mats may be used to cushion a fall.

Well, we used to have a forum for that sort of thing, but all internet forums died out sometime around June 3 2006. Now we have a Hook Up post which you can try commenting in. We give your rate of success somewhere around 2.1%.

The good news is that there is are real life world out there, and virtually all builderers have interest in some other related sport, be it rock-climbing or parkour. Try asking around at your local climbing gym, or organize your own outing — many gym climbers find the break from pulling on plastic fun and refreshing. If you are a college or university student, see if there’s an outdoor/mountaineering/climbing club. Parkour has a significantly larger and more organized community, check for local clubs or forums. Likewise many parkour practitioners would jump at the chance to develop a different urban movement. 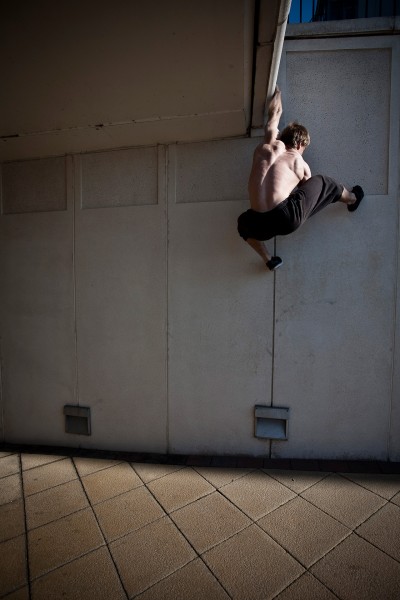 Buildings are boring. Why not rock climb instead?

It is a common misconception that climbing buildings is performing the same easy move over and over again. For skyscraper ascents this may be true, as could be claimed for some 5.4 multi-pitch rock climbs. However the level of difficulty varies just as it does on the rock, and climbing without a rope adds to the adventure and difficulty in either case.

Why is this a thing?

Urban subversions offer an interesting insight into society and are often the subject of academic interest. Urban identity, subculture, representation, the re-appropriation of space, performance, spectacle, risk mitigation, everyday practice, and phenomenology are but a few topics exhibited in buildering. Beyond academia, the practice is highly rewarding physically and mentally.

Isn’t it just a part of parkour/freerunning?

Yes and no. Buildering has its own history, its own style (or non-style), its own ethos. Part of this overlaps into parkour and freerunning but it is also quite distinct. Furthermore, you could argue that buildering pre-dates parkour by about 70 years. 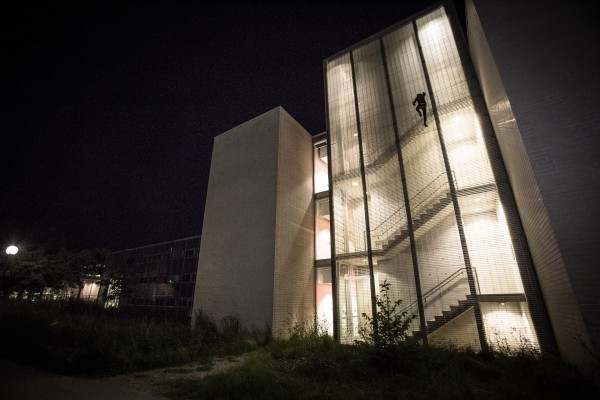 Meg Alderson (no, that’s not her real name) being special.

You aren’t special. People have been doing this for years.

This depends on what you are climbing and where you are. In London, many of the best problems are on public property and draw no interest from the police. University campuses often have good terrain but will draw attention from security guards. Trespass laws are different from country to country and it’s worth knowing what is public and what is private.

What if I’m caught, or suspect police are on the way?

Much of what follows only applies in extreme situations, but knowledge and planning is always useful. What level of “caught” depends largely on you. Who you are caught by matters a great deal: 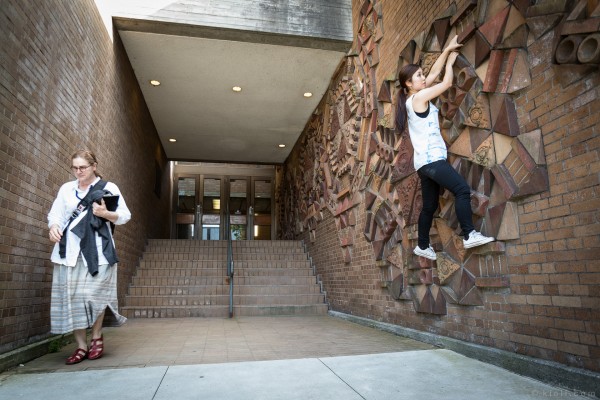 Mayumi entertaining the crowds at UBC.

– Concerned citizens: Explain, then ignore. Some are curious, some frightened (it doesn’t take much of a break from normality for some), and some intent on ruining your day. Ignore hollow threats, false claims of authority, and the like. Some people like to feel important, that they are bringing order to the universe. Be wary of people pulling out cell phones in your vicinity. One trick is to walk directly up to the person in a non-confrontational manner. Try and gauge their body language and conversation. If they look guilty or walk away from you, there is a good chance they are calling the police. If they look surprised and say “excuse me? can I help you?”, they are probably harmless. Reply “sorry, I was just wondering if you could tell me what time it was?” If you suspect they’ve called the police, it’s best to move on.

Any security guard intent on keeping you for questioning will attempt to obtain an item to be held hostage.

– Security guards: Dealing with security guards requires decisiveness and a good deal of diplomacy. In most (all?) countries security guards are not allowed to detain you. They are citizens and doing so has legal repercussions. Regardless of their legal ability to detain you, they are trained in various tactics to get you remain at the scene by your own will. The security guard “air of authority,” often applied in laughable amounts and pointing to a psychological shortcoming, is part of their training. The “as close as possible without being charged with impersonating a police officer” uniform, radio, car, and belt full of gadgets is their effort to earn your respect, compliance, and submissiveness. Be respectful, but do not be fooled.

Any security guard intent on keeping you for questioning will attempt to obtain an item to be held hostage. This probably will be a request for identification. In an extreme case they may try and grab a personal artifact — this is essentially theft and appropriate response is “what the fuck?” and fisticuffs if need be. In most cases, your moment of decision will be the request for I.D. This should be decided well in advance and as a group if climbing with others. If you feel all parties involved will behave reasonably and you trust nothing will come of your actions, feel free to give full compliance. Your fate is in their hands, make the best of it. They may still call the police, or they may already be on their way.

If you feel you will be dealing with unreasonable people and your buildering-related actions may see repercussions, leave. A simple “no thanks” and walk away is the least confrontational. Run only if need be. If in a group, plan in advance to head off in different directions with a common indoor meet up point. If you are on a campus, security may patrol inside buildings as much as outside, so pick a privately owned building. A McDonald’s or something.

Partial compliance or arguing over the legality of buildering or their authority is best avoided. You’re only making the worst of the situation while waiting around for the real authority to arrive. 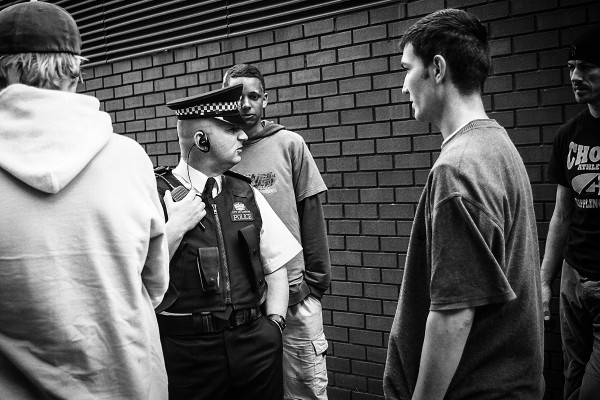 Police: DO NOT RUN. If currently running from one of the above situations, you’ve got an awkward transition to deal with. Evading a police officer is a crime. Climbing on buildings is not explicitly a crime — trespassing is the closest relate-able crime and arguable should it come to that. Give absolute cooperation to police. Friendliness, curiousness, and an air of innocence helps. Don’t deny your actions, but don’t implicate yourself beyond what is immediately apparent to the situation. “What you say may be used against you in a court of law,” isn’t just something they say in the movies. Should the officer choose to detain you for further questioning, they will remind you of this.

There is a significant difference between being detained and being charged with something. It’s critical during questioning that you walk the line between not incriminating yourself and doing your best to alleviate concern. “Why are you doing this?” will likely be asked. Explain it in as easy to grasp a concept as possible. If climbing something high, “I wanted to see the view” tends to work. A camera would support this claim. There’s no point in deleting the photos on your camera — you’re caught, there’s witnesses, you’d only be destroying evidence. Take photos instead, if possible to do so without being a dick. Encounters with police tend to make the most interesting photos.

Much of an officer’s and judge’s concern is personal and public endangerment, so try an come off as competent. If you’ve got boulder pads, point this out. If you are a rock climber, mention this. However, saying “you’ve done this before” is likely more incriminating than helpful. 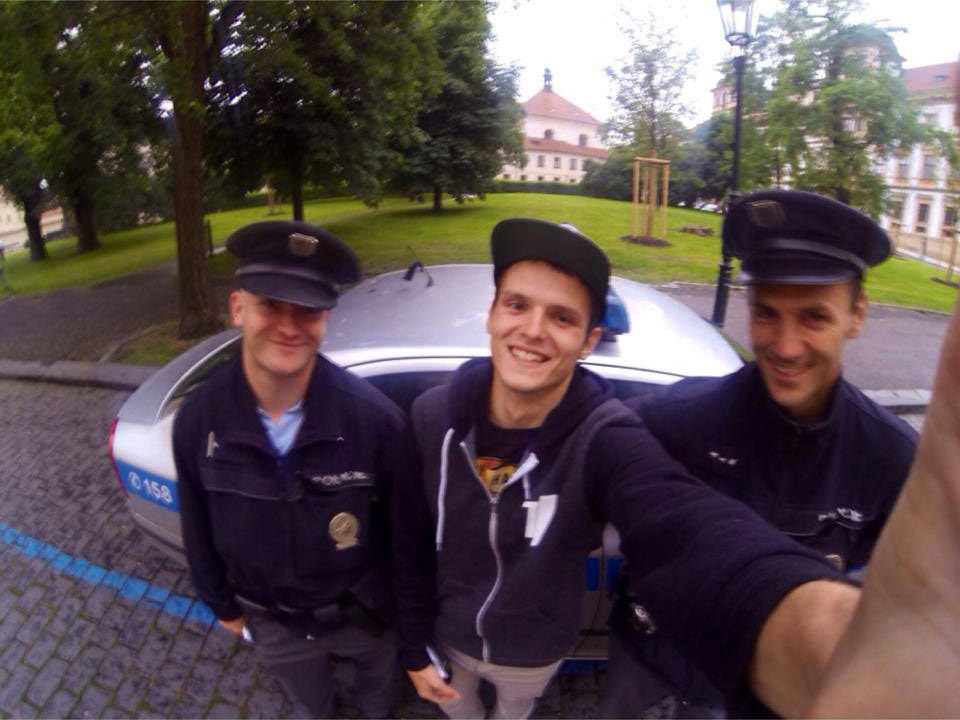 Mustang Wanted being arrested for climbing in Prague. Master of diplomacy.

The realm of buildering resides happily outside of the destined-for-Olympics established world of rock climbing.

You are partaking in something considered to be asocial at best, illegal at worst. Creativity reigns supreme. So climb whatever you want, however you want, preferably naked.

However, for those looking for guidance on how to maximize their buildering experience, the following tips may prove helpful: