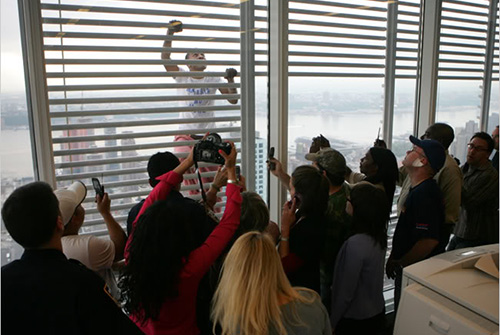 A year ago today, Alain Robert climbed the New York Times building [748 ft] in NYC. This alone is barely newsworthy, given the number of ascents Alain does in a year. However, five hours after Alain’s climb, another climber began the 52 story ascent. One of Alain’s buddies? Who dares enter the realm of extraordinary feats previously reserved for one man?

Renaldo on The New York Times building. (Video works, despite no preview image.)

Let’s go back to June 5th, 2008. You are sitting in the office, and you just find out that Alain Robert has just climbed the NY Times building. What are you thinking?

I was really upset. I had been planning to climb the building for years.

In 2006 there was an Open House New York event. People could see blueprints and models of all sorts of buildings in New York, including the NY Times building which was still under construction. I knew I wanted to climb it, so I gathered up as much information on the building as I could and meditated upon it. I had everything except how much weight the ceramic rods on the building could hold.

My initial plan was to climb the building at 2 am so I wouldn’t get caught. Then last year I found out about the Malaria No More organization through my work. Every 30 seconds an African child dies from malaria. That’s over a million kids a year, and it is easily preventable. If a small village in Africa has at least one bed net coated with a pesticide it will keep the entire village safe. It’s just a matter of donating $10 for a bed net.

My plan then changed to climb the building during morning rush hour, with a Malaria No More t-shirt on to raise awareness. But I didn’t climb it, and it was eating away at me.

The day Alain climbed the building, I got a call from a friend of mine who knew about my plan, and he’s says “Are you climbing today? Well someone else is then.” 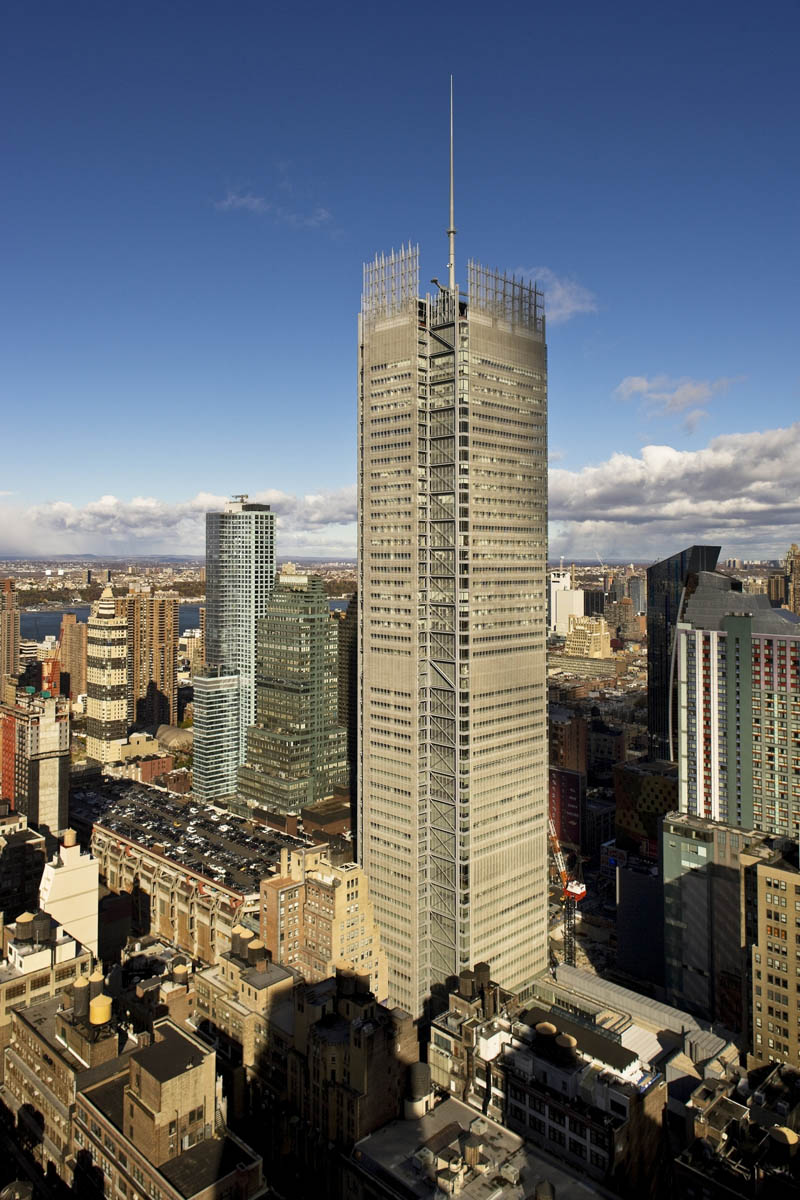 The New York Times building in all its glory.

Had you heard of Robert before this?

Why pick the same day?

It’s funny because earlier that week I had a dream that someone else climbed the building before me. So I couldn’t believe it when that actually happened. It made me feel like a slacker, like I slept on it and now someone else came and took it away.

So I’m moping around the office, and I think, “Hey, they don’t expect two people to climb it in the same day.”

I go to Paragon, buy some climbing shoes, go to the Gap, buy a t-shirt, and buy some rubber stamps from an art supply store to print on my shirt. I get to the building around 6 pm and start climbing.

My hands were quickly covered in soot. I don’t think chalk would’ve helped much. It would’ve looked professional though.

In the aerial footage of your climb, it looks like the ceramic rods flex quite a bit.

Yes, and some of them broke under my feet. I tried not put all my weight on a rod. I weigh 135 lbs, so divided by four that is 35 lbs per limb. I figured they could hold 45-50 lbs. Plus seeing Robert climb it, I knew I’d be fine.

When they were constructing the building, I could see what looked like a metal rod going through the ceramic. But when I later met some architects from Renzo Piano’s office, they said that those are hollow ceramic rods.

Did you ever think that you’d bitten off more than you could chew?

Do you know that Dan Osman video, where he runs up a rock face in four minutes? [Dan Osman – Bear’s Reach, 5.7, Lover’s Leap.] I thought that was going to be me. *Laughs.* When I got to around the tenth floor I got a little tired and thought “man this is a lot more that I thought it’d be.” But you can’t back out of something like that.

In the video it looks like you climb a story or two and then shake out your legs.

Yeah. The whole leg thing was precaution, I didn’t want my legs to cramp up. Most of the buildings I’ve climbed, I take my time, take pictures, drink water. But on this thing, with traffic backed up to Greenwich Village and helicopters circling around, I was racing to the top of the building. It took me 40 minutes to climb. I didn’t want my legs to cramp so I’d stop and stretch out. 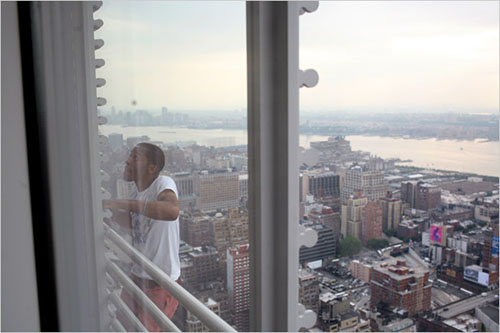 On the last five stories the cops lowered a rope down with a stick tied on the end and said, “grab the rope, tie it around you.” I’m not gonna grab a rope with 40 stories below me. I told them to hold on, I’ll be right up.

How did the cops treat you?

They were really nice to me. I don’t know why. I was really apologetic, “hey I’m sorry you guys are here. Sorry for all the nonsense and commotion.”

They sent you to Bellevue Hospital for a psychiatric exam.

What is your previous climbing experience?

Did you solo climb these, or use gear?

And these other ascents were done at night?

So the Alain Robert NY Times ascent was the moment where you decided to go public with your activities?

Ya, although it’s the last one I’ll do publicly. I don’t like the publicity and I have a 1 year probation. Plus, climbing at night is more fun. You’re sneaking about. You sneak in there, climb, take a picture and go home. My friends all ask me now, “What’s next?”, but that’s only for me to know. 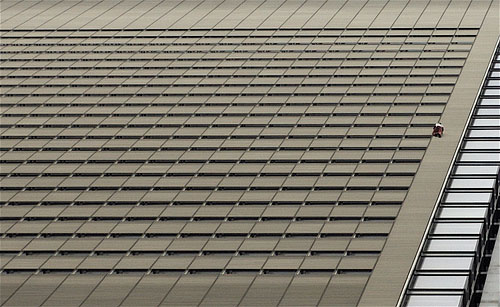 Is the NY Times Building the hardest building you’ve climbed?

It was the easiest. It’s a giant ladder.

What do you know of the technical rock climbing world?

I wouldn’t say I’m a technical climber, but I’m a natural one. I may not know a lot of the rules of climbing, but I can climb just about anything given a couple tries. I train at a climbing gym on 59th st and 10th ave in Manhattan and can do almost all the climbs except for the ones where the fingers go to really tiny nubs.

Do you have a crew that you builder with?

I’m the only one. Once I met three guys on my way down from the Manhattan bridge in ’97. I first I thought they were cops, but they were young like me, so we headed back up together.

Explain the legal process for those of us not familiar with US law.

Well I first appeared before a grand jury with no judge present. The D.A. tried to convince the jury that I didn’t know what I was doing and was a danger to the public. I told her that I’d climbed the Hearst Tower, Flatiron, and the bridges. She asked for proof, and I had photos on my laptop, but my lawyer advised me that if I showed the photos they’d keep my laptop as evidence.

Would proving you had climbed other buildings help or hinder your case?

That was a bit of a dilemma. If I proved I’d climbed the other buildings, there was a chance they might try to convict me on those as well. But if I didn’t prove I was competent then I’m just a copycat guy. But my laptop is my bread and butter and there was no way I was going to let them have it. 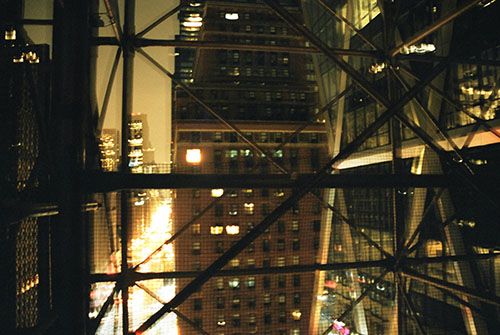 So the grand jury charged me with reckless endangerment and disorderly conduct. A pleaded not guilty and then had to appear before a judge. I went before the judge pretty much once a month last year. First the D.A. wasn’t ready, then the third guy climbed, Malone, which complicated my case. They kept pushing it back until February when I settled.

I ended up with one day community service, a $150 fine, and a one year probation.

What do think about David Malone’s climb?

I wouldn’t say he climbed it. He bouldered up to the 11th floor. He had a very self serving message trying to promote a book that he wrote on Al Qaeda. It’s not what Robert did and it’s not what I did.

After his climb city council members introduced a bill making it illegal to scale or jump from a building 25 feet or taller. Do you know the status of this bill?

I think it passed. It’s really bogus. I feel really bad for any other builderers out here. 25 ft is only two stories. I don’t know if I should say this cause I’m still on probation, but I don’t expect to follow that law anyway. I don’t want to sound arrogant, but we climb things, it’s what we do.

I understand you met Alain in jail.

The story goes that as he was in a cop car being sent down to central booking when I started climbing. The cop told him, “hey another guy is climbing the building.” Alain says “What? I don’t believe you.”

When I saw him in jail he said [Renaldo, in a rather good Alain impersonation], “I can’t belieeve you clime that buildeeng.”
He was really nice to me. We talked casually for about 10 minutes.  I really like Alain. I think he’s crazy, but a good guy. 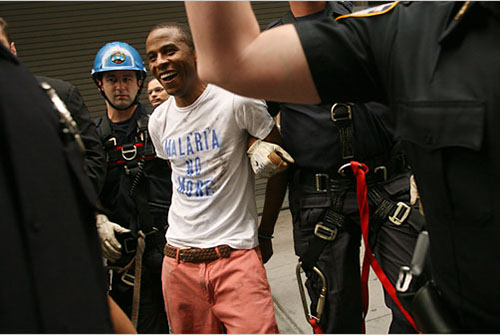 What do you think of Robert’s message, “Global warming kills more people than 9/11 every week.”

He’s into pop culture. He says what’s popular. And it’s something that is debatable anyway, this whole global warming thing. It could be a natural cycle of the planet. Who knows?

How did your employer feel about your stunt?

My coworkers were cool with it, but the bosses that were involved with Malaria No More weren’t too thrilled. I no longer work there.

One year later, do you have any regrets?

No, aside from going to court for 8 months. I mean, I did what I wanted to do. And malaria was heard about which is even more positive.