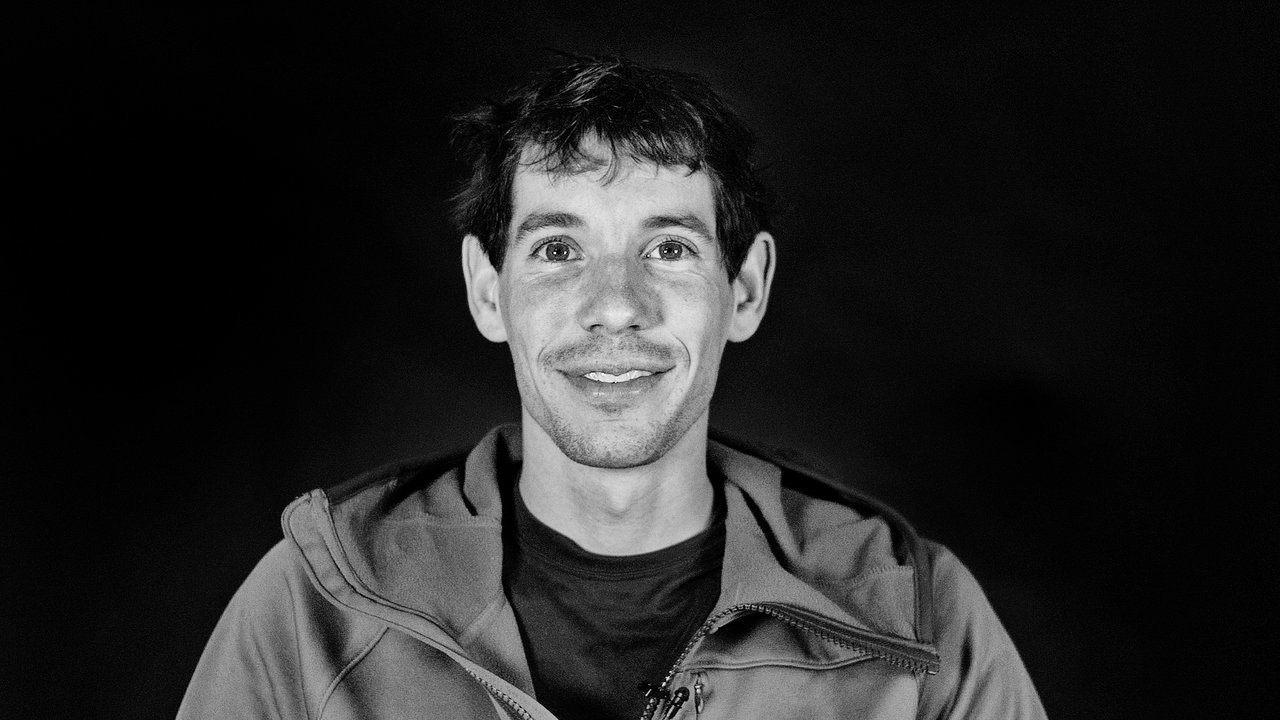 It’s Saturday evening and the 9th annual Squamish Film Festival is over. Alex Honnold has just finished the Q&A on his Sufferfest film — a self-propelled cycling and ropeless climbing adventure through California and Utah. The crowd has dispersed. Honnold and Marc-André Leclerc, a like-minded local climbing phenom, are in the lobby swapping intel on free-soloing Squamish’s Grand Wall.

“How did you climb Perry’s Layback?” Honnold asks. “I found some sections a bit hairy so I grabbed the bolts.”  “Ya, me too.” “And the loose-ish block on the chimneys?” “It won’t break when you pull on it, but you know it won’t be there forever.” “Overall it’s a good scramble.” “Scramble” traditionally referring advanced hiking, i.e. jumping over a few boulders — not 10+ pitches of sustained technical vertical climbing. 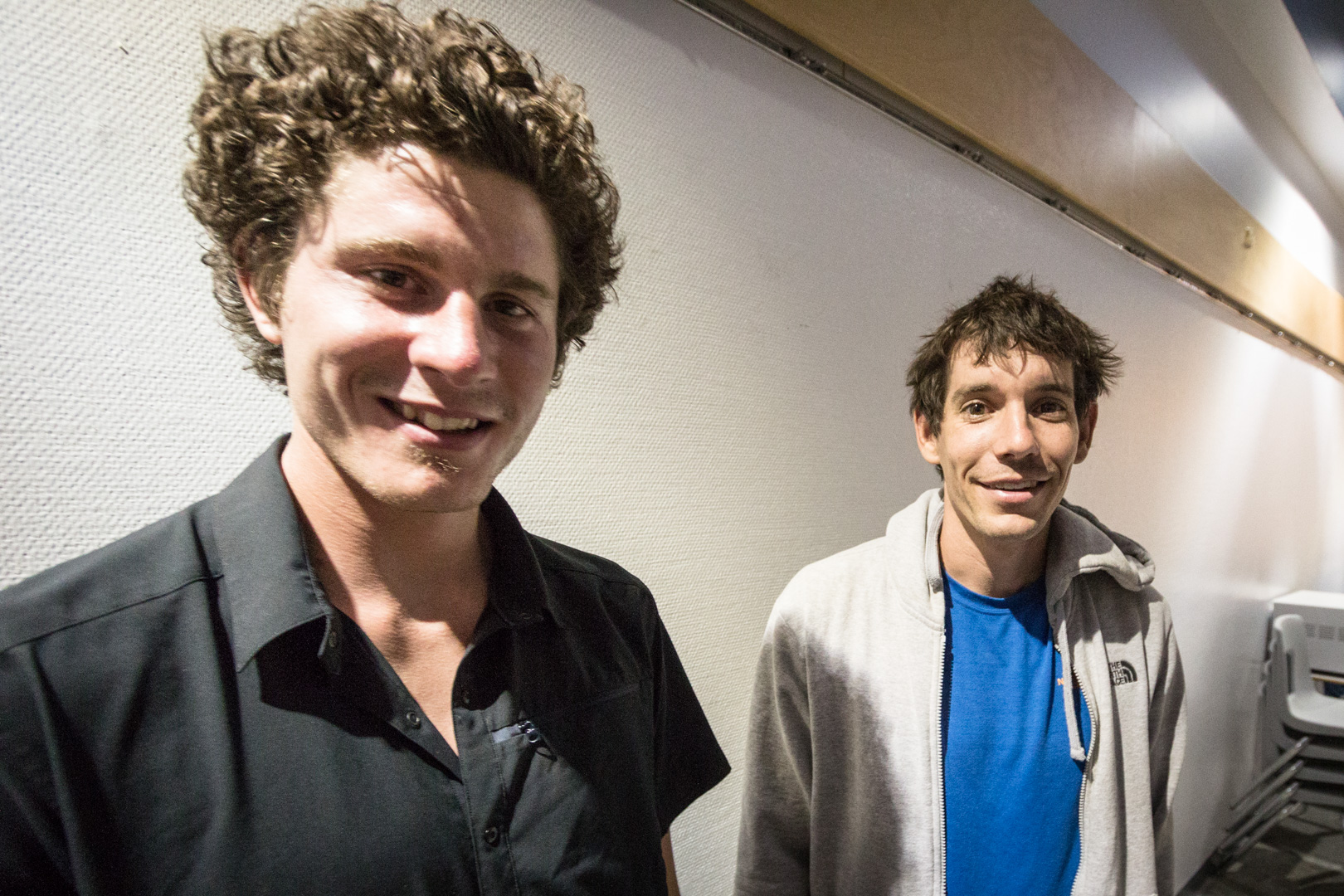 Honnold has “scrambled” as hard as 5.13a, and Leclerc not far behind at 5.12. Extremely difficult grades for most, but for these guys they are routine. You don’t make a career out of free-soloing personally difficult routes, or at least not a very long career. “It just happens that the type of climbing I like to do looks good on a camera. I’ve made a career out of climbing really easy things without a rope,” says Honnold. 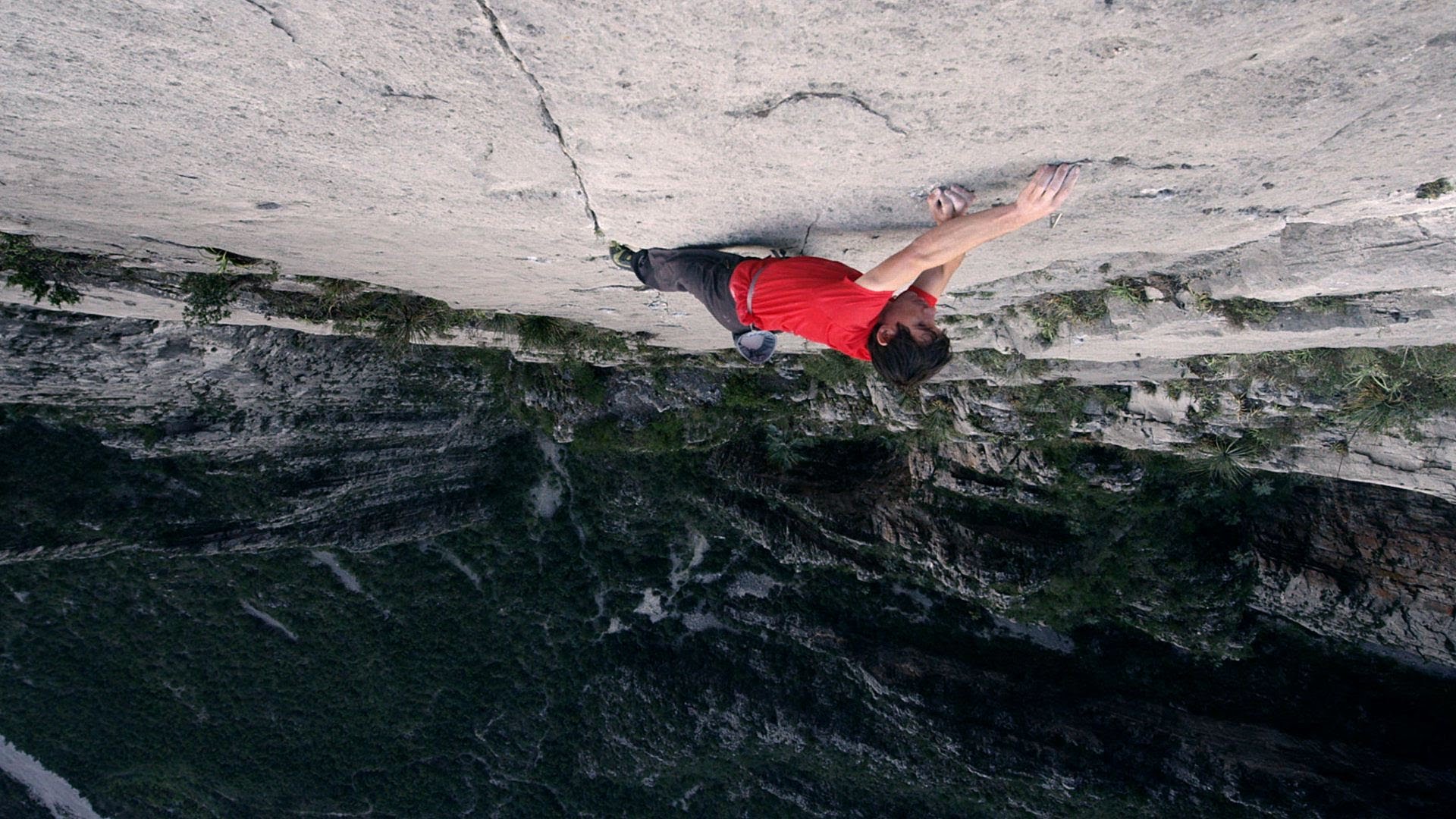 He doesn’t come out and say it then and there, but it’s obvious he is going to attempt to reclaim his record. Later at a change of venue, Honnold alone in his van preparing mac and cheese, “Ya for sure I’m going to try and beat him. Yesterday I did it in 1:04 super casual style. There’s not a lot of people who play this game, so it’s exciting when someone beats your record. Even on a very popular climb like The Nose in Yosemite, it’s only once every couple of years that someone tries to go for the record. It’s not a super competitive field.”

Yet Honnold has made a career out of free-soloing, while continuing to push the limits of what is possible.

I read somewhere that you set out to climb every route in Squamish one summer? 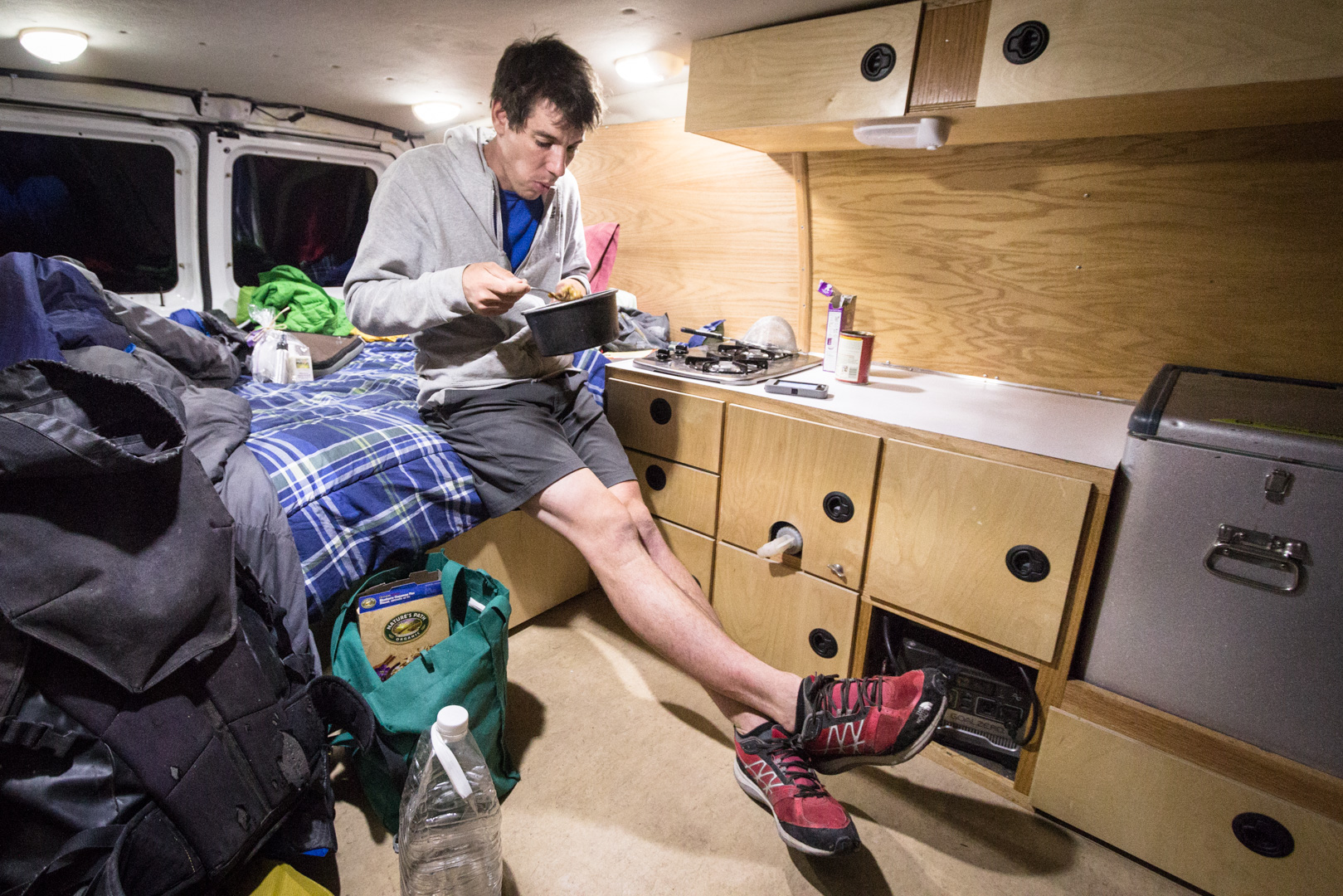 Honnold enjoying some mac and cheese in his home.

What does being a professional climber mean? Do your sponsors send you on trips?

They don’t send you on trips. For the most part you pitch what you want to do. Free gear. It’s pretty mellow.

Do you get a salary, or is it all photo incentives?

It’s a salary. I hate photo incentives and I’ve taken that out of my contracts. I don’t want to be spending all my time sending in photos and being like “this is worth so much” and what not. Pretty much all my contracts pay me a salary to do my thing the best that I can. I do all the media stuff, interviews, presentations, as much as I can — plus climbing of course. I do as much as I can.

At some point in your climbing journey, companies took notice and approached you?

Yeah, I suppose it was an organic thing. It happened through word of mouth. A friend of a friend was president of La Sportiva and they started sending me free stuff. From there it progressed, and pretty soon I was like “wow I’m a professional rock climber.” That took quite some time, for years I was just getting free stuff.

How did the Stride Health buildering video come together?

They approached me — well technically I have an agent now so they approached him. It was small start up in San Francisco and they wanted somebody young and hip who’s in their price range. It was sweet, I’ve never had insurance and they offered to pay for it.

Did they get permission for the climbs?

No they didn’t get permission. They scouted San Francisco by themselves, they were outdoor enthusiasts. I don’t think any of them were climbers but they were savvy — they emailed me saying they found some cool stuff for me to climb. I was like, “oh well, we’ll see” because normally when non-climbers scout like that who knows what’s going to happen. Turns out they took me to these really awesome objectives. Rad routes, really good climbing. It was all fast and discreet. We just did stuff and moved on. It was a lot of fun.

No security or police? 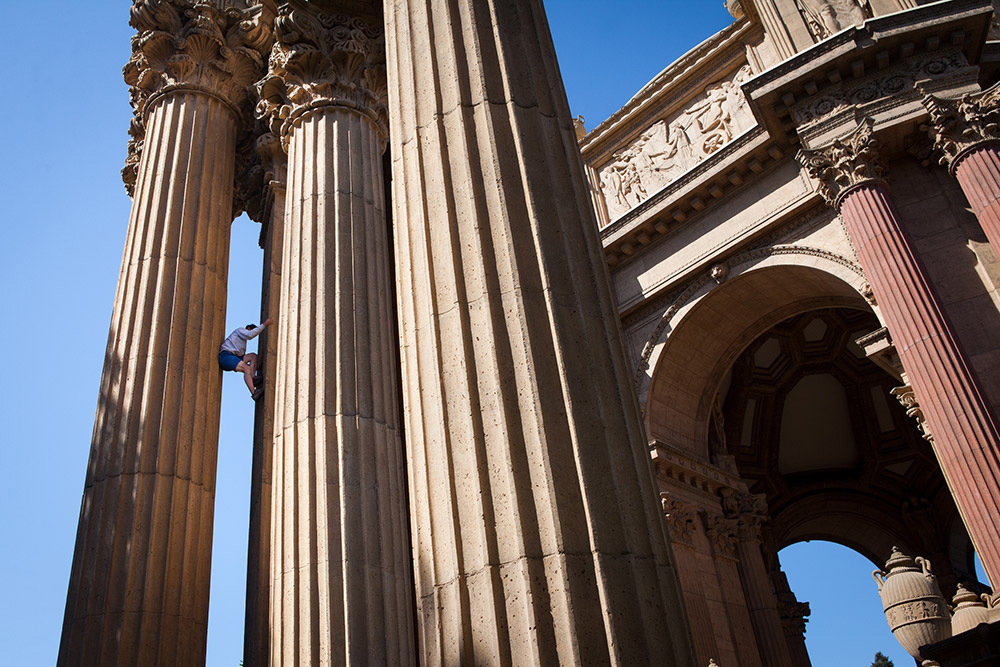 Had you done much buildering before this?

Yeah a little bit on the UC campus. Actually the other day I did get yelled at by a librarian or something. And some other dude said he was going to call campus security, I was like “whatever dude.”

You attended university there right?

Yeah I did civil engineering for a year, but I wasn’t fired up about it. I love climbing and did that instead.

On the Stride Health site it says “in his own words, Alex ‘wants to be a grandfather’.” Is it possible to retire with a rock climbing salary?

Hah. Yeah, well I’m saving up for retirement. The thing is I already live a retired lifestyle. I just chat with people and climb. I’ll definitely do this as long as I can. 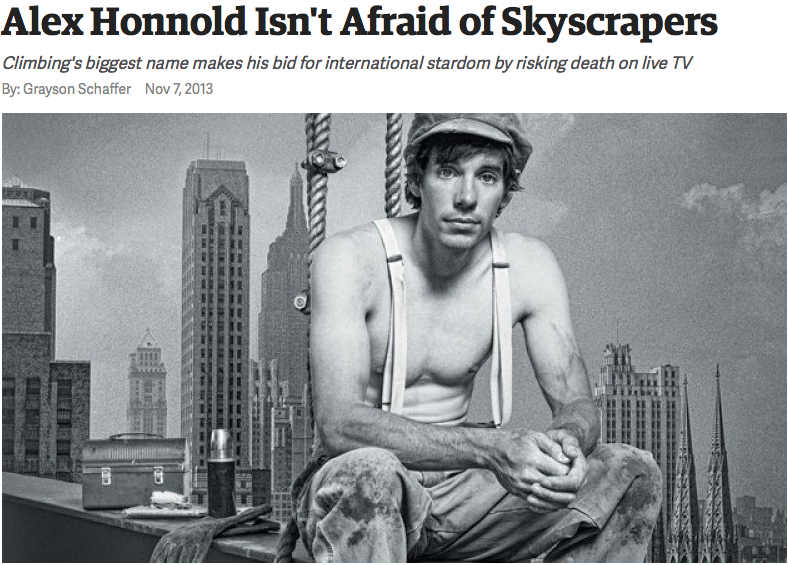 Is the Taipei 101 climb still happening?

That’s a fairly complicated story, but the long and short of it is that the TV airing seems to have probably died. It looks like we might go and do the building anyway and make a climbing film about it with Sender Films. It’s annoying the way it all happened. The networks were all crazy excited and Nat Geo was really committed to it, and then for some reason they all backed out. Meanwhile everyone at the top got fired this year, so now the project is dead and nobody wants to get into it.

At this point I just want to do it because everyone asks me about it. If we make a climbing film out of it, it’ll look rad because it’s an amazing building. Then maybe the TV executives will see it and say “oh, let’s do a TV thing.” Also, it’s been annoying how they’re worried about safety, and insurance, and this and that. It’s like, “Dude it’s not that big of a thing let’s just go and do it.”

The building owners have been really supportive and they’ve been cool about everything.

Are the owners paying you anything?

I don’t think so.

You should ask your agent about that. Alain Robert makes a serious amount of money climbing buildings. Property owners pay him big money to climb for grand openings in Dubai and stuff like that. It’s great advertising.

Yeah I know, but it’s kind of a different deal because I don’t even care.

What’s this for again?

“Dudes doing weird things at night.” Maybe you should call the website that instead. You might get more hits.

A week after this interview, July 20th 2014, Alex beat Marc-Andre’s speed record of the Chief — bottom to top in 38 minutes.

In August, Honnold free soloed University Wall (8 pitches, 5.12a). A few days later he climbed 290 pitches on his 29th birthday.

[2018 Update: On March 5th, 2018, Marc-André LeClerc and climbing partner Ryan Johnson failed to return from their climb on the north face of the Mendenhall Towers, in Juneau, Alaska. Suspected buried in an avalanche, their bodies were never discovered.]