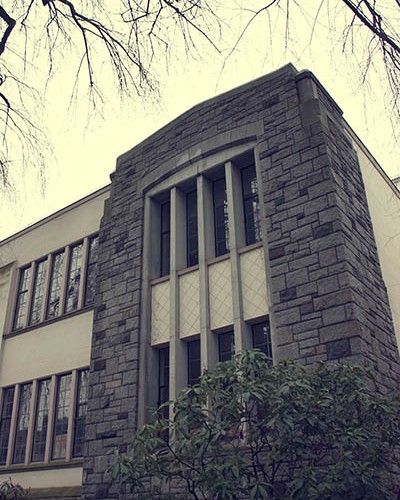 This is a great route which was not mentioned in the 1968 guide — likely because it would have been a very bold lead (read: solo) in its day, and the pioneers weren’t so much into top roping. We, the modern generation, don’t have such hang-ups. 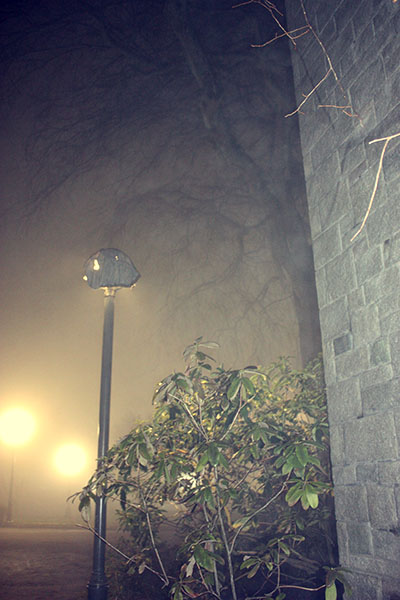 Rope bag for a light shade. 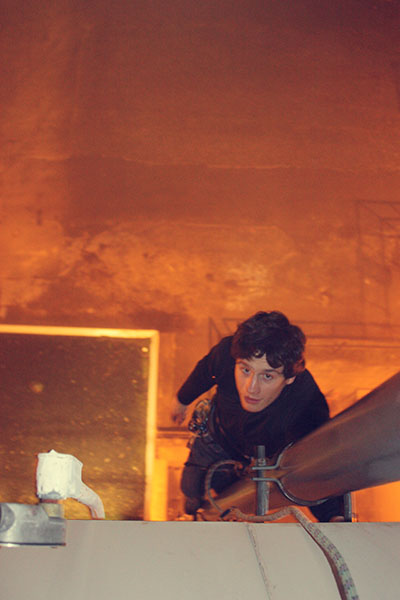 Grant seconding up the pipe. 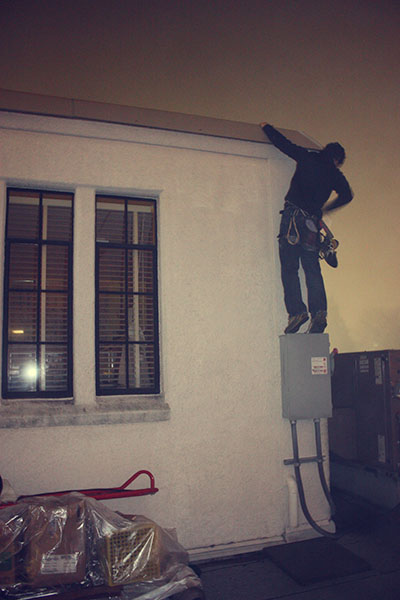 Do NOT step on the large, red switch. 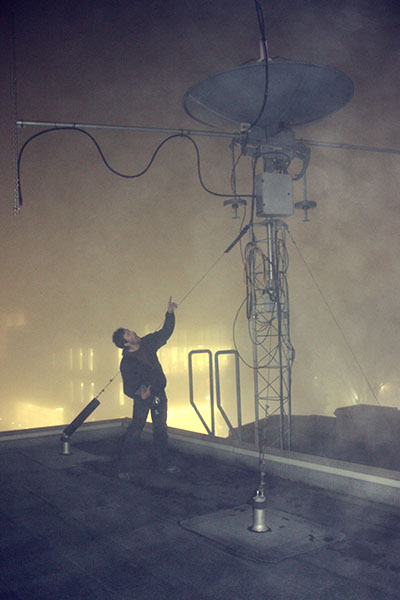 I bet they get all the channels. 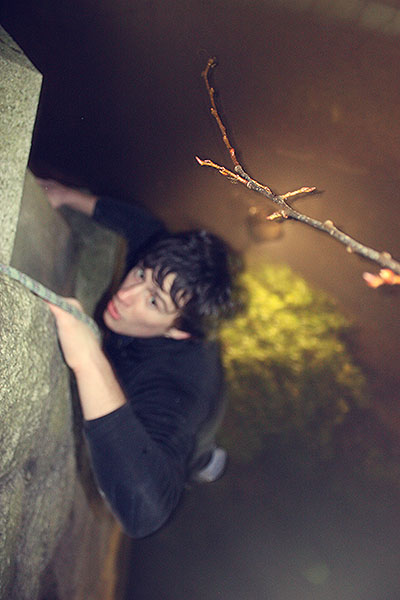 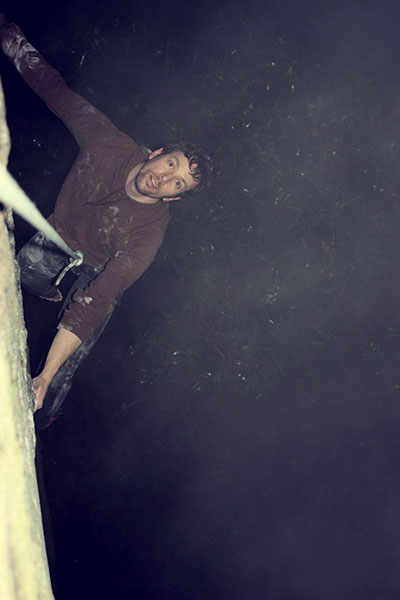 Judging from the amount of chalk I used and the look on my face, I was totally OK.

In 2000, Jay B. and Conor R. gave it a burn by throwing a rope over a branch of the nearby tree. Conor recounts:

“We tied a climbing shoe to a piece of cord and hucked it over the branch (successful after about 20 tries) then pulled up a rope. (Or did we just use a half rope, Jay?). I seem to remember we managed to get about 1/3 of the way up, maybe a bit higher – it was tricky fingery climbing. We’d get a bit higher each time, then bail, swing, and have to start from the bottom again. So on a scale of one to Tricky, I’d say it was pretty tricky. And yup, the swinging was fun! We did it fairly late at night so we had to talk to a bunch of curious passers-by, but no campus cowboys.”

Given the route’s cruxy top, and that the branch is level, if not lower than the route (depending on which one you manage to snag) a full ascent would truly be exciting.

For Grant and my ascent, we took the easy way up the back, dropped a rope down and belayed from the top. This made for some varied climbing — a bit of a campus multi-pitch.

Vancouver is in a weather inversion right now, meaning it has been non-stop foggy for about two weeks. Hennings is located along a major thoroughfare for students — connecting the Student Union Building to Place Vanier residence. The route sits about 15′ from the sidewalk. There’s also a big ol’ light illuminating the face. We took care of this latter detail by throwing our rope bag over the light. Given the foggy dampness, this alone was rated at about 5.10. Luckily all the technical climbing is on quarried granite, not metal.

The pipe around back makes for a nice lead. Bring some slings for protection. Setting up an anchor to belay the second is a little tricky. Use the rope to sling the huge ventilation unit back on the lower roof.

Next up is getting on the summit roof, which is trickier than it looks. Stand up on the breaker box. If you can’t reach the positive hold set back from the edge, you’ll have to jump for it.

After that you are golden. The big alien looking dish scares me a bit. It seems a likely carcinogen. Use the ladder at the base of it to anchor the belayer for the arete ascent.

We used the big round metal chimney closer to the building edge to rappel off. It’s nice and smooth for a double rope rap, and you won’t have to leave any gear behind. I probably would’ve used this for a belay anchor as well, but I wanted to sit up on the edge and take photos. If Grant fell to the right of the arete, he’d pull me towards the anchor and we’d both hit the ground. (This’ll probably only make sense to someone who actually goes up there and looks at the anchor locations.)

Grant climbed first, initially starting on the arete, and traversing to the sidepull on the left as the climbing got more difficult. He made it look easy. My ascent was a bit more of a hang-fest, especially at the cruxy top. I should climb more. We agreed that the full arete would be a solid 5.12, and using the sidepulls to the left brings things down to the low 5.11 range.

Good route, good times, and nobody spotted us which is almost unbelievable.
Multi-purpose rope bag.
Judging from the amount of chalk I used and the look on my face, I was totally OK.