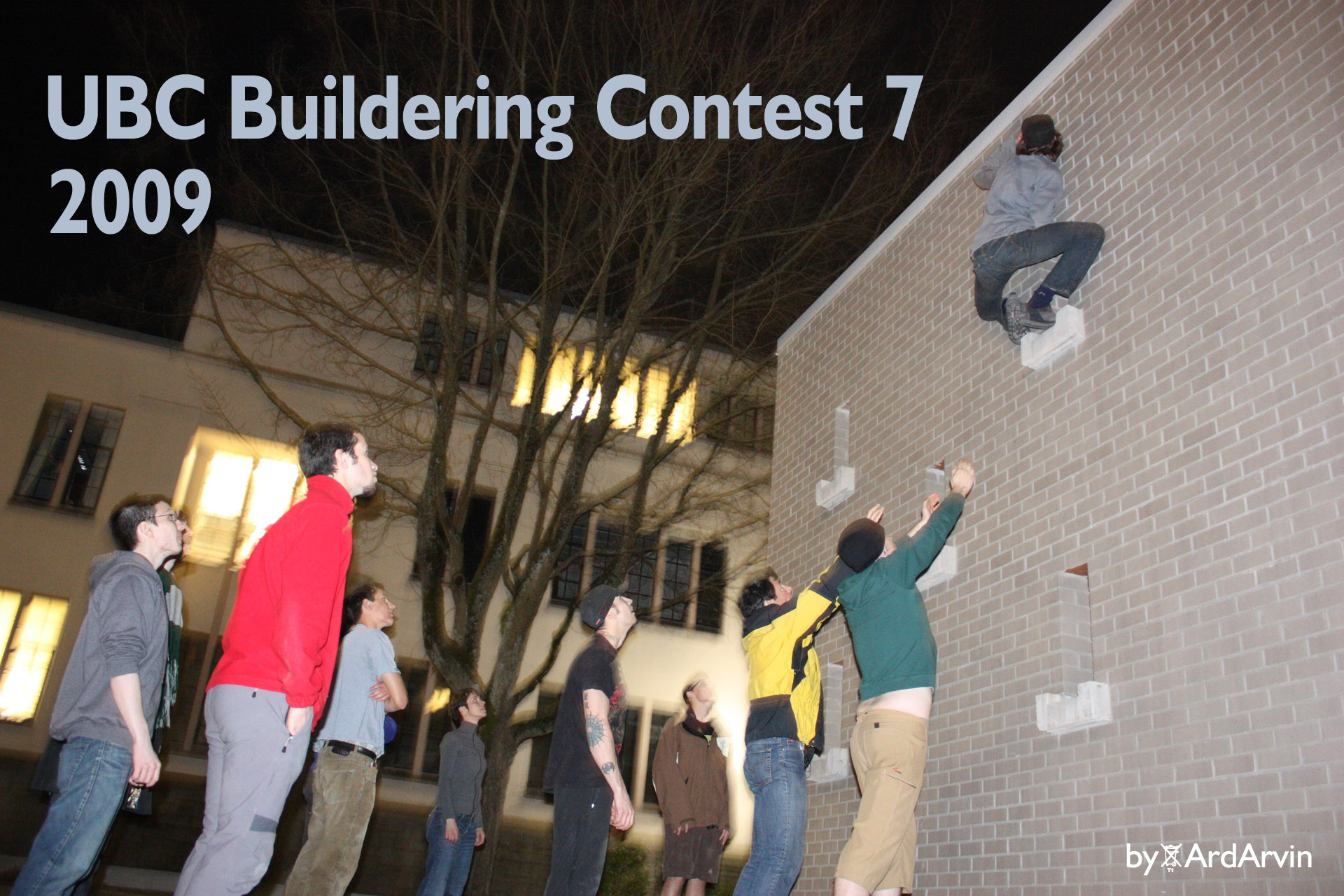 April snuck up on me this year. I wanted the competition to be held before the end of classes, which meant giving people only four days notice. Despite the short notice, we had a respectable twenty builderers attend. Some wore Cliffhanger (a local climbing gym) jackets. Cliffhanger STAFF jackets. Eek…real climbers. I hoped this wasn’t going to be a cakewalk.

I could bore you by going into details of each climb, but that’s what the new guidebook is for [edit: guidebook down right now, hope to get back up soon.]

In the end, three people climbed all the problems. A bonus round was held, Lower Koerner Campus. I hoped someone would be eliminated. Shaun and Jan both on-sighted it, and Tim, well he left before I announced the bonus round. Too bad for him. The winners settled on the prize, a UBC Croquet Society t-shirt, over a rousing game of rock-paper-scissors. Shaun took it, making up for his lousy roshambo skills from last year when he also tied for first. Go rock, nothing beats rock.

For those wondering about the UBC Croquet Society t-shirt prize, croquet is a long running code word for buildering at UBC, particularly useful when advertising such events on campus. Sure, this means you have to be in the know, and it is theoretically possible that someone could show up expecting to play actual croquet, but that’s never happened. There is an official UBC Croquet Society, but they try desperately not to play the game. Rumour has is that the club founder uses the club to get free money from the student government, which he and his buddies spend on beer. In any case, they did made some really nice t-shirts last year, and Christian picked up a half dozen for us builderers. They were quite surprised by the surge in interest in their club. Yay for croquet!

People parted ways after the award ceremony, but I wanted to re-shoot some photos from the roof of the Koerner Library for the new guidebook. Grant and Shaun tagged along. The route’s technical crux is at the bottom, a rounded cement bulge likely designed specifically to prevent people from climbing higher up. We climbed the north east corner, the most secluded choice but the most serious as the buldge is 20 ft above the cement.

I headed up first, making the bulge look more awkward than it usually is. Grant followed. Next thing I know Grant is sailing through the air. It’s quite spooky watching someone fall from a height where you know there’s no hope of walking away from it unscathed. He hit the ground the best he could, but still hit hard. He tried to get up and walk it off, but wasn’t able to put any weight on his right foot. We hoped for a heel bruise at best, but it turned out to be a fracture.

A sour note to end an otherwise brilliant evening, but Grant is in good spirits. “In a way I’m glad I learned my lesson, never treat anything with nonchalance when gravity is involved. I’ll be back out there soon.” Words to live by. 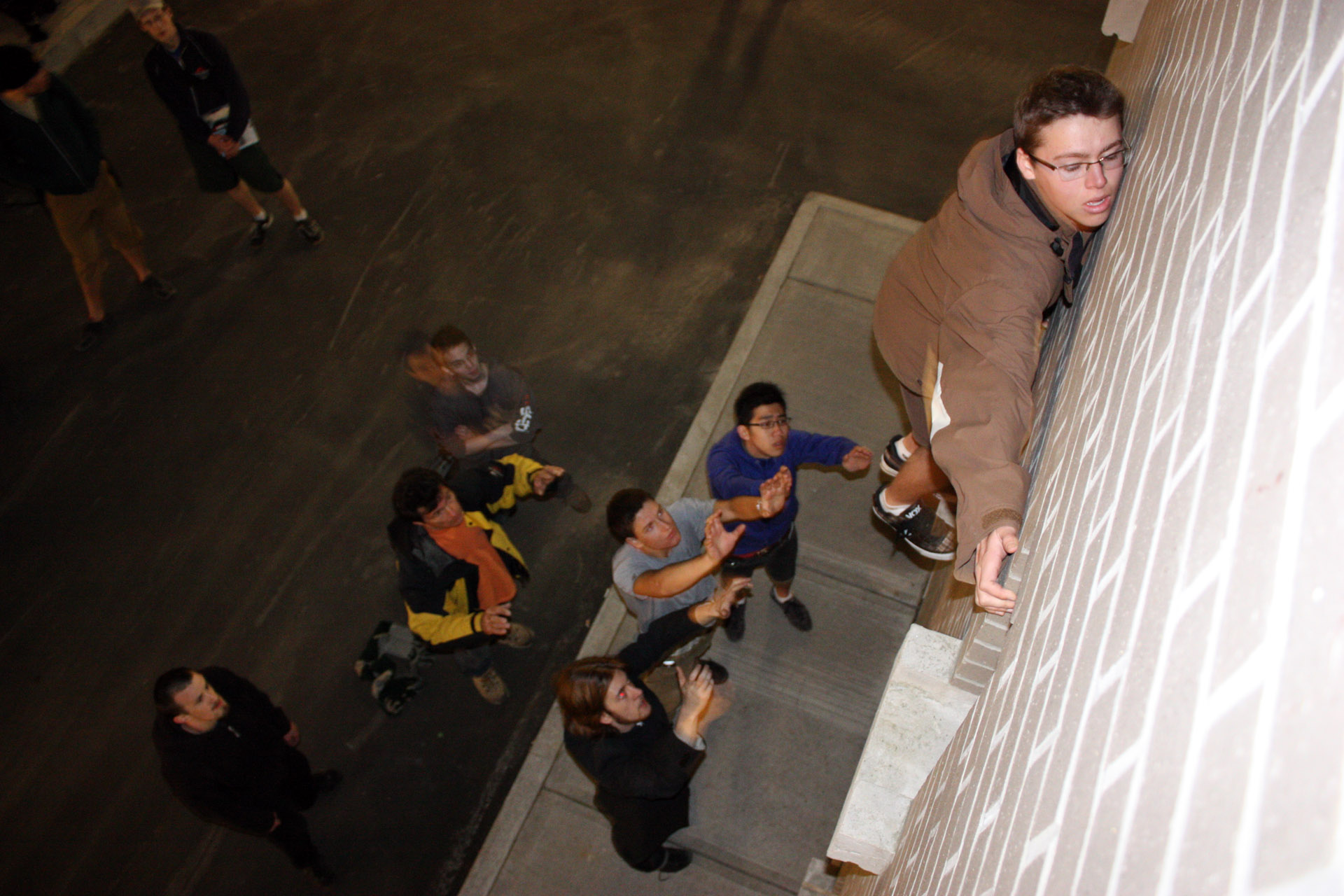 A balancey rock-over with no hands gets the heart pumping. Chemistry Alley. 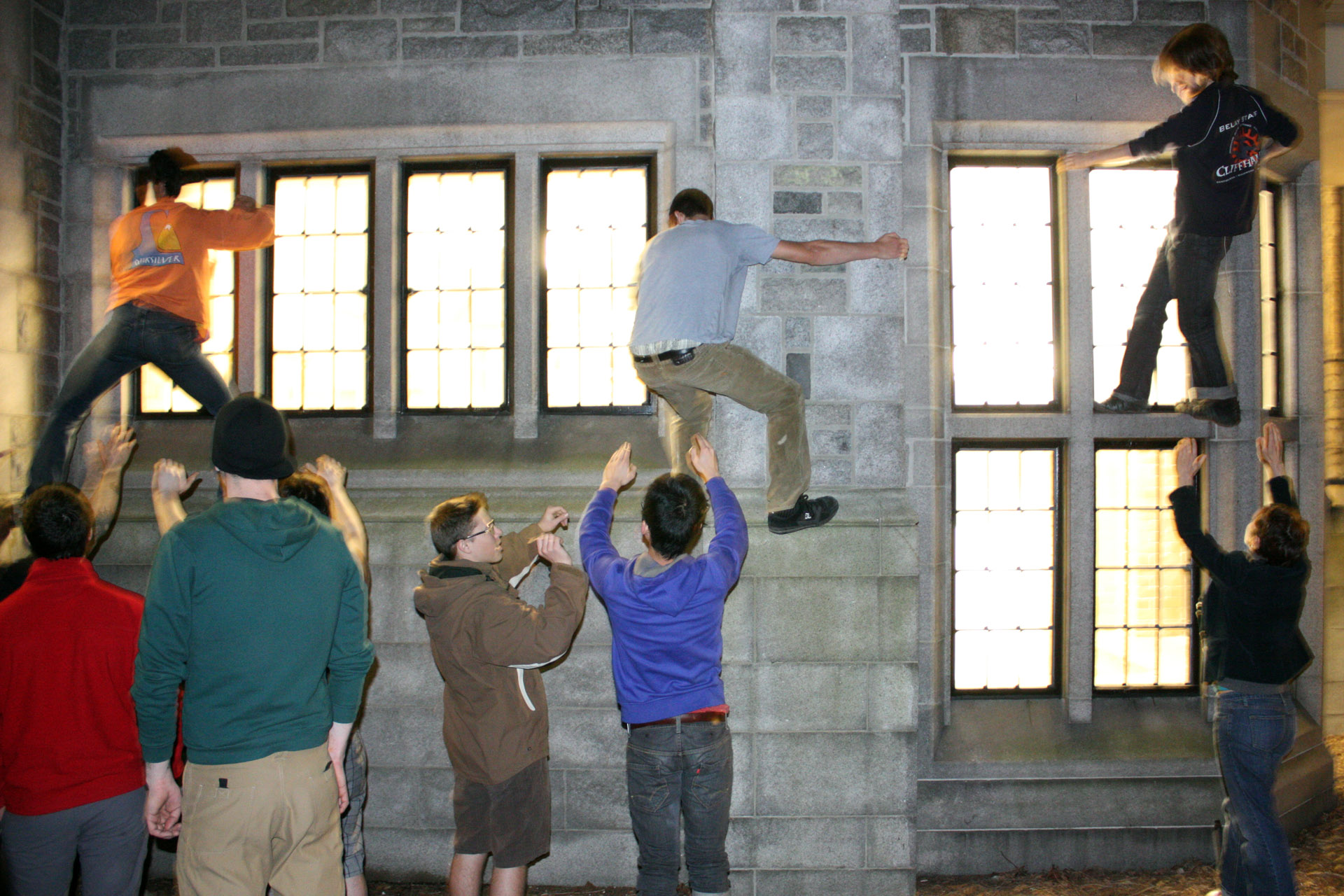 The ever popular Chemistry Traverse. 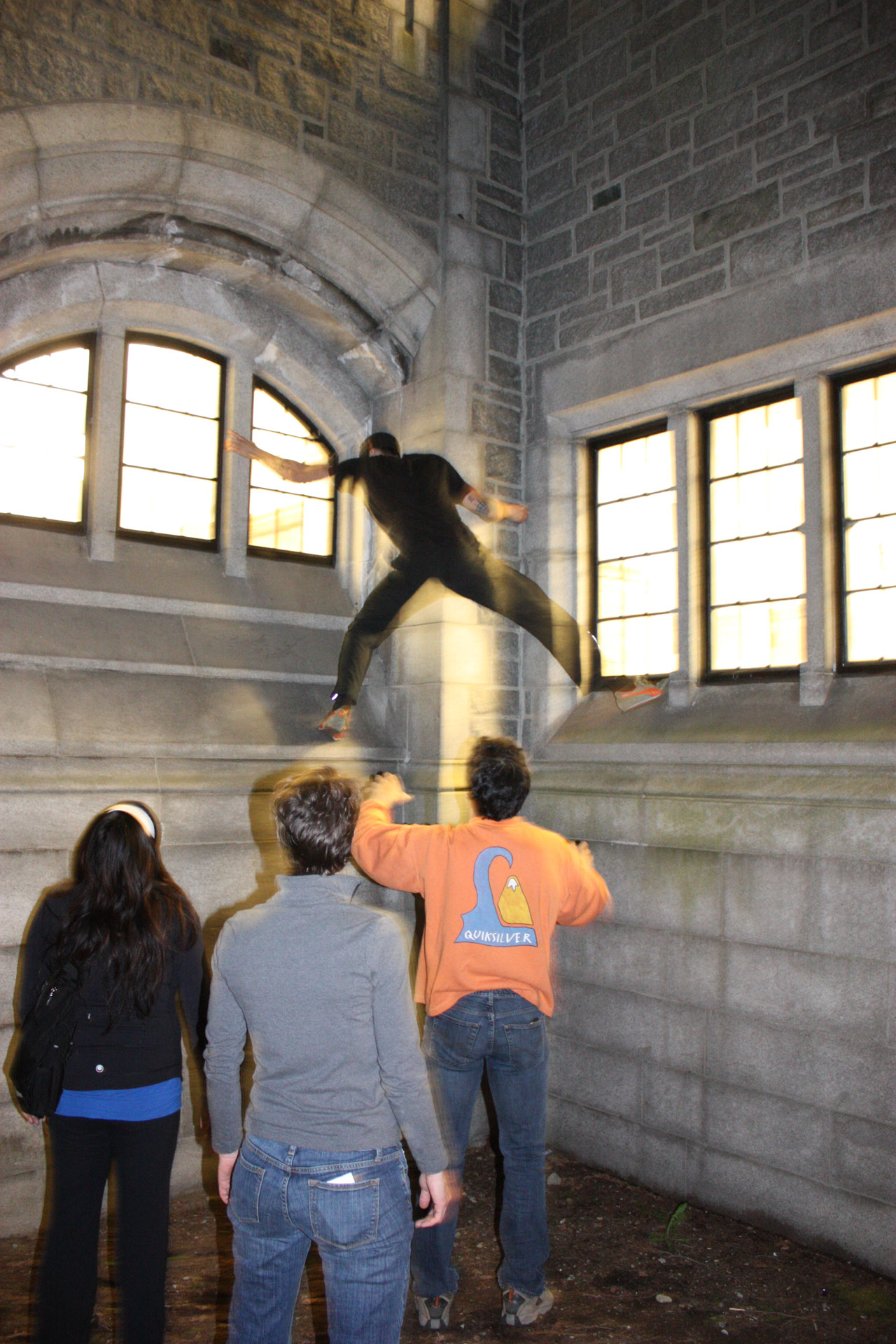 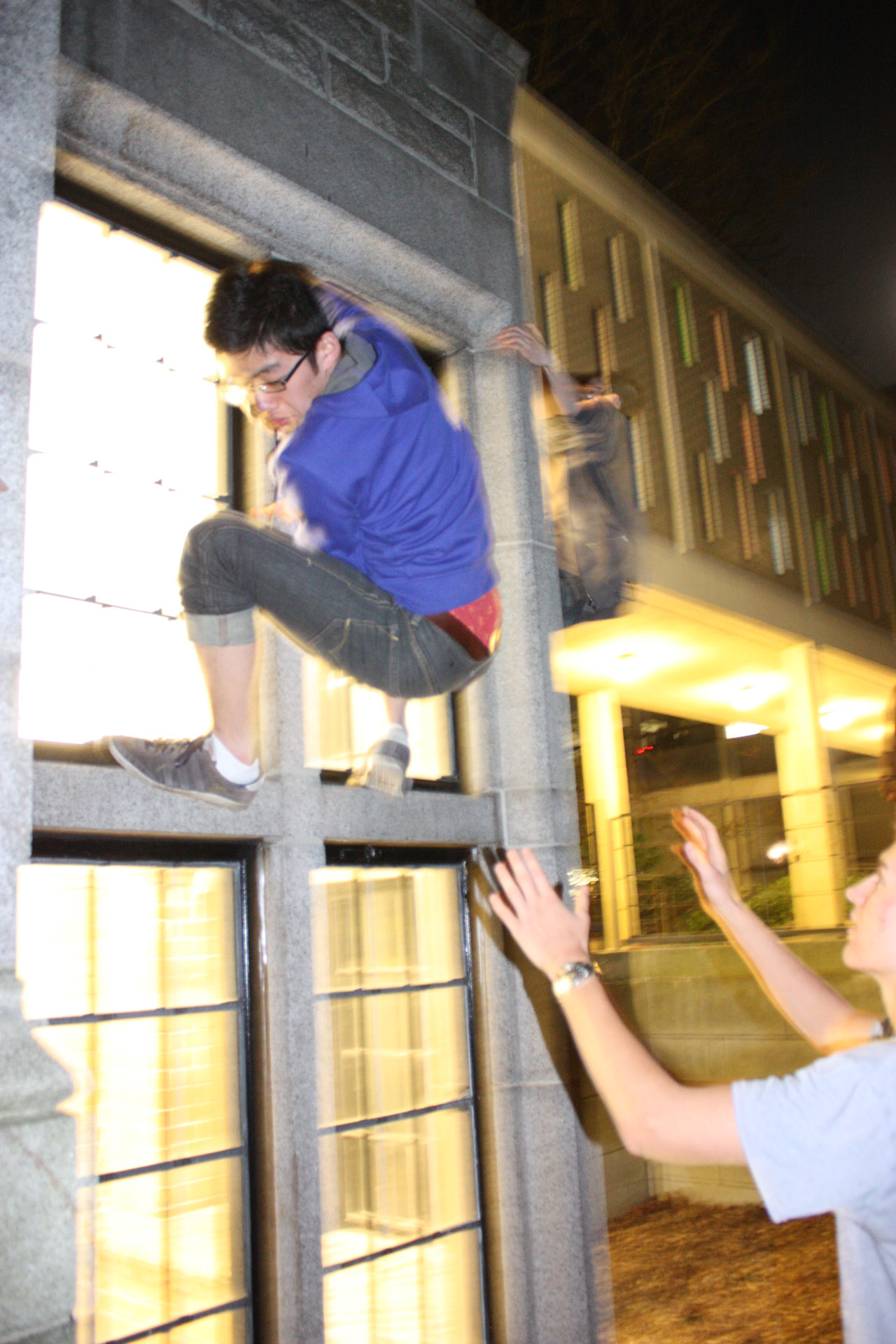 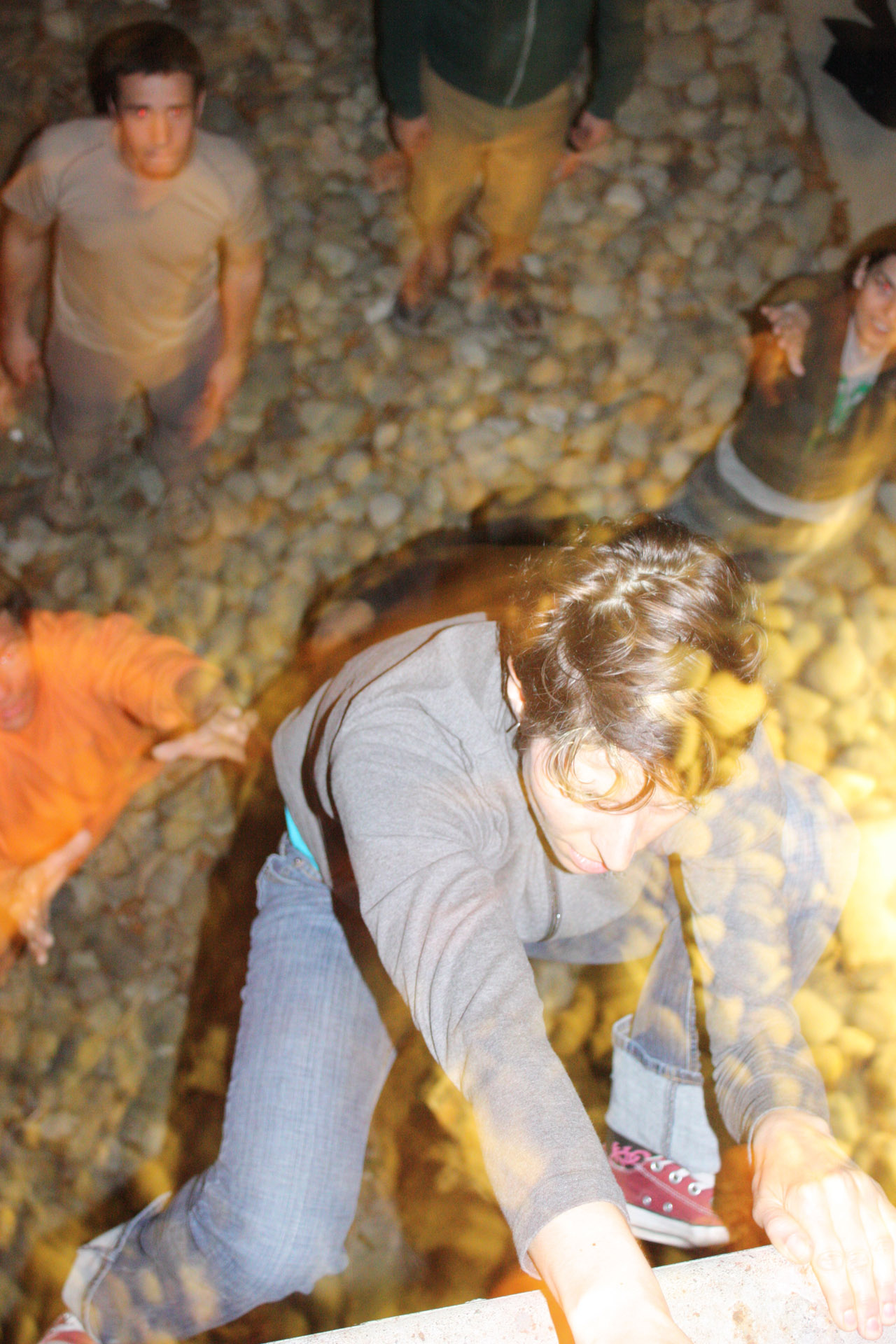 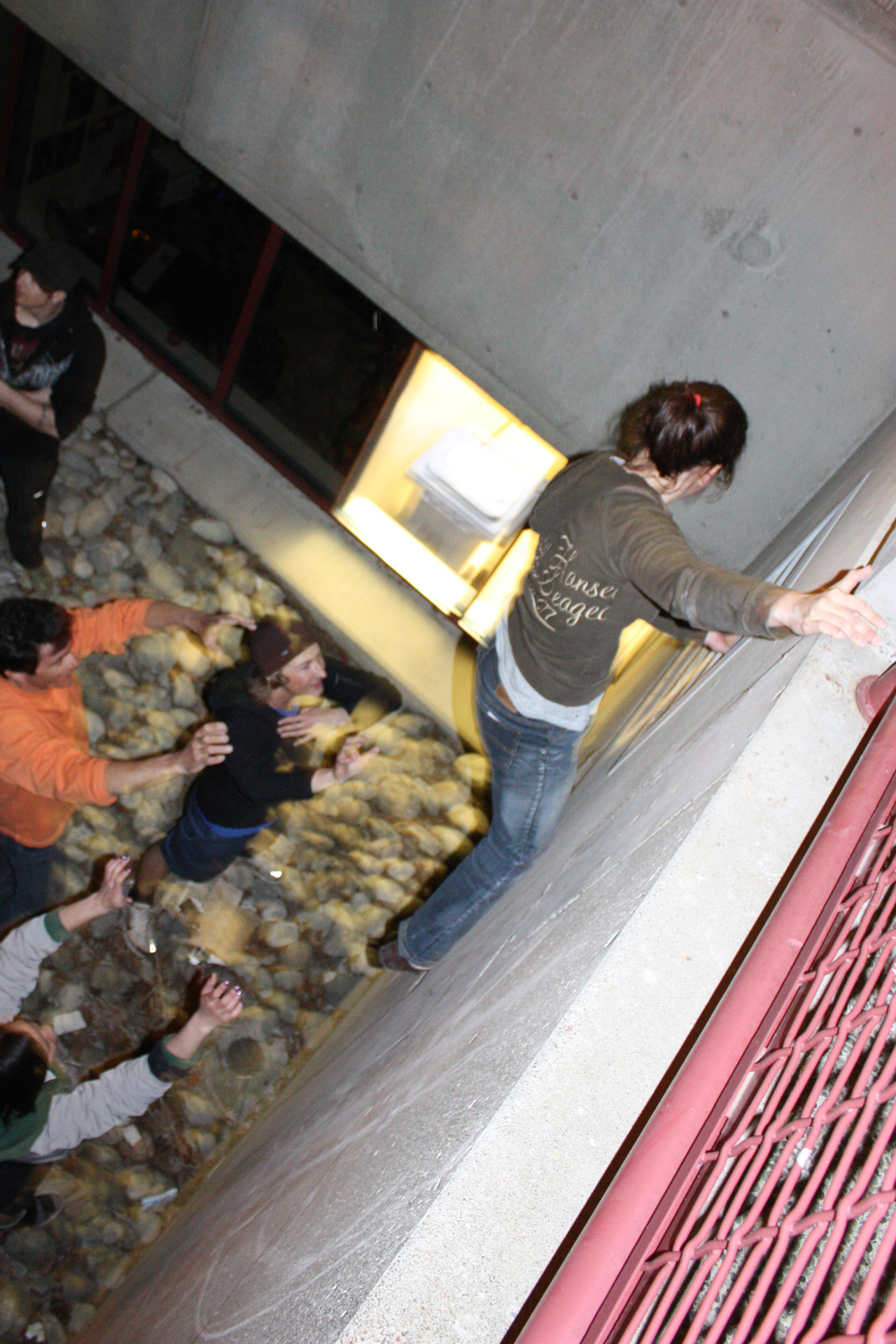 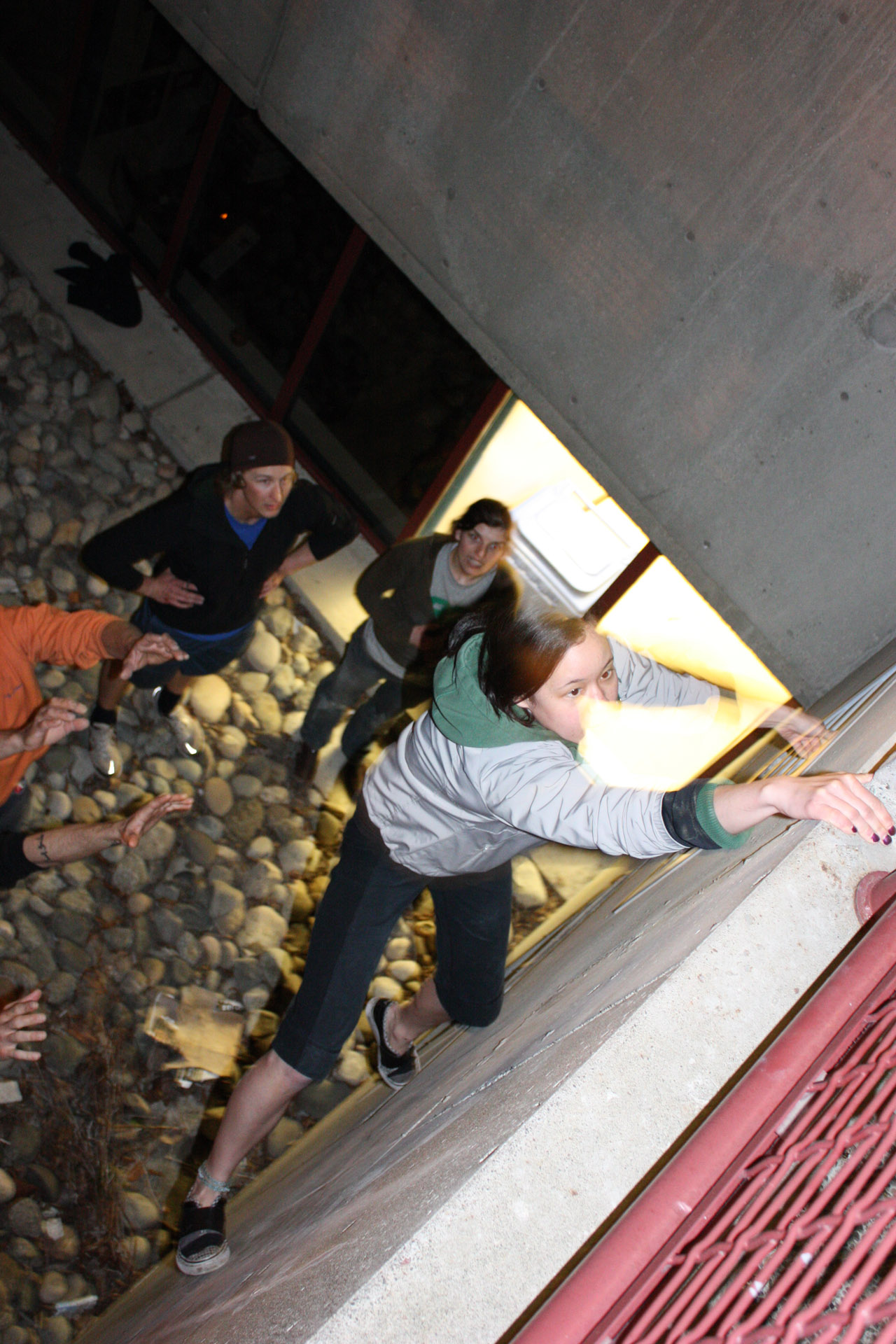 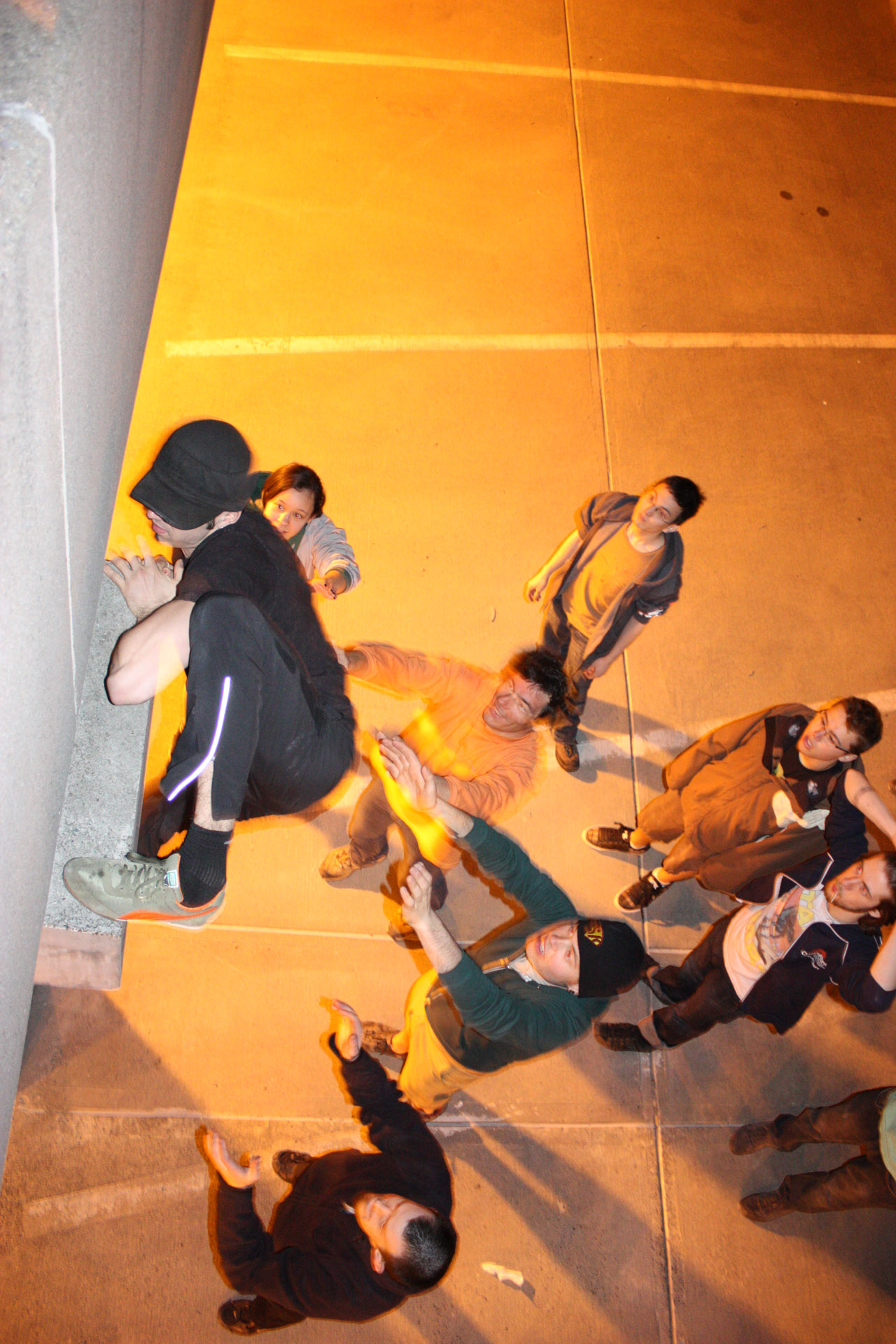 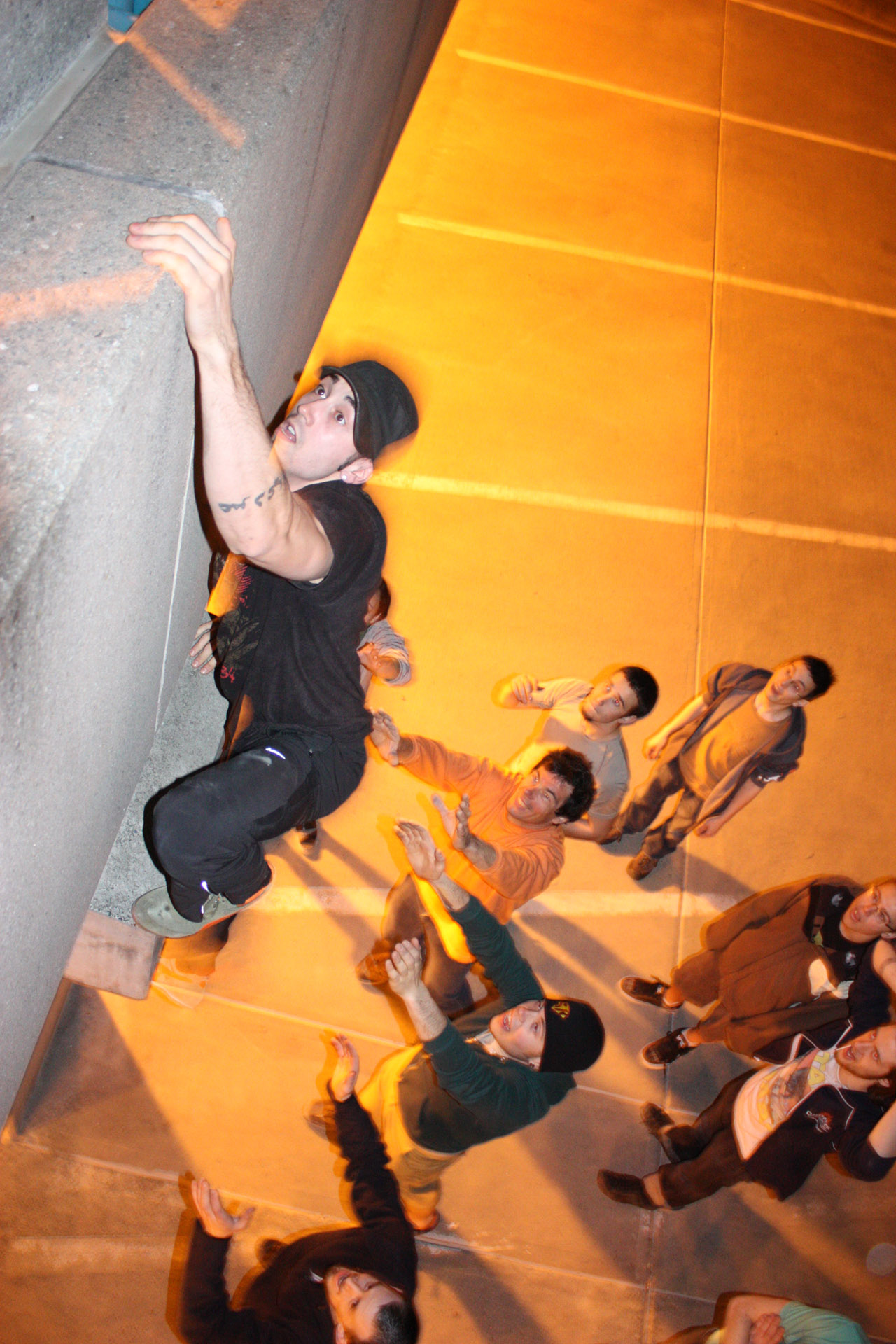 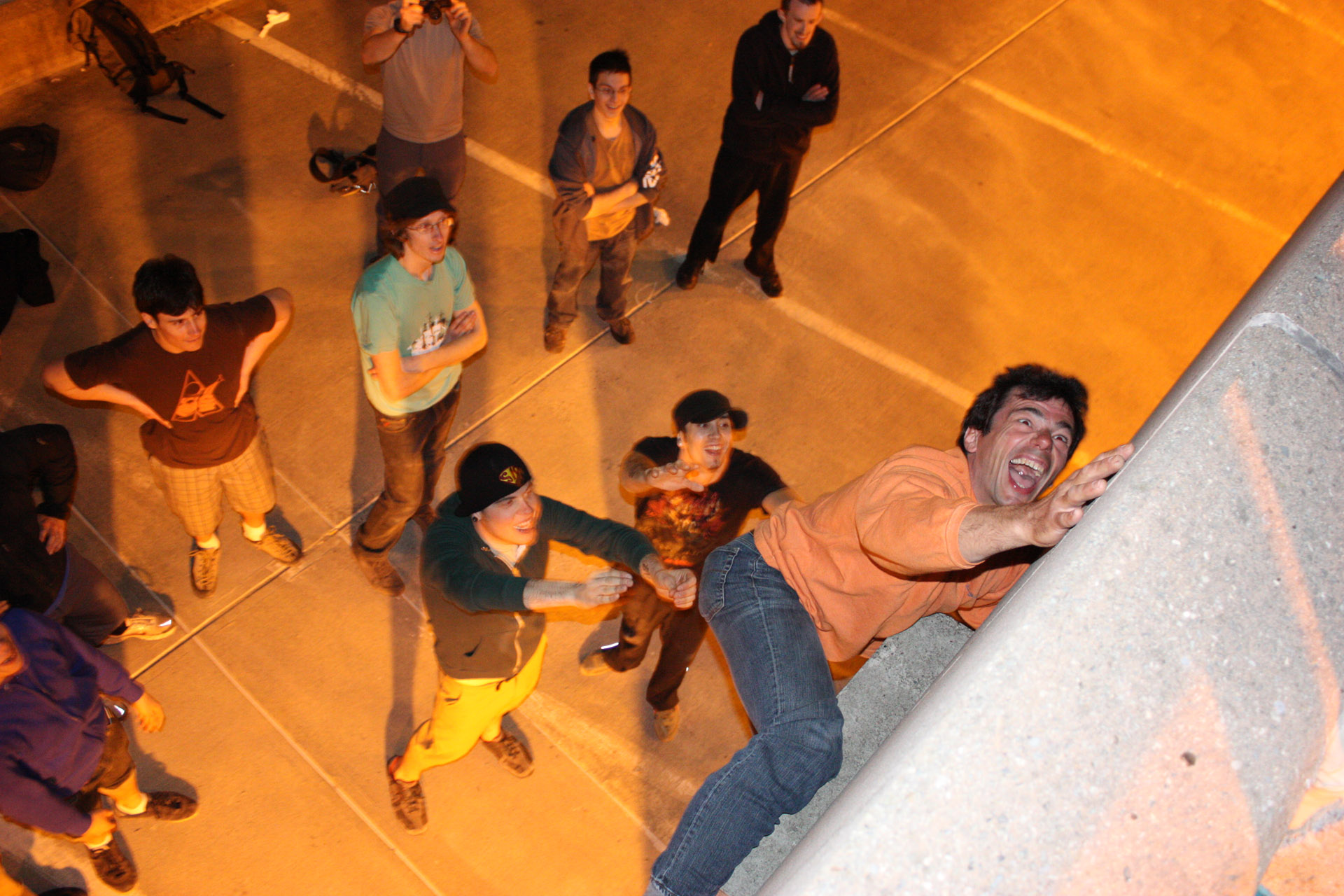 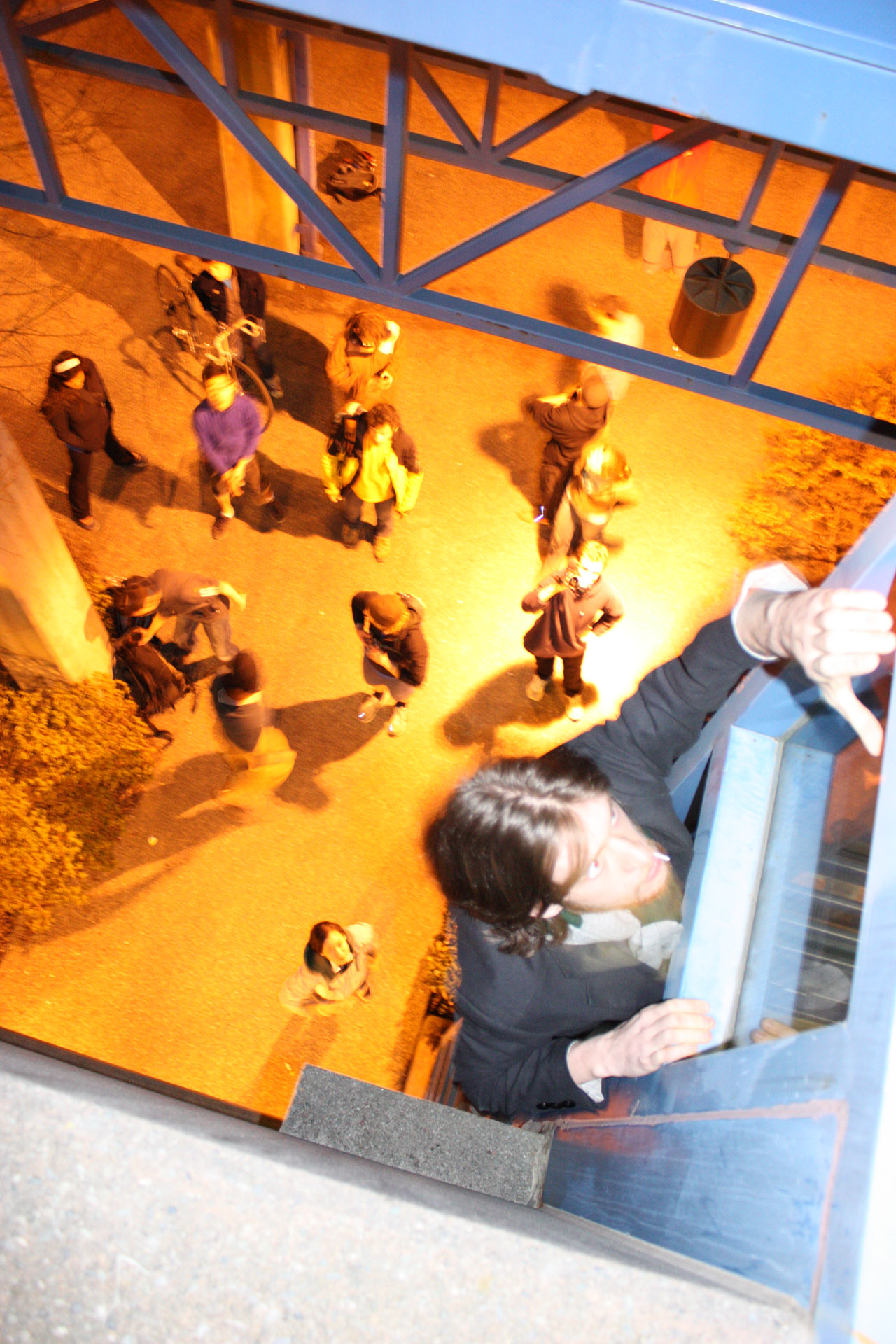 The easiest yet most serious problem of the night. West Parkade Windows. 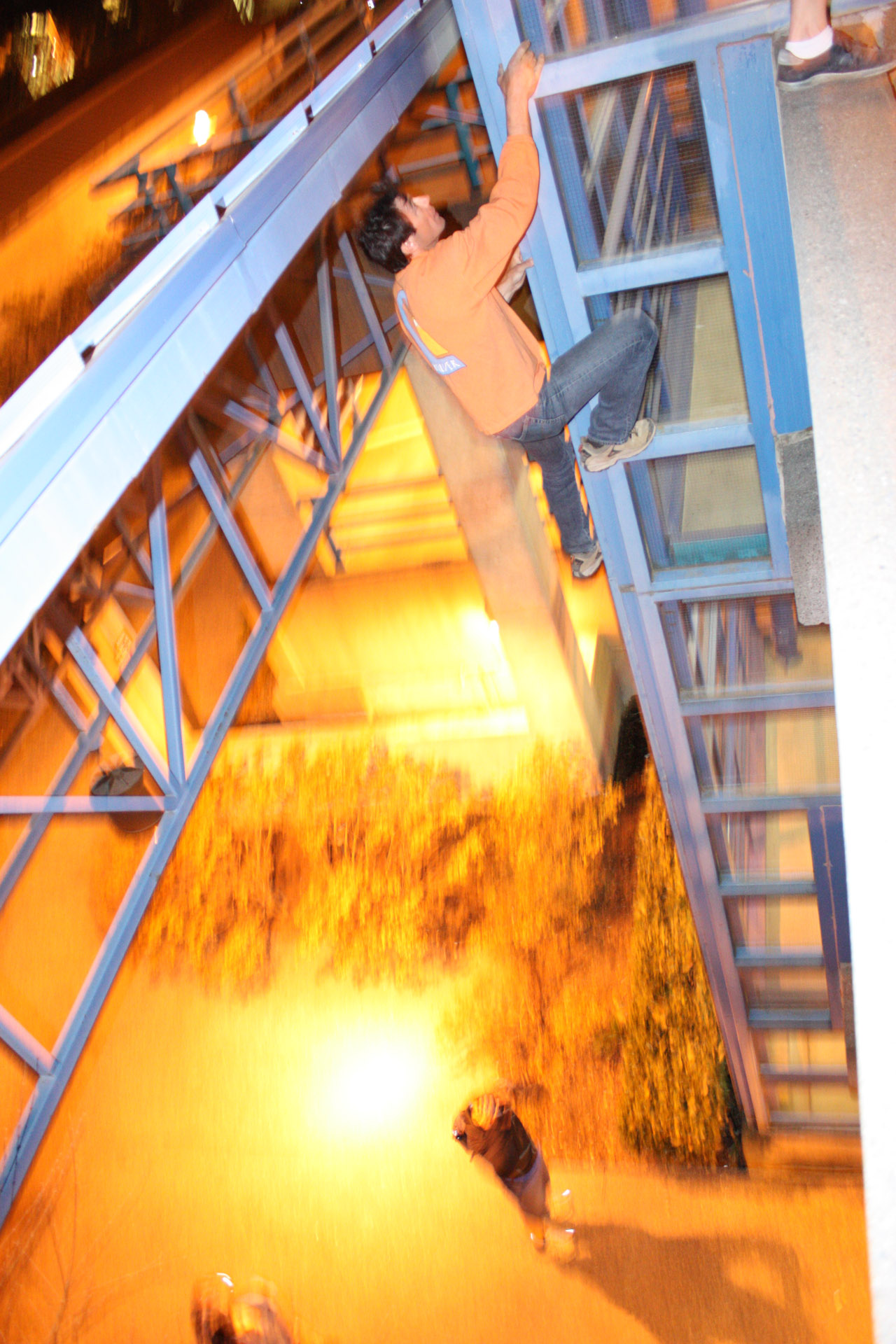 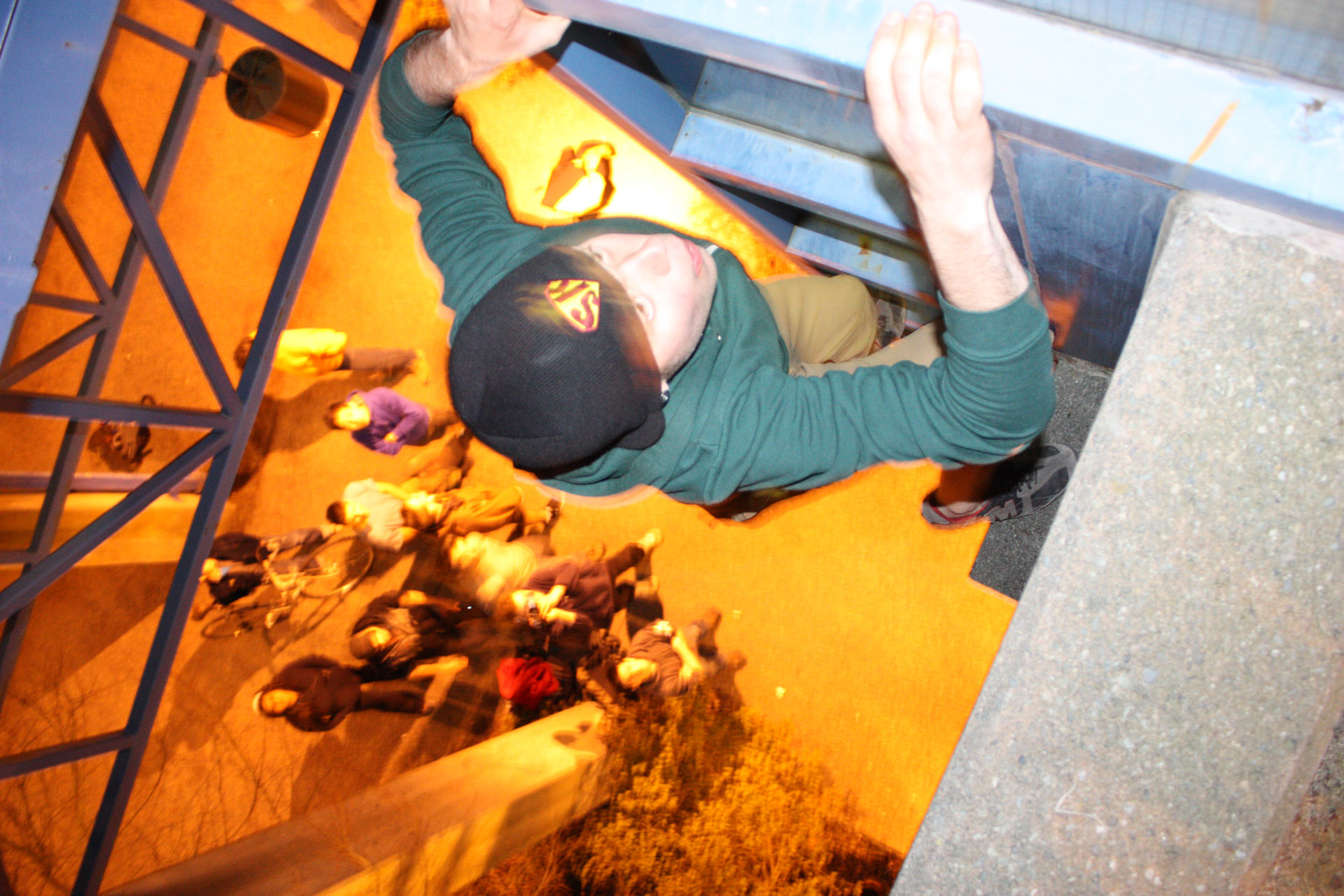 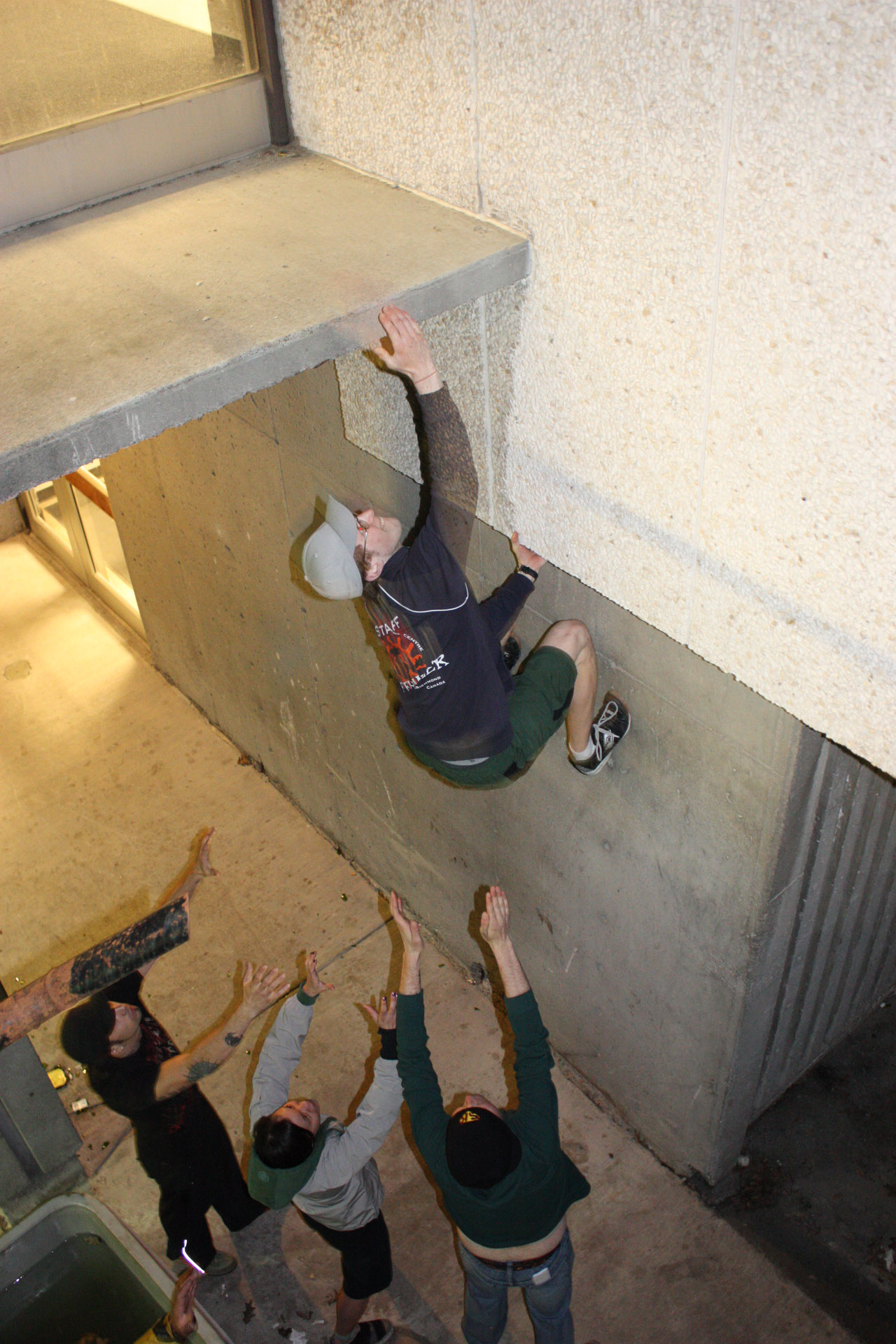 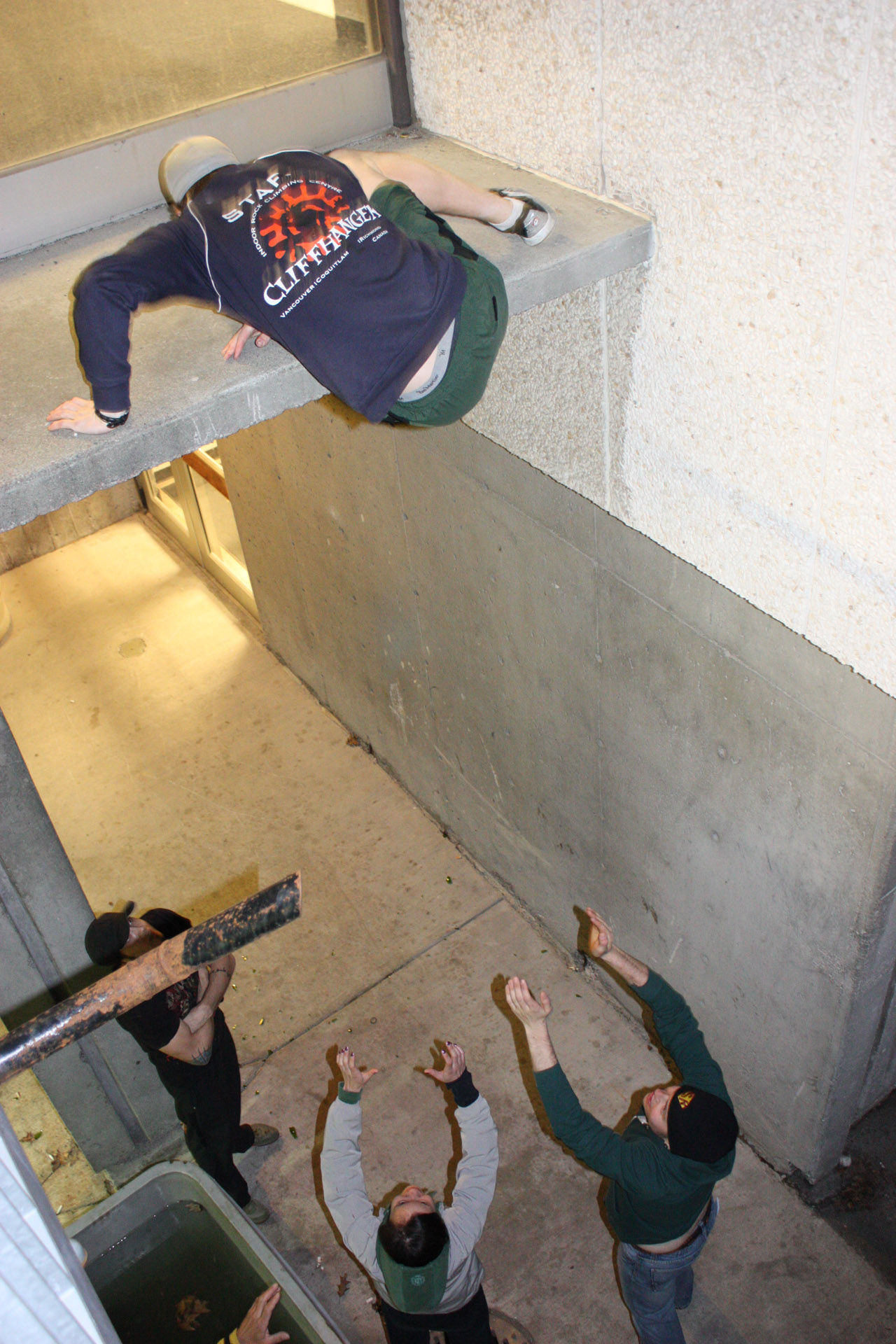 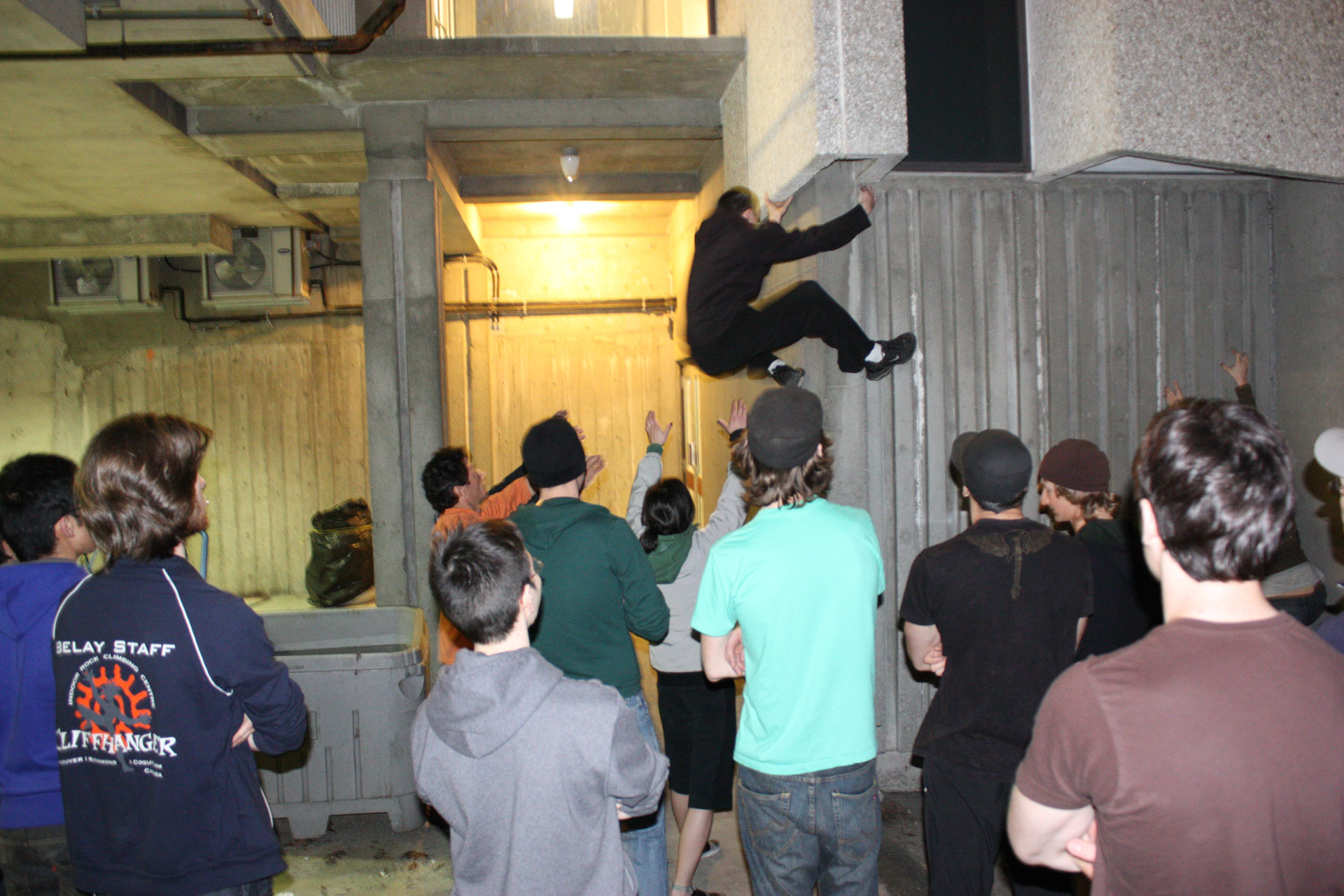 Shaun at the crux. Bio-Science Undercling. 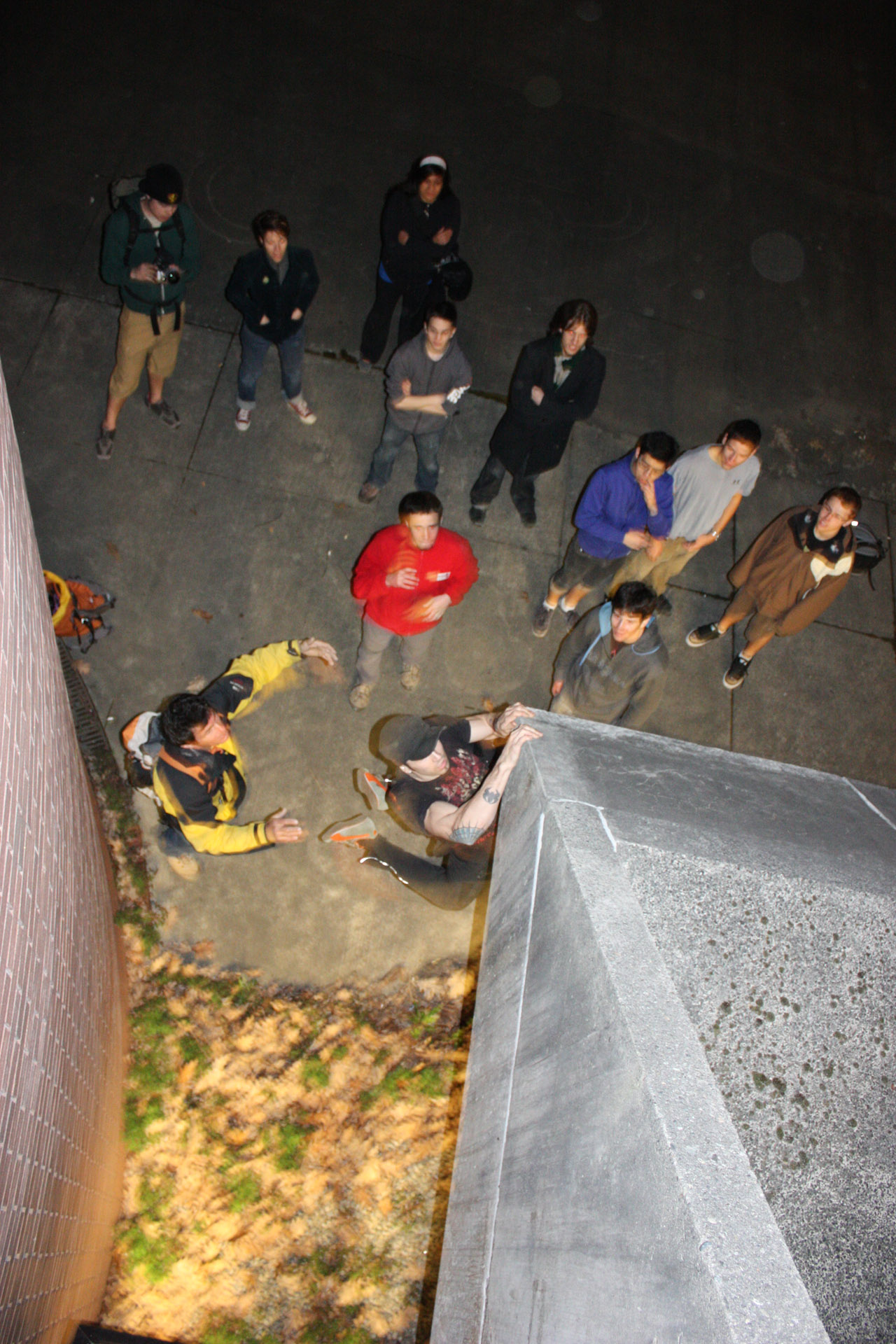 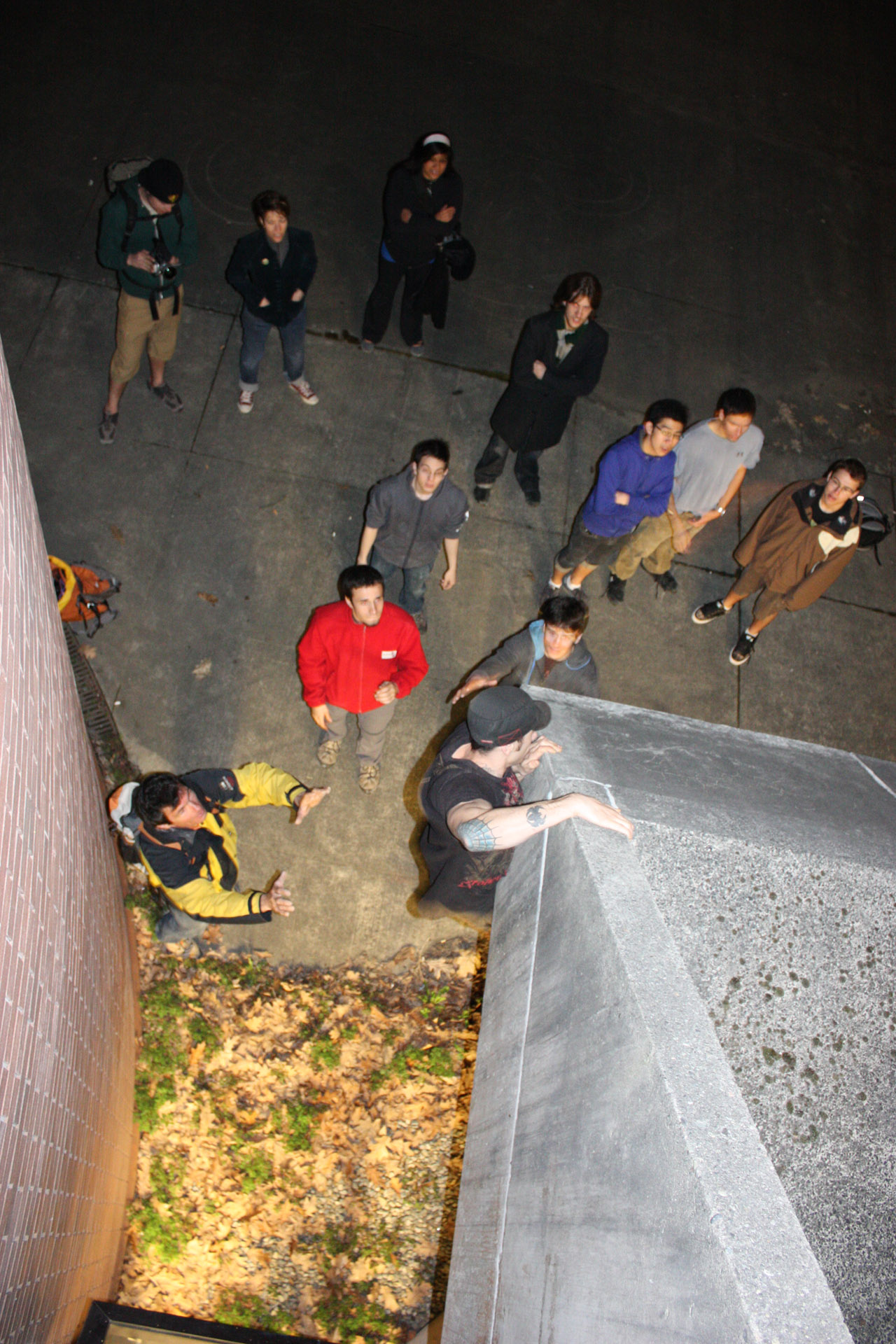 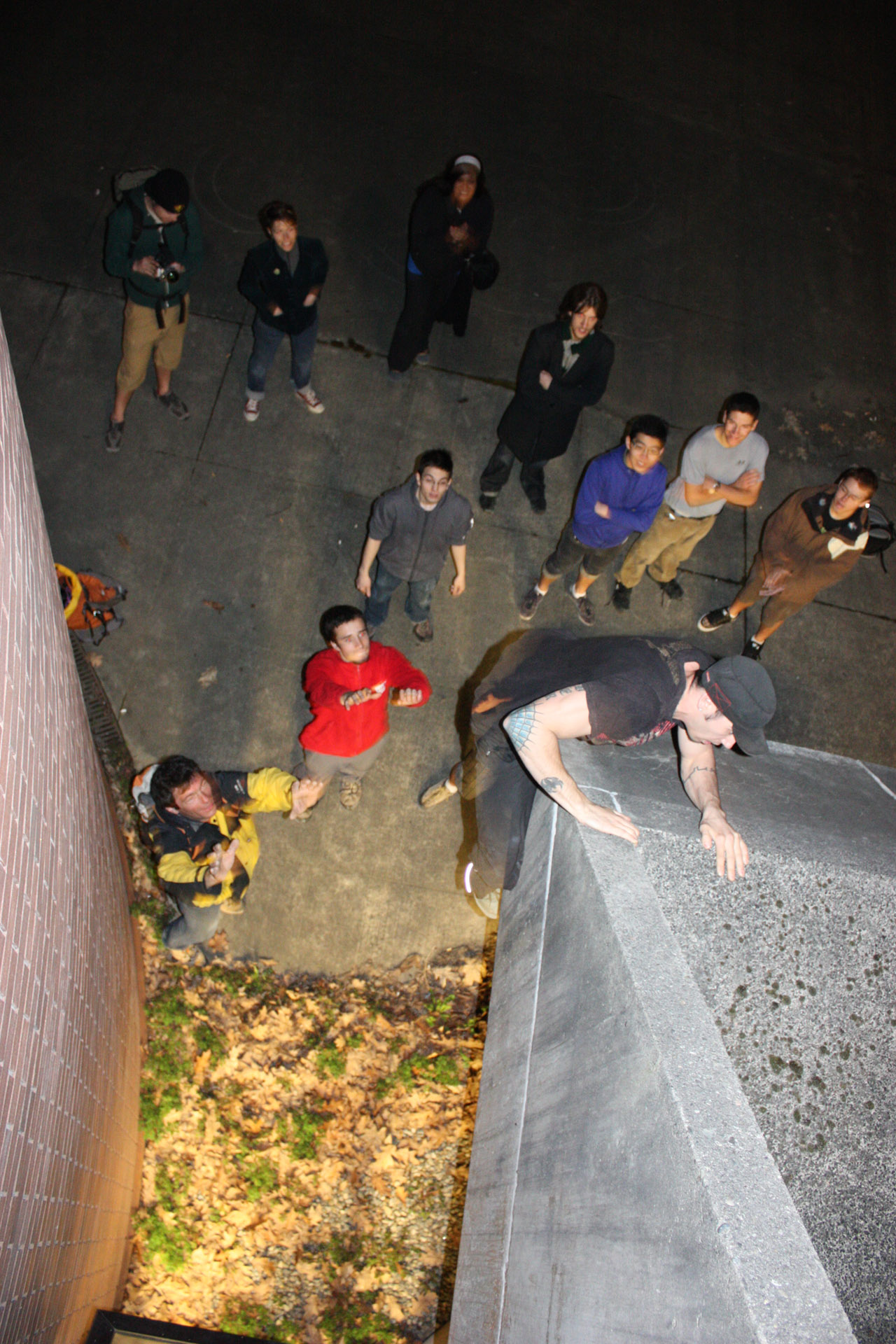 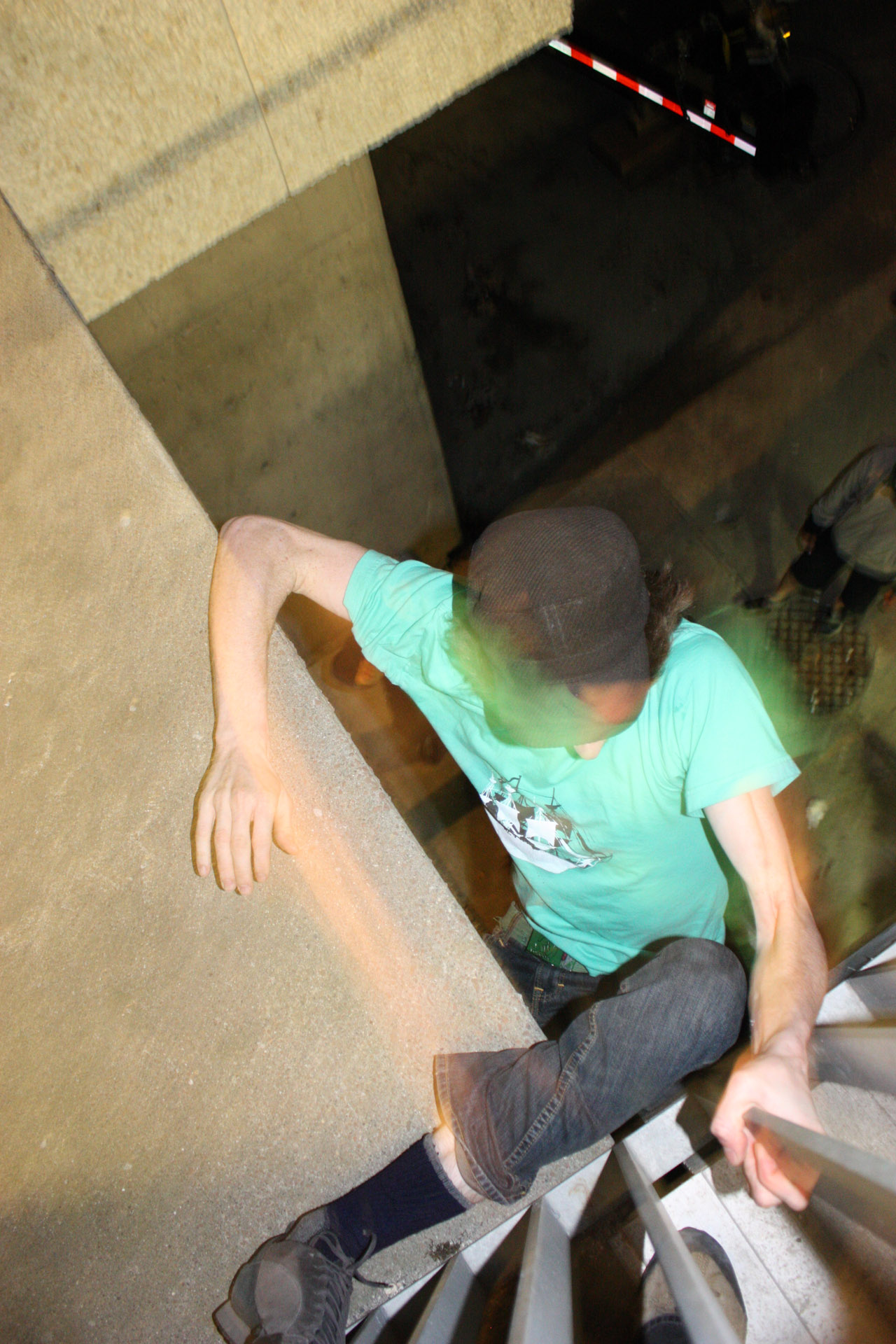 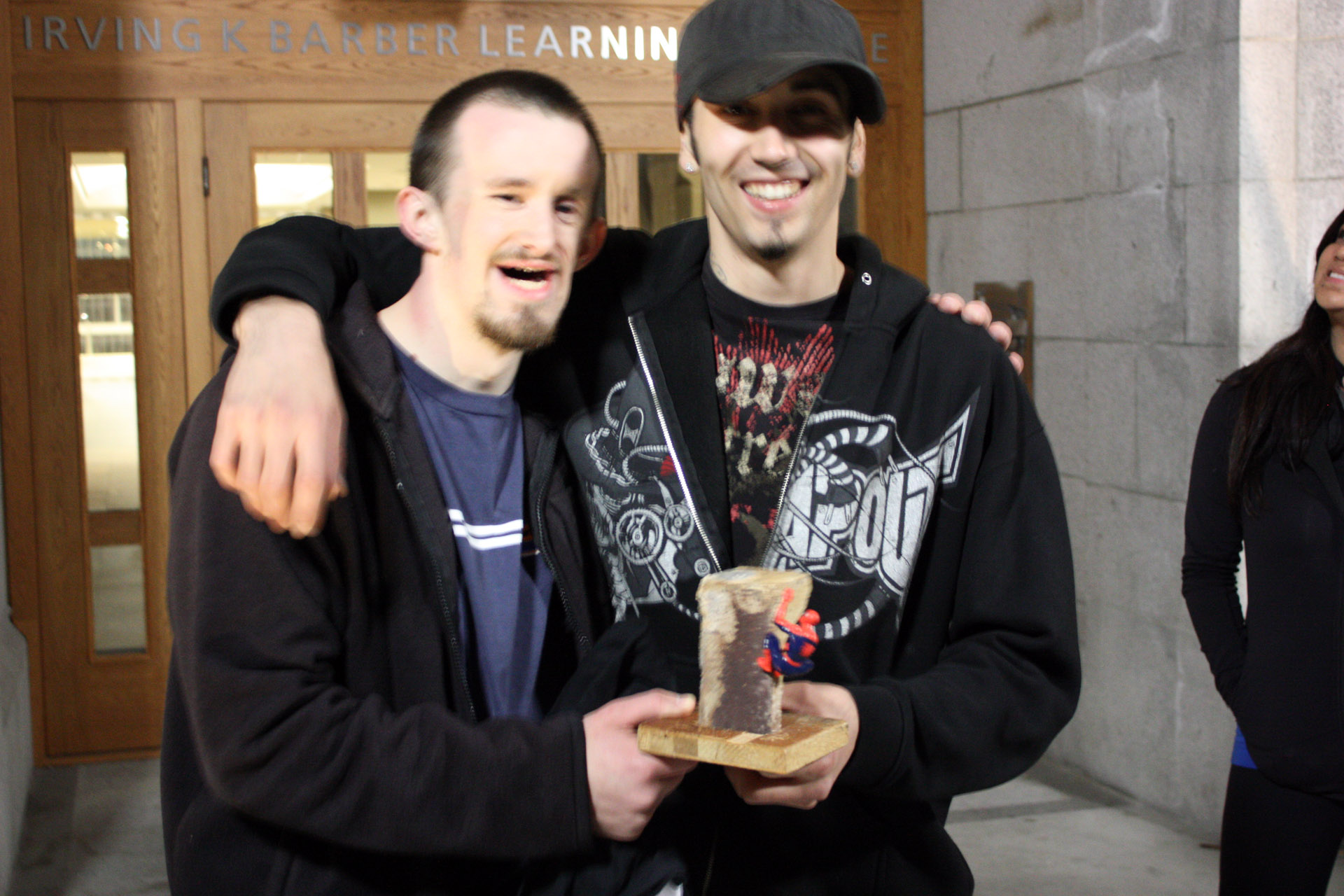