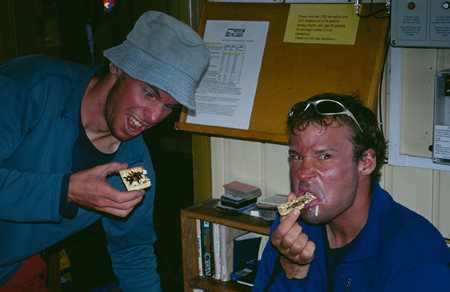 If you’re an engineer, or similar professional, you will suffer a lot if you’re convicted for BUILDERING in canadian courts. With a criminal conviction – you’re not allowed to be a professional! Thus – I’ll turn the circle around – ha – I no longer want to be an engineer!! Lets try it.

Thus – MB. Simul? I was just thinking of a long pipe (like a big bro – but no spring needed), and just for a hang if needed, or rapelling. The weather’s good now. Ardarvin must be a worker – he’s not home during the days.

A few days after receiving this email, Guy and I hooked up to try and simul-climb the MacMillan Bloedel building. It’s a 35 story skyscraper located in the heart of downtown Vancouver with a beautiful chimney going straight up the side. There’s a tale of a climbing-great-of-old soloing it, but Guy insists that he turned back after 7 stories. In any case, it’s an obvious and appealing line to any climber, and ripe for the taking for anyone with the courage to do it.Since the 40″ chimney is too big for the biggest Big Bro, we each made a piece of protection out of a 2×4″. Mine was precisely measured and crafted with a hole in one end to attach 5 mm cord and a ‘biner. Guy’s was cut with a hatchet with cord wrapped around one end which would’ve most likely slid past the midpoint in the event of a fall, countering the camming motion.

I was spooked, maybe looking for an excuse to bail on a rather committing adventure. So we climbed the Radical building instead a pleasant 7 story, well protected romp — memorable, but not near the level of objective as the MacMillan Bloedel building.

Thinking back, now 5 years later, I can’t think of any single event which I regret bailing out on more. In 2003 I was at the height of my climbing abilities. I’ve never been better prepared both physically and mentally than I was then. When Guy died, I lost that opportunity forever.

Regarding the sketchy gear, I now see that Guy constructed it merely as a token gesture for my benefit. There was no thought in his mind that he’d need to rely on it, whereas for me it was a crucial part of the climbing system. By far he was the more talented and confident climber. He was accustomed to soloing and alpine routes, along with all the relative sketchiness that goes with such things. I’m a trad leader at best.

Since that time, I’ve had a few offers to climb the MacBlo building with good friends and equally competent climbers. But these days, as I sit at my office desk now 20 pounds heavier, my most repeated mantra is “sure, when I get back in shape.” I just hope that when I get there I’ve got the courage to go through with it.