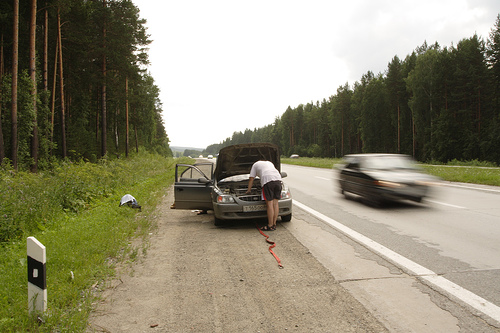 First of all I would like to thank you for such an inspiring website. To see that not all people in North America have gone soft and squishy makes my days a bit more tolerable. Also, having had an interest in climbing/buildering for a number of years now, seeing that there is a loosely affiliated group of people taking part in such endeavors is great.

I live in a town outside of Sacramento, CA and it is full of yuppies and Intel employees (not that there is a huge divide between the two groups). To say the least, it’s quite challenging at times to connect with these people, and that’s assuming one would want to. Also, since they have money they inflate the cost of everything in the area. Specifically climbing gyms. So since I can’t afford to climb a plastic wall with plastic holds, I have begun to explore my community. I got lucky the other night when I was out for a walk and found this huge brick wall that extends well over 100 yards. It’s nothing too difficult and it’s only 15 feet at it’s highest point. It makes for an awesome traverse though, and it’s only around the corner. Yay.

Hopefully I can find some more stuff to climb. In the mean time, keep up the good work. Oh, and the music bar makes my days at work go by quicker. How often do you rotate the tracks out and put new ones in?

Such a nice letter. Its letters like these that make me feel all warm and fuzzy inside, so it’s probably good that I only get one every two years otherwise that hard edge that you’ve grown to know and love would turn into mush. Buildering.net would turn into a motivational, youth-empowering, raising awareness for underprivileged orphans blog. Fucking awful.
I’ve hitchhiked through Sacramento a couple of times. I thought I caught the last ride of my life just outside the city. A crazy Mexican couple picked me up in a beat-up 1980 Chevy Caprice. The minute we got on the highway they started screaming bloody murder at each other. I had no idea what they were saying, my Spanish is rusty at best, but when the guy pulled the car over, jumped out and grabbed a big wrench out of the trunk I thought, “oh great, he’s going to murder his girlfriend, then the witness.” He popped open the hood and started banging on something. All fixed I guess. Everything was peaceful from there on in. I guess they were yelling over whose turn it was to do the fixin’.I couldn’t tell you if they were Intel employees or not, but they definitely weren’t yuppies.

Anyway Sam, because you are able to string words together into coherent thought, I’m putting 12 brand new songs in the music bar.