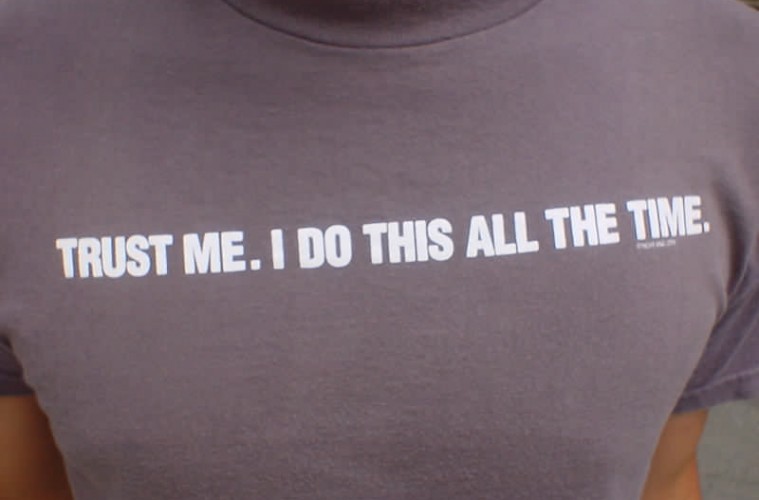 Since I missed this jam (I was in Mexico) the following writeup is courtesy of DanFromVan. Photos by Mr. Stix. 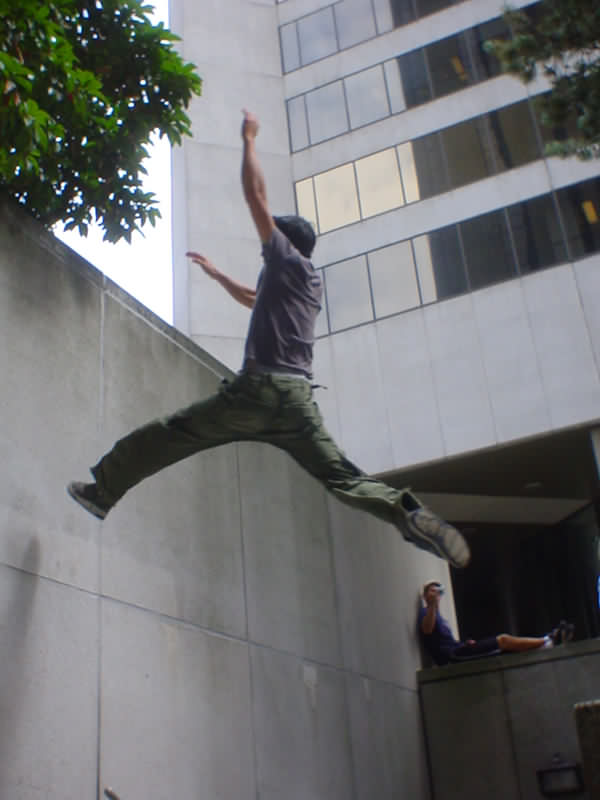 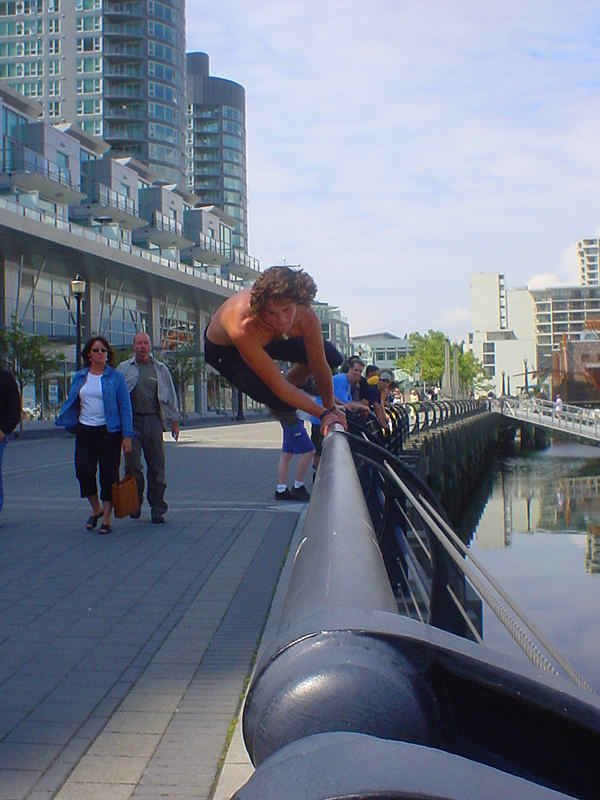 By 11am, there were about 12 traceurs at the North side of the Art Gallery. Kona (fresh back from the UK), CosmicJesta, Clearist, Az, myself, jxl7, memphis and a friend, ragdoll (resplendant in pink), MrStix, Jeffy (back from a collarbone injury), and, well, uh, do you really expect me to remember everyone’s name? Yeah, right. There were quite a few – though not as many as for PKCA4, presumably due to fear of rain. By 11:30, people were warmed up and everyone had show up, and we numbered about 20. A quick roll tutorial later from not-on-forums-dude, henceforth called Nofd since his real name is lost to the annals of time, (and with the gallery being all sessioned out) we decided to move.

First stop was the rafter-to-grass drop, where Clearist bounced like a rubber ball and jxl7 appreciated the impact absorbance of the grass. Nofd looked on, vaguely bemused. Since rentas are always quick to show, we moved along quickly. 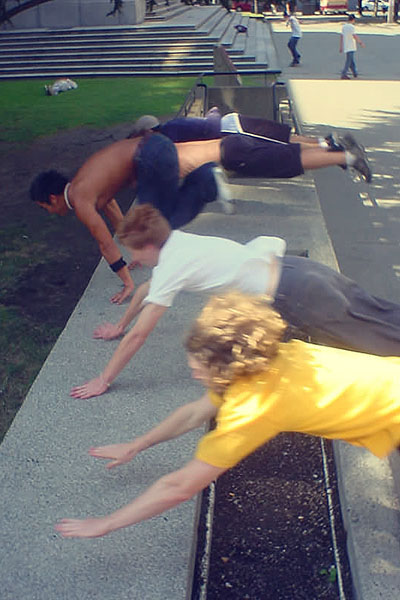 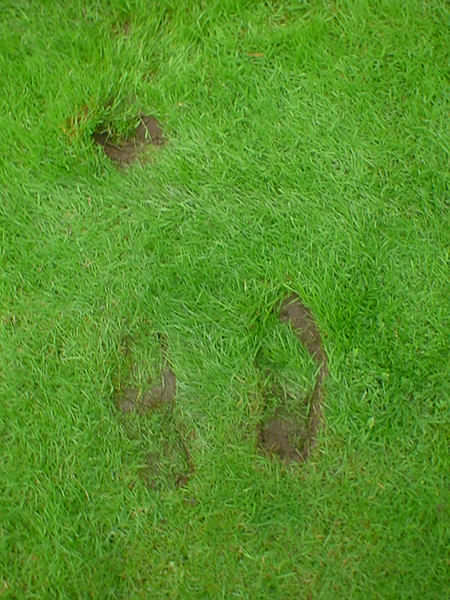 On the way to the black gate, it decided to rain. All of about 5 droplets. To all of you who didn’t come for fear of precipitation: you missed out! Sadly, videotape-dude and some companions got left behind, and mrstix and jxl7 went sideways, and when the black gate was reached we were stuck there waiting for them. It was sessioned quickly – of note was memphis’ smooth speed vault over it – but as usual, we were busted fast. A granite wall with some benches in front of it was hit with reckless abandon, with kongs, dashes, reverses, and a couple of straight clears being hit, until (of course) a parking attendant asked us to move on. Move on we couldn’t… until the stragglers caught up.

A section of bricks and plants drew attention, and while a few people played about on random obstacles, Dane saw a massive precision – about 12 feet across, and 10 feet down, with a 2ft square takeoff and a pretty big drop if he missed it. After a few minutes of psyching himself out, he hit it – and made it! Unfortunately, his ankle didn’t appreciate the landing, and swelled up considerably. His shoe was passed around, and everyone with change tossed some in, until there was enough for a couple of cab rides. He and his friend (girlfriend?) then headed for the hospital… hopefully he’s ok. 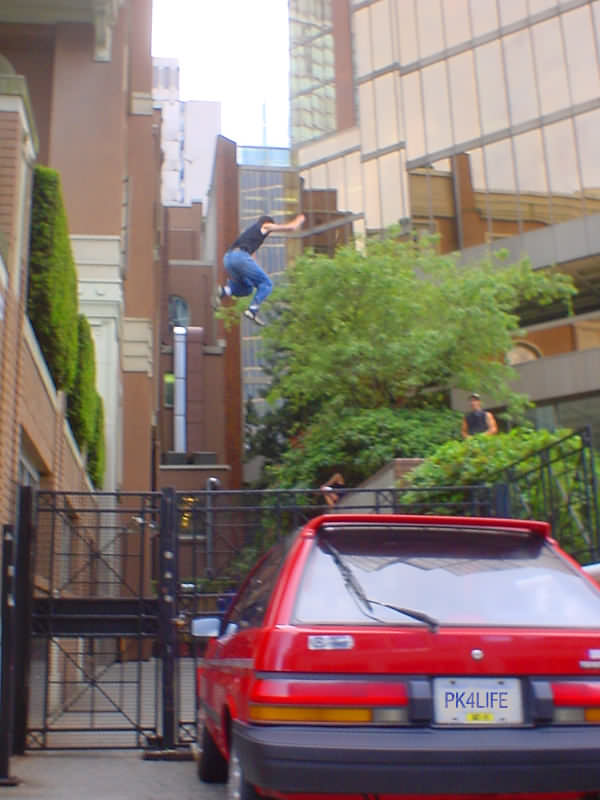 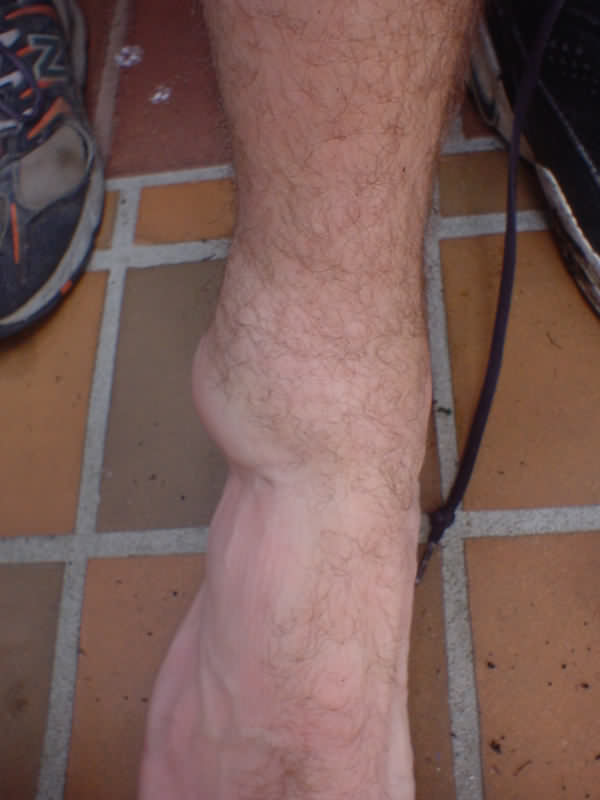 On the way to the beach, random bits of street were being used, which was a nice change from the “see an obstacle, line up, hit it once, wait, repeat” routine. Going up a random pair of fences, some precisions and a huge drop were spotted, and attention was quickly shifted. A few hardy souls attempted precisions with a one-and-a-half story drop as a penalty for overshooting, and a run over a bridgelike crossing was had while cars passed far underneath.

The drop was massive – a story and a half, with planters coming out about a meter and a half at the bottom. Of course Kona decided it was a great idea to kong it… and with about six cameras trained on him, and a few minutes of psyching himself out later, he hit it, and hit it huge. He cleared the planters no problem, landed and rolled, stood up nonchalantly, and impressed the hell out of everyone.

Back on the trek to the waterfront, more sessioning of obstacles on the path, and then we arrived. Flips were cranked out on the hill while vaults were drilled in quick succession off a small drop and precisions and monkeys were hit on the stone bike ramp. Martin and Helen joined us, too.

A while later, feeling the heat, we headed west to a small block that was perfect for drilling vaults. After thoroughly demolishing it, we proceeded up to the HFWTHL, lamentably passing good spot after good spot on the way, with Martin and Helen in particular looking longingly at precisions that were not to be.

At the HFWTHL, which is 7 feet across and about 12 feet up, much pain was endured. memphis stepped up and demolished it, after which jxsl7 showed that his success wasn’t a once-only deal. Cosmicjesta psyched himself out entirely, despite having the physical ability to do it, and then Kona somehow hit it four times in a row. Myself and a few others gave it shots – I even got my hand over it a couple of times – but it would only fall to those select few. People agreed that more gloves were needed next time, a few people left, and we proceeded with the intention to play a little horse/pig/whatever. Yes, like in skateboarding or in basketball. No, not like in the farm.

Back at the art gallery, assisted flips were busted out, alongside a few handstand to roundoffs and assorted vaults. Someone had the bright idea of having a line of people kong the granite slab, so about seven of us hit it together a few times. A few baranis and their ilk were whipped out, to boot.

Some pushing and prodding and nudging later, we went to the library, where things wound down, the game of horse being forgotten. Last I saw, people were holding a sign saying “please give money – liver cancer” and relaxing, with the occasional person standing up to vault a railing.

What happened afterwards? Did our heroes run under the fireworks, or were their heavily-worked legs not up to the task? Will Emily discover that Janet slept with Graham? Does Batman, all tied up, have a chance to escape the Joker’s laughing-gas cloud?

These questions and more will (probably not) be answered at… pkca6! 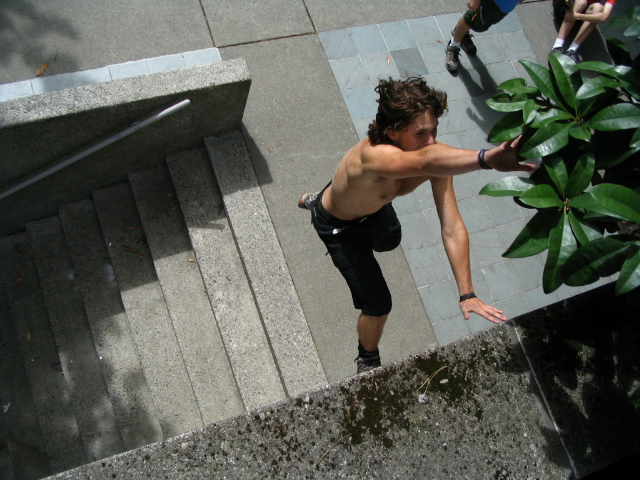 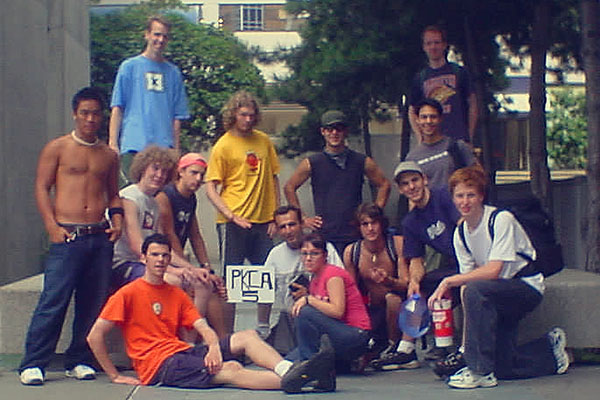