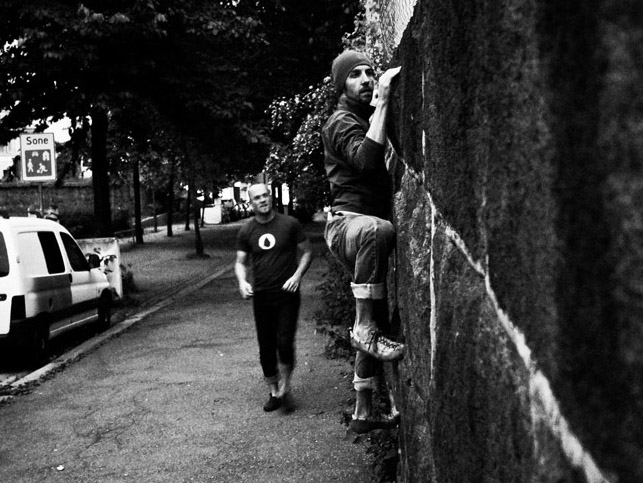 A Tale From Oslo

kiellJune 18, 2013
0 Comments 0
A group of young Norwegian guys stopped in the street to stare at us. The night wind ruffled the branches of the enormous cottonwood at the corner. My husband, Jonathan, had managed to smear his toe into an almost invisible groove. He pressed his cheek to the wall and reached for a chip two feet to his right. I sat cross-legged on the pavement, camera in hand. Our friend, Jeff, stood nearby with his wife Amy, who stretched her fingers, awaiting her turn on the rock.

“What are you doing?” asked one of the Norwegians.

“Just climbing around,” I said.

“Where are you from?”

He nodded, as though this made sense of the oddity: two couples with chalked-up fingers in the middle of urban Oslo at night, puzzling out a traverse along a man-made stone wall. I didn’t bother to clarify that Jonathan and I actually lived only a couple blocks down the street. 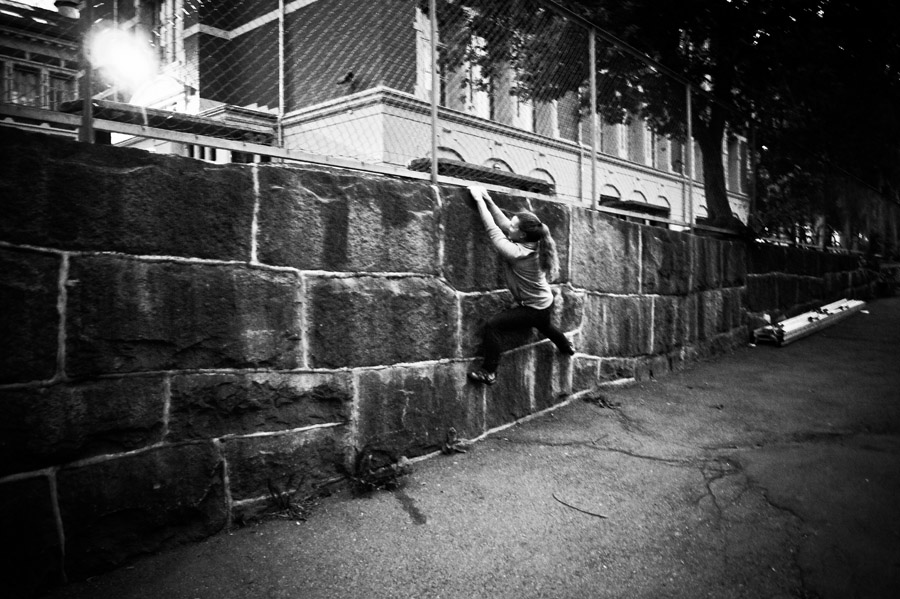 We’d been expats in Norway just over a year, and we passed this wall, running below a French schoolyard, almost every day. But that was all it had been to us—a nondescript, bare wall—until that midsummer’s eve.

When Jonathan and I lived in the San Francisco Bay Area, we visited Yosemite as often as we could snag a campsite, to hike and to climb. But since our move to Norway in 2011, we’d found it difficult to maintain our favorite hobby. Our climbing stuff had begun to gather a more domestic form of dust by the time our first guests arrived in Oslo, a week before the 2012 summer solstice.

We crammed as much sightseeing as we could into those long days: the Folk Museum, the Holmenkollen ski jump. On our last evening with Jeff and Amy, the sun hung in the sky, reluctant to set until well after 10pm. None of us wanted to say goodnight. 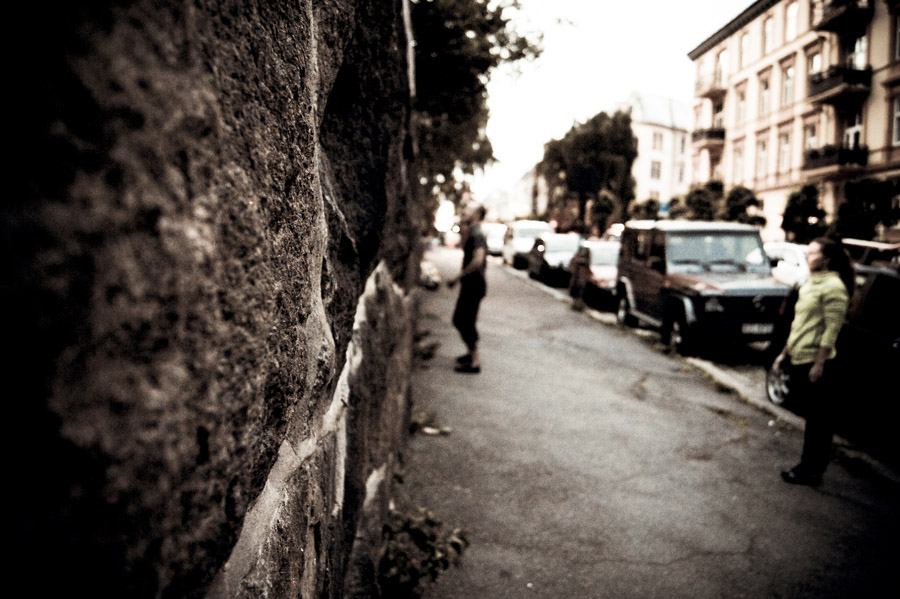 That’s when Jeff reminded us that they’d packed their climbing shoes.

We ran out the door, down the stairs, and ended up at the French school. The schoolyard is raised above the naturally descending streetline. Each stone in the supporting wall is three or four feet long. Between the dark, rough-faced stones run ribbons of white mortar. A bright security light bathed the playground and street in an orange glow. Jonathan stepped up to the wall. Under his strong fingertips, it became something else.

Buildering reveals the nature of a building, the personality of a wall. Over the next half an hour, we uncovered a pattern of crimpy, stretchy holds and moves. 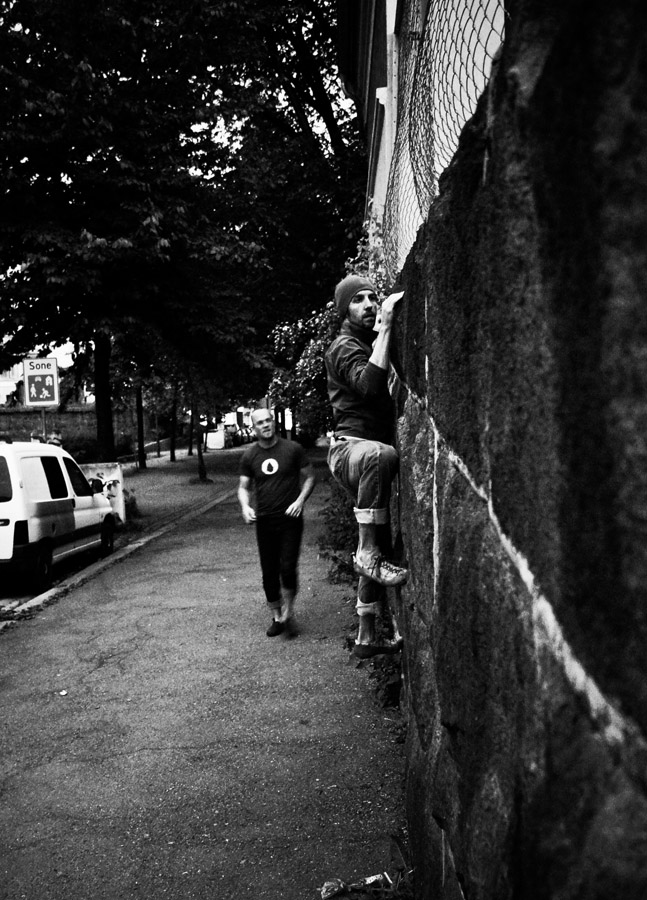 One of the Norwegian guys pulled his iPhone from his pocket and snapped a photo. As the group left, they called back to us, “Rest in peace, California!” (We’re reasonably sure they meant “Take it easy”, but it’s the thought that counts.)

I’ve never seen the schoolyard wall in my neighborhood the same way. Now it holds a secret route, one navigated by fingers and toes, and has been dusted by the chalk echoes of our movements alone. 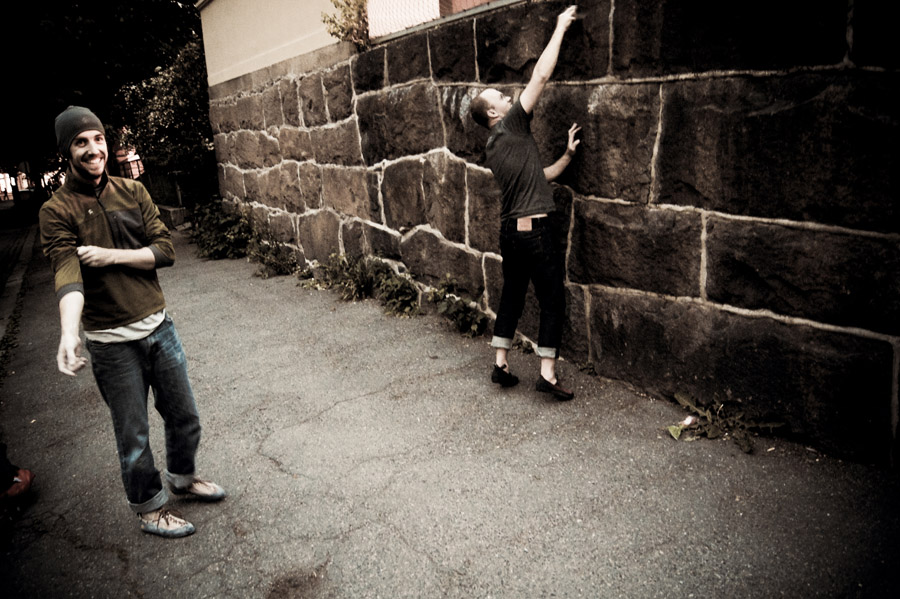 Words and photos by Audrey Camp. Audrey is a writer and American expat living in Oslo, Norway. Her essays have appeared in a number of literary journals including “Between Stone and Air”, published by Forge magazine, where Audrey introduces her friends to multi-pitch climbing. For stories on expat life, marriage, and climbing check out her blog, The Girl Behind the Red Door. Twitter: @audreycamp. Website: audreycamp.com.