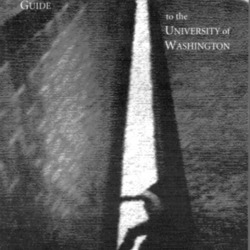 About a month ago I received a letter from a scholarly gentleman named M, who pointed out my incorrect usage of the word “whomever”.M then goes on to comment on the book, “The Urban Adventurer’s Guide to the University of Washington”, by Captain Defecto. M describes it as “primarily bland, plagiarized building descriptions and useless, pixelated photographs”.

The following is Defecto’s response to M’s statement, and if his book is anything like his letter, then it’s a highly enjoyable piece of writing.

i’d like to start off by saying from the bottom of my heart, “fuck you”. it’s whining pussies like you (and it’s obvious you are one because of your nit-picking) that give buildering a bad rap. you and your kind contribute nothing to the activity but inane commentary and ridiculous photos of yourselves gripping for dear life to the sides of a buildings while your toes scrape the ground. but rather than simply tell you that you’re an asshole (something i’m sure you already know) i’d like to address the beef you have with my book. as far as the pictures are concerned, i will agree that they did not come out as i had wished. but this is what happens when pictures are taken with a digital camera at a low setting and then sent over email (now i know). nevertheless, the quality of the pictures is still plenty clear to realize what is going on, and they are certainly not as you say, “worthless”. in regards to the plagarism issue: there is a note in the opening pages that reads, “plagarism timeout” where it specifically states that many of the historical building descriptions where taken from norman johnson’s “the fountain and the mountain.” of all those who have seen and/or purchased the book, there has been nothing but positive feedback (aside, obviously from the pixelation issue). of course when someon displays their artwork publicly there will undoubtedly be hecklers who jump on the chance to talk shit. and alas, this is the role you play. to quote snoop dog, “you ain’t nothin’ but a bitch to me, and ya’ll know the bitches ain’t shit to me.” so, to end “m”, kiss my ass, and if i ever see your bitch-talkin’ self in my stomping grounds, i’ll tie a noose around your neck and drag you down the street off the back of my motorcycle. ya homo.