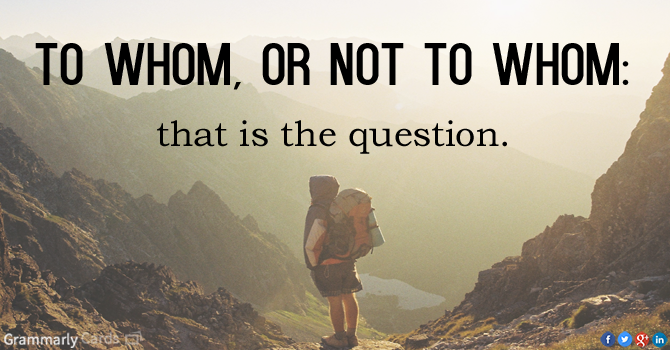 For another example, “Whomever he hit” but “Whoever hit him.”

I thought since you like to make fun of other people’s bad English, you might prefer to be aware of this and remain impervious to counter-attacks.

In other news…Seattle’s Broadway Performance Hall is ripe.

Thanks. Guilty as charged. I think I throw in “whom” because it sounds more sophisticated. My bad.

Re making fun of other people’s bad English, ya you’re right — it’s a dangerous game to play especially when I don’t have a proofreader. I assume you are referring to my harsh review of Alex Hartley’s “LA Climbs”? So be it — I’m just calling a spade a spade. It doesn’t take a good writer to recognize bad writing.

I didn’t mean to criticize your review of the Hartley book at all. Grammar wank that I am, errors like “assent” vs. “ascent” raise my blood pressure and cause me to lose faith in the English speaking world. There’s no denying the egregiousness of the mistakes you picked out. They’re far worse than your minor “whomever” gaff.

On the other hand, I happen to have a copy of both the UW Guide and the Hartley book. Aside from the mistakes in the introduction, you’ve got to admit that Hartley did a pretty fantastic job. The photography is great, the illustrations are great, and the spirit–if not the form–of the writing is also great. By comparison to the UW book, LA Climbs is better still: The UW Guide is primarily bland, plagiarized building descriptions and useless, pixelated photographs.

On the third hand, while reading the Hartley book, I had to ask myself whether the disclaimer in the beginning about it being a work of fiction was more than just a please-don’t-sue-me necessity. It’s very hard to believe that he had time to climb all those routes and still produce such a visually appealing book. For that matter, some of the routes are a bit fanciful. One hundred forty vertical feet of unprotected 5.14 on the face of the headquarters of the United States’ biggest cult seems rather improbable. In contrast, Captain Defecto is very specific about indicating which routes have been climbed and which have not. And given the quality of the publication, it’s evident where the majority of his time goes.

Who can blame him?

Unfortunately I don’t own a copy of Defecto’s UW Guide, so I can’t pass judgment on it. My analysis of his book was based purely on Defecto himself, who is one of the most hardcore and active builderers I know.

Thanks M for your honest reviews.