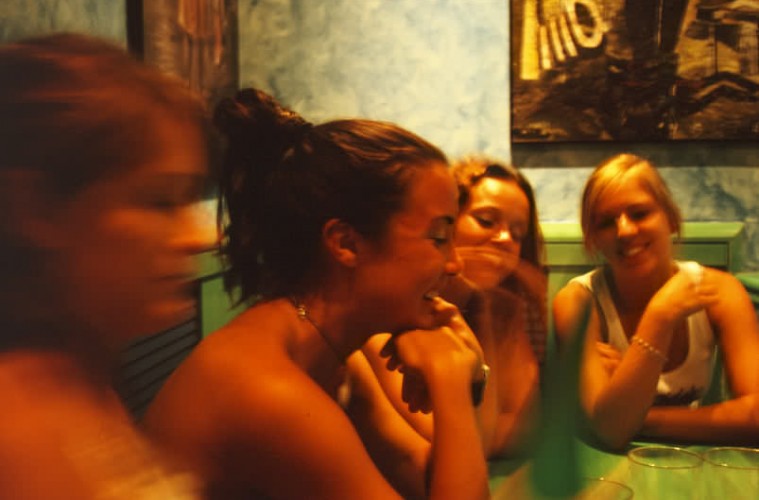 There´s nothing worse than a mass-email from a friend abroad. ¨Mount Treblecacky was beautiful, and then we went to Crampworton where the people wear the funny hats¨. Yawn. I’d rather watch the Lonely Planet documentary. If an email hasn´t caught my interest after 100 words I´m done. 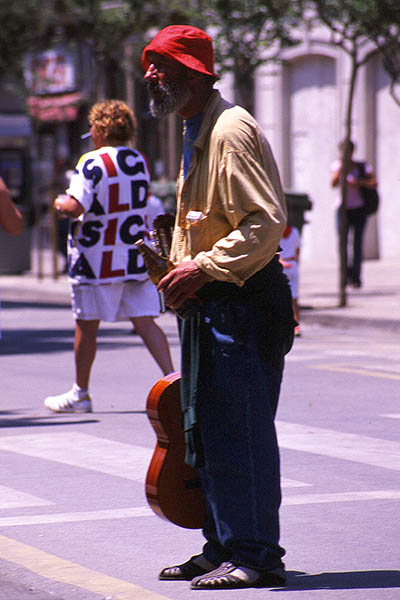 Rhythm, style, a 40 of beer with N.F.A. or the fat dumb fashion victim hoping
to die of lung cancer before the diabetes gets her? Choose your fate wisely. 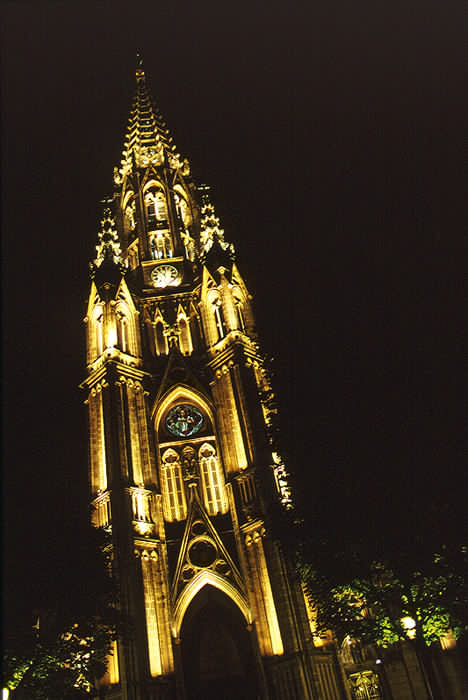 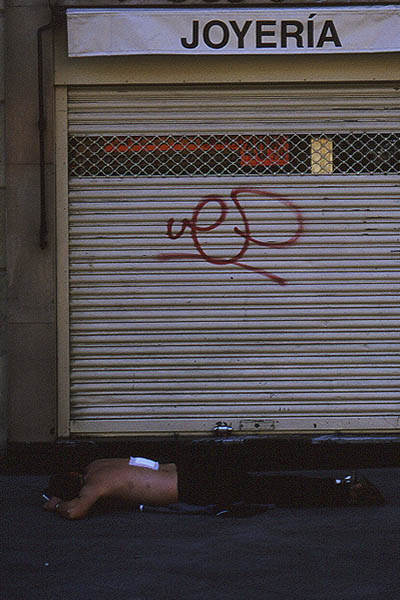 Bums know what’s up. Lay on the street to stay cool, and be first in line when the jewelry store opens. 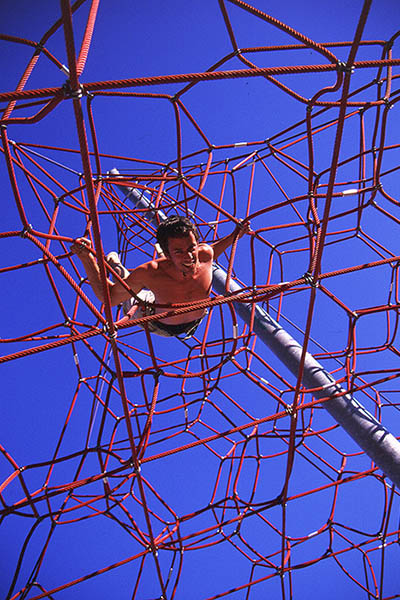 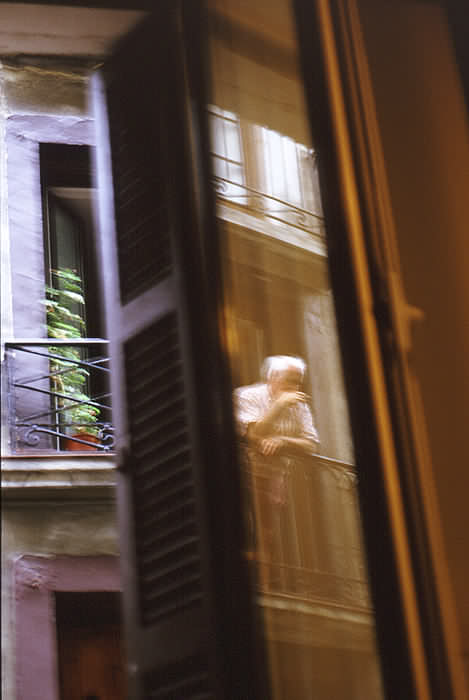 Our hostel window, reflecting the dude next door having a smoke.

Hence the long delay between this post and the last: I’ve been searching for something exciting to catch your interest. Not much can top the events of Pamplona, unless I lose a limb or something. So I traveled to Tibet where there is a large underground market for human limbs. I got $500 for my right arm. I’m left handed…no biggie.

I spent the first $50 on 6 meters of heavy-duty side-weld chain and 3 locks. Never again am I going to let some snot nosed punk run off with my backpack, unless he feels like dragging me with him.

I blew the rest of the money on two bus tickets to San Sebastian. Justine and I needed some time in the sun and surf. More sun than surf, because its awfully hard to swim with one arm.

We stayed in hostels, except for Justine´s last night in town. Her bus left at 5:00am, so instead of wasting money on half a sleep, we slept in a park. I had already picked out a nice 3 storey children´s jungle gym, as the forecast called for rain that night. As a side note, they have the best playgrounds in Spain. Huge slides, big rope-pyramid thingies, climbing walls, these things are really fun! It´s too bad we don´t have these elaborate playgrounds back home, but I can see why. In Spain when little Arturo falls off the 3 storey slide and breaks his neck, the parents say ¨bad Arturo!¨ and leave it at that. In North America we sue.

As a side, side note…guess what? Americans can´t drive in Britain. Insurance agencies refuse to insure them. Brits hear stories about Yanks suing McDonald´s over coffee that´s too hot, or Ronald McDonald statues with leg holes that kids can get their heads stuck in (true story). Americans are too great a legal risk. And they don´t view Canadians much differently. The only way you can insure a car in Britain is to:

(a) become a resident (requires you live there for 12 months).
(b) lie and say you are from New Zealand (what buddy from Alberta did).

OK, back to sleeping in parks. Come evening we headed over to the jungle gym, however two bums were already sleeping there. We let sleeping bums lie, and tried our luck in a nearby bush instead. The bush was quite nice, really it was, until it started raining. So we took our chances in the jungle gym. I locked our packs to us, and us to the slide. Try dragging away a whole jungle gym you little thieving bastards.

At some ridiculous hour of the morning Justine awoke with a yelp. A cracked-out bum was staring at her. I conversed with the man in broken Spanish for some time, trying to get him to leave. The whole time he eyed our packs and fondled the 6 meters of heavy-duty side-weld chain. ¨My precious, we must haves it.” He offered Justine a discarded cigarette butt (the preferred currency of bums), which she diplomatically accepted.

TIP #1 in BUM RELATIONS: If a bum offers you something, take it. It greatly pleases them to be on the other side of the give-take relationship.

A couple hours later Gollum returned, tugging on my sneakers which were conveniently chained to my sleeping bag. He smiled and waved. We smiled and left.

We tried to get a bit of sleep at the bus station, but as you know, all bus station benches are designed to prevent sleeping. All and all this added up to my WORST SLEEP EVER. You know it´s bad when you wish you would’ve gotten drunk and stayed up all night.

After dropping off Justine, to make up for my lost traveling companion I befriended a nice bum named Noureddine. Noureddine is originally from Morocco, but has been hiding out in Spain for the last 10 years because of some crazy shit that he pulled there. He wouldn’t tell me what.

TIP #2 in BUM RELATIONS: Buy a bum alcohol. He will love you forever.

One day, after Noureddine and I had gotten quite inebriated, we decided to jump off a 40 ft bridge. I wasn’t sure if Noureddine could swim, but he was chomping at the bit to jump so I let him go first. What followed will forever be etched in my memory. I wish I could project my thoughts onto a screen for you all to see, but words will have to do.

I’m not sure what you’d call his diving style. Imagine someone reclining in a Laz-y-Boy recliner. Now take away the Laz-y-Boy. The whole time he was in the air his eyes were locked on mine, a toothless grin of sheer delight on his face. Call it love. As you can imagine he hit the water rather hard.

Next to be answered was whether Noureddine could swim. I wouldn´t call his movements swimming as much as slapping the water frantically. ´Frantically´ is the only word I can think of here. We used to have a pet toy poodle that hated the water. We’d torture him by holding him just above the tub. Before his feet hit the water, he’d start frantically paddling his legs. That’s the ‘frantically’ I’m thinking of here.

Noureddine did manage to get to shore, which was a good thing since I´m not the strongest of swimmers. I failed my Maroon swimming level, which is the level just after getting your face wet and opening your eyes under water.

So that was Noureddine. I invited him to come stay with me in Vancouver, but he can´t because of his criminal record.

After Noureddine I hooked up with four slightly more attractive traveling partners. No offense Noureddine, but I’m going to have to go with the four beautiful girls on the beach. Did I mention they were topless? Anyway, turns out the girls were vacationing from Vancouver of all places.

I hung up my park sleeping and bum fraternizing ways for a few days and partook in some more civilized activities with the girls. You know, eating at restaurants, shopping, and whatnot. As fun as hanging around with beautiful girls is, after a few days I was getting restless and broke, so I hitched a ride to Barcelona too see what it had to offer. 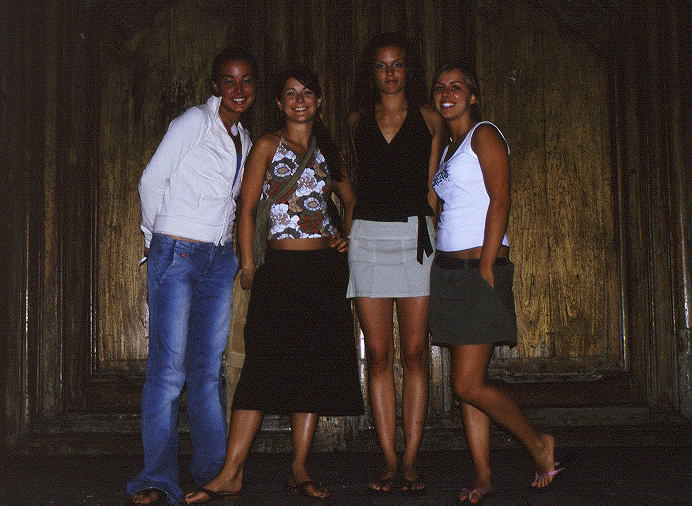 Travel the world to meet cute girls from your hometown.