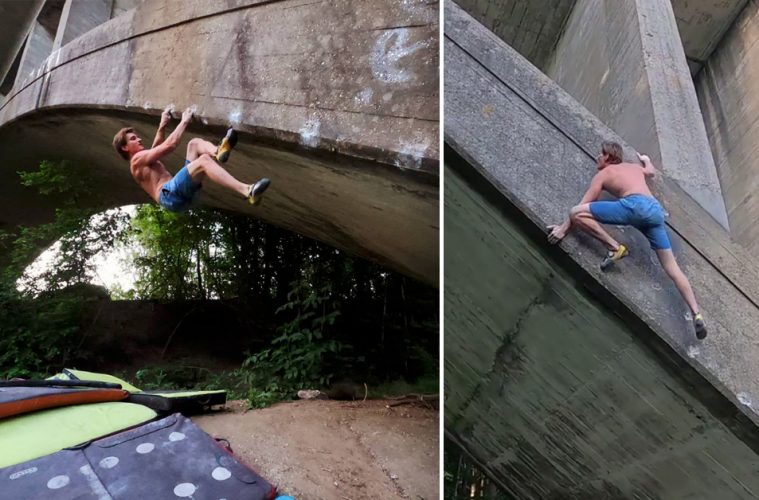 Check Out this Immense V10 Bridge Problem in Belgium

Browsing Instagram the other day I stumbled upon this huge V10 bridge climb put up by a wad I photographed at a competition in Belgium earlier this year.

Bruno de Meyer has named his problem Anoroc, giving it V10 (Font 7C), a grade that was confirmed after the second ascent by Koen Baekelandt. This makes it probably one of the hardest buildering problems we’ve encountered so far.

The 70-year-old bridge makes for a peaceful venue if you don’t mind the traffic noise — located in a forest, there’s some half-decent graffiti but the spot is refreshingly free of human faeces and needles. If you fancy going to give it a go, track it down by clicking here.

There’s a few slightly friendlier problems 50 metres to the left, coming in at around V4/5 and V7/8, one of which is in the second half of Bruno’s video.

I discovered this concrete bridge close to my home a few years ago and found out there were some nice climbable lines on it. Yesterday I was able to climb this excellent line. You can top out the route behind a big pillar, after doing about 20 moves. Estimated the grade around 7c FB. – – – Will be posting the video soon. 🙂 📷 @wandertvdp – – – #climbing #bouldering #urbanclimbing #urbanphotography #buildering #climbingislife #rockclimbing #nature #climber #boulder #climbinglife #klettern #outdoors #escalada #photography #outdoor #training #climbingismypassion #urbanexplorer