Growing up in Warsaw in the early ’90s, with the recent collapse of the socialist government and the country in economic ruin, meant there were some luxuries we didn’t have access to. Things like meat, sugar, semi-decent booze, toilet paper, and of course climbing walls. Just as we managed to find alternatives to toilet paper, we found other ways to train in the city.

The concrete pre World War I bunkers, the pillars holding up one of the bridges, and the walls lining one of the most important transportation arteries all delivered the climbing features we sought. Even after the capitalist transformation and the advent of modern rock gyms, Warsaw climbers often chose to train at these urban crags.

Just a decade ago my humble self traversed the walls of Ołowianka which roughly translates as “the leaded one” due to the amount of exhaust fumes inhaled while climbing.

I’d like to believe some hardcore old-timers still enjoy pulling on the crumbly facades of Warsaw bridges, but when I recently visited my friend and a pro climber Aleksandra ‘Ola’ Taistra and suggested we go buildering, she raised her eyebrows in a mixture of disbelief and disdain.

‘How about Andy snaps some pictures?’ I asked, knowing this will be a good bait. ‘Only if I can take Jason,’ Alexsandra’s dedicated spotted spotter. And with that, we set off into the gloomy Warsaw morning. 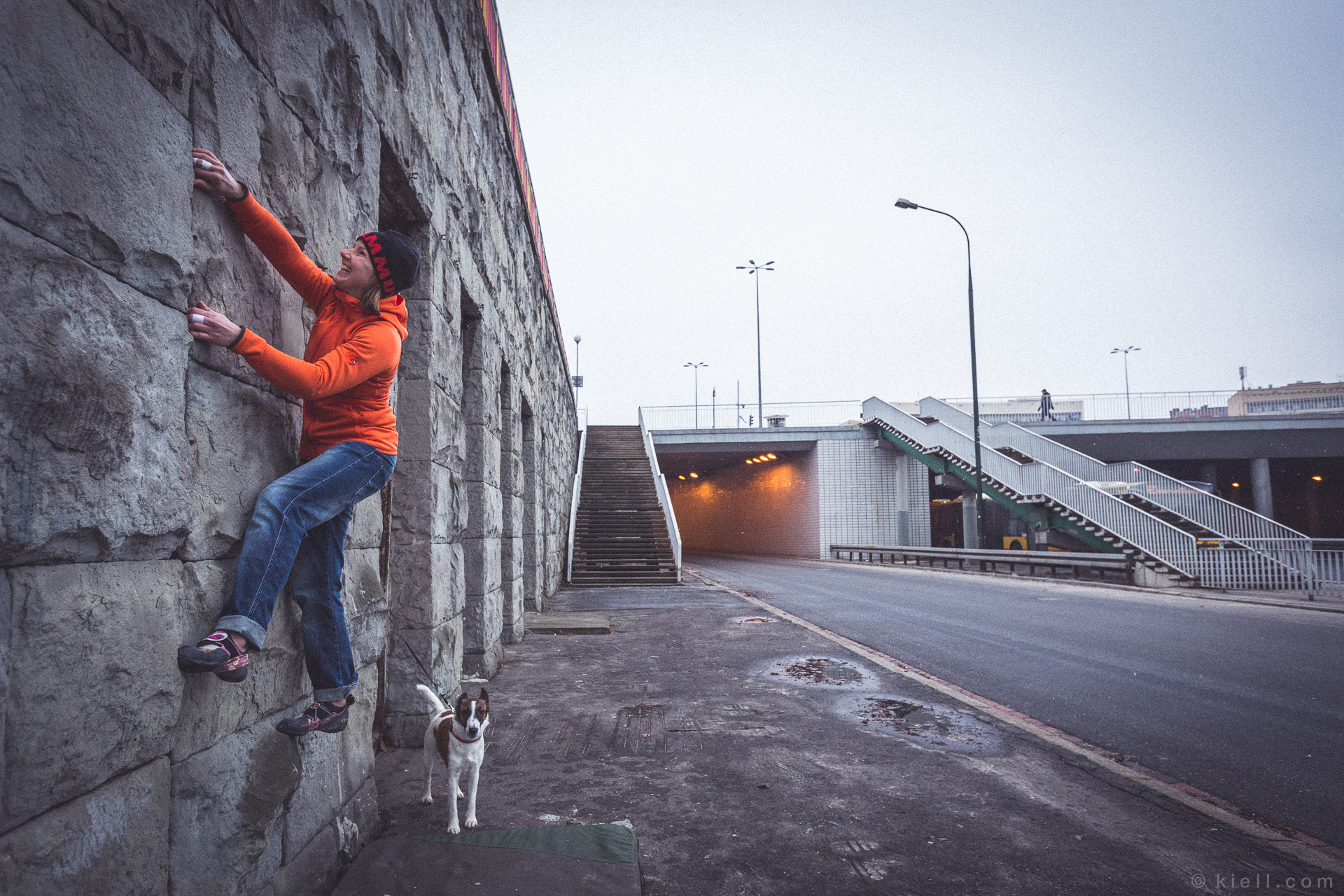 Lining the sides of one of the busiest transportation links in Warsaw is Ołowianka. Here you can see Ola’s expert climbing and Jason’s dilettante spotting in a rare moment without cars rushing past. 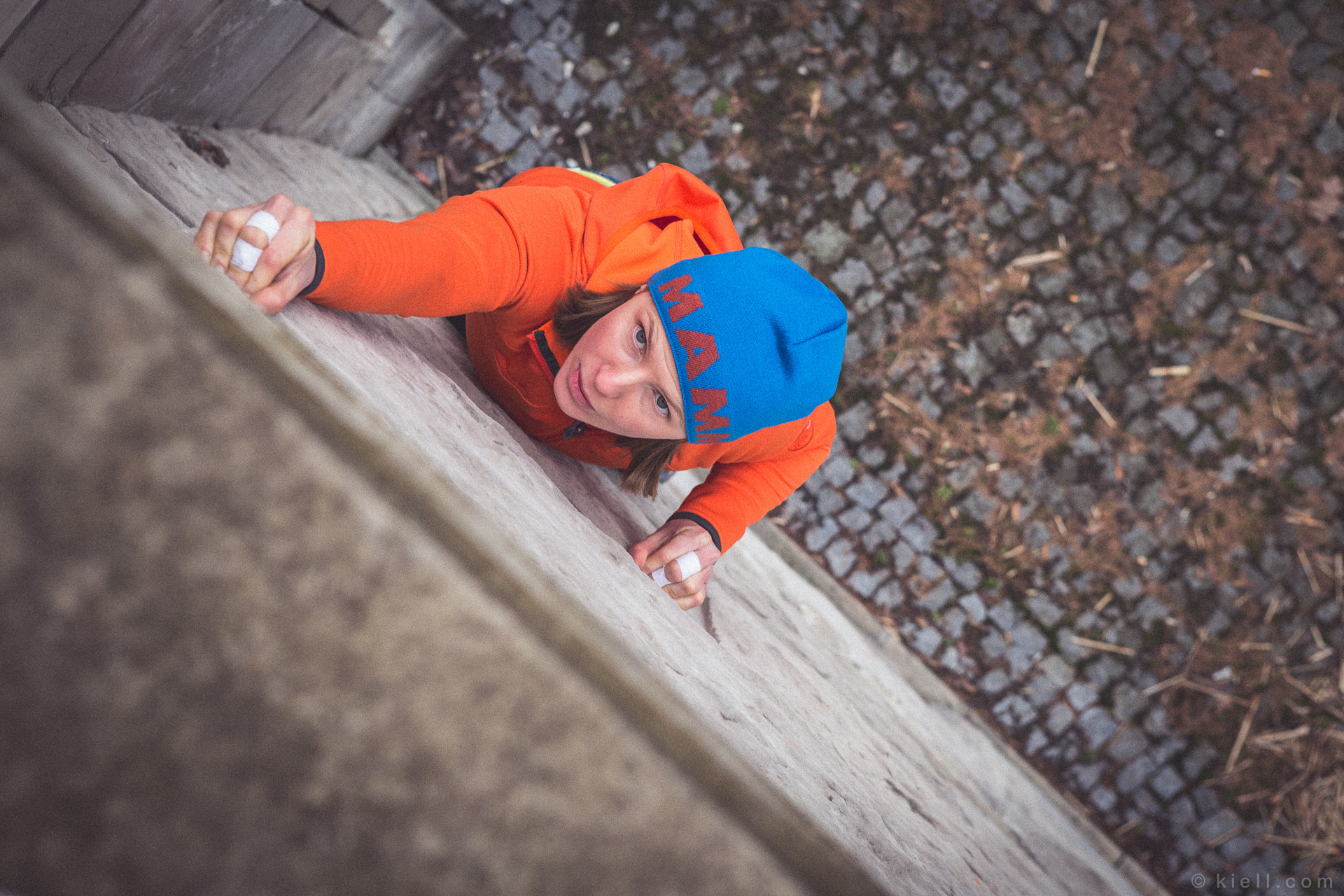 Having explored the iconic venues, we moved on to find something unleaded, with potential for good climbing. A park located on the gentle slopes leading to Vistula River had just what we needed. 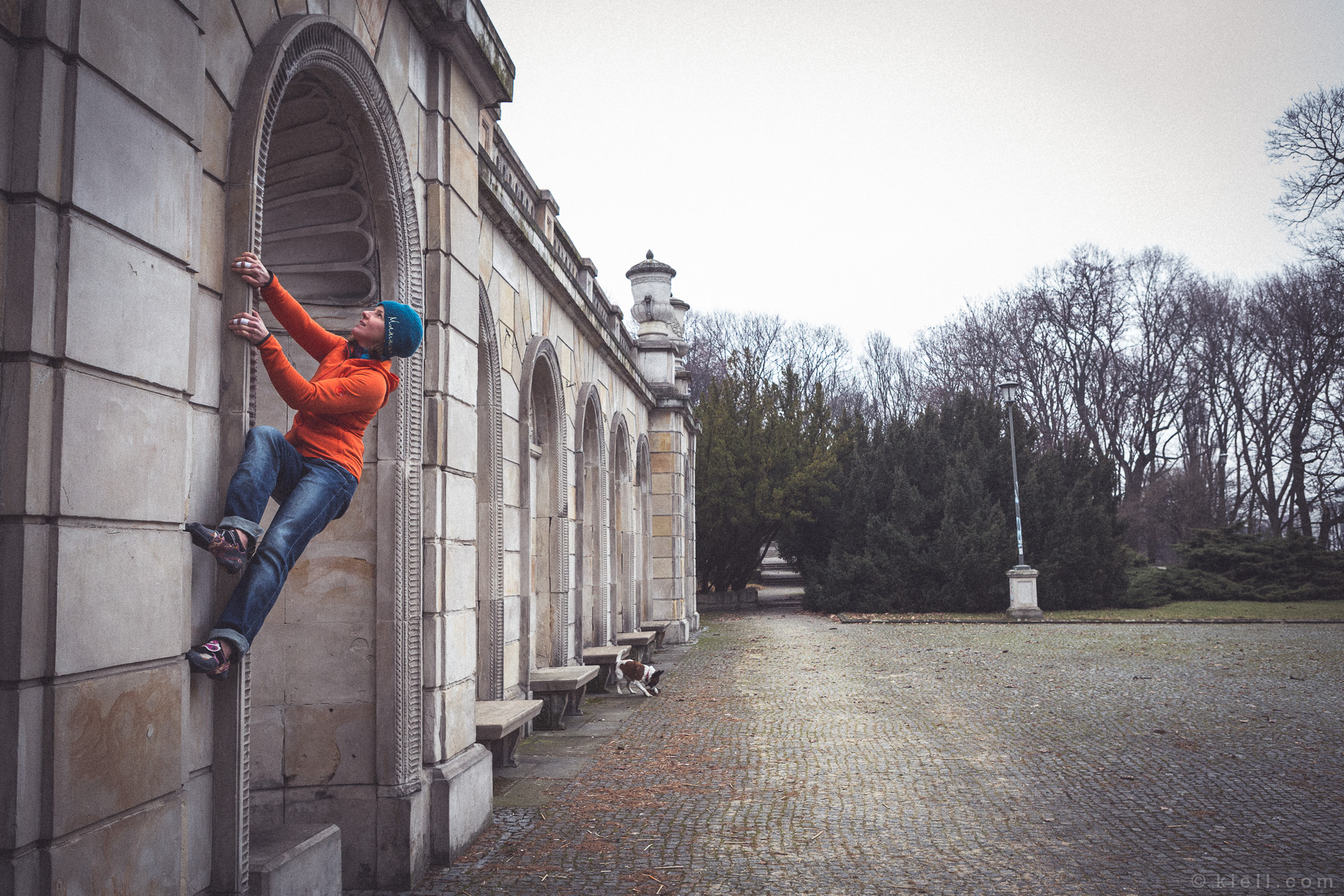 The 19th century buildings looked and climbed great. After posting the above picture on Facebook, we were warned that the conservation officers might soon be after us. In retrospect, I think are right. 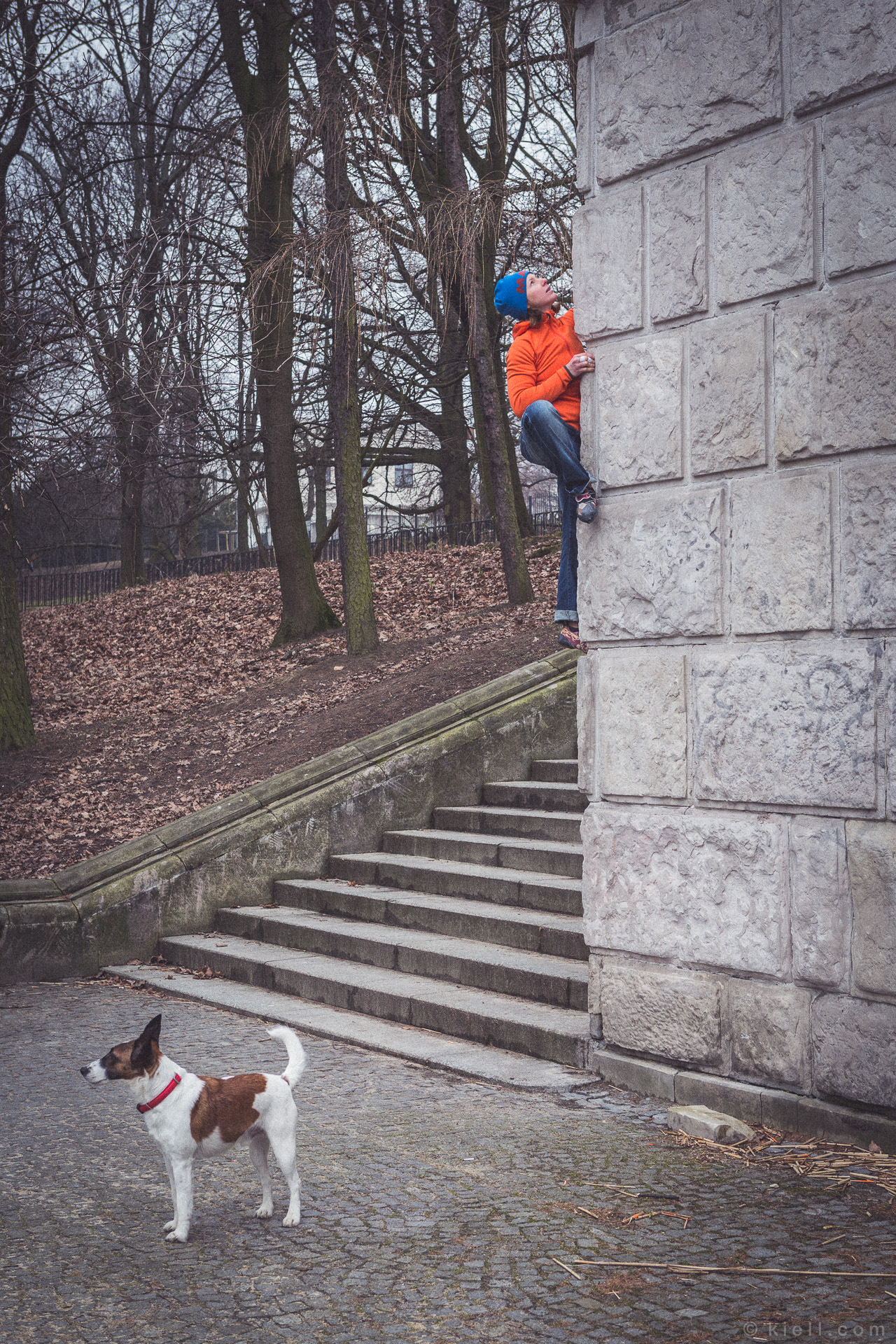 The stairs arête was a gentle climb and Jason didn’t care for it. I loved it. Ola was unimpressed by the dusty holds. 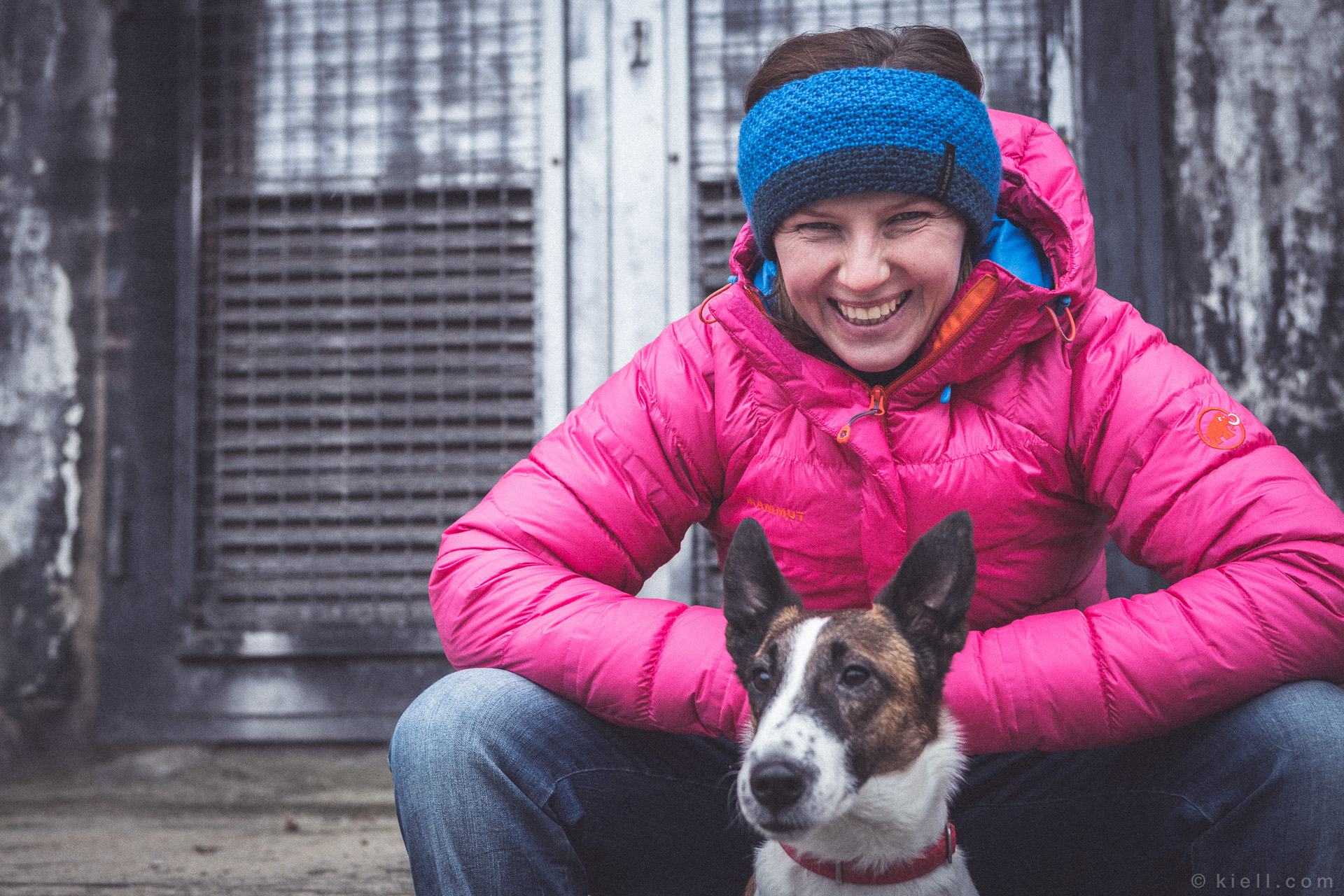 I’ll have you know that Ola Taistra is a serious climbing coach and a professional sport climber sponsored by serious brands. She initially thought she wouldn’t like buildering, and she’s still not sure.

Jason is a fox terrier. He likes to bite people’s feet as they jog past him. He’s very sure about it.

Aleksandra ‘Ola’ Taistra is supported by La Sportiva and Mammut.

Andy Day is one of the editors here a buildering.net. He is also a photographer/climber/geek/hobo.