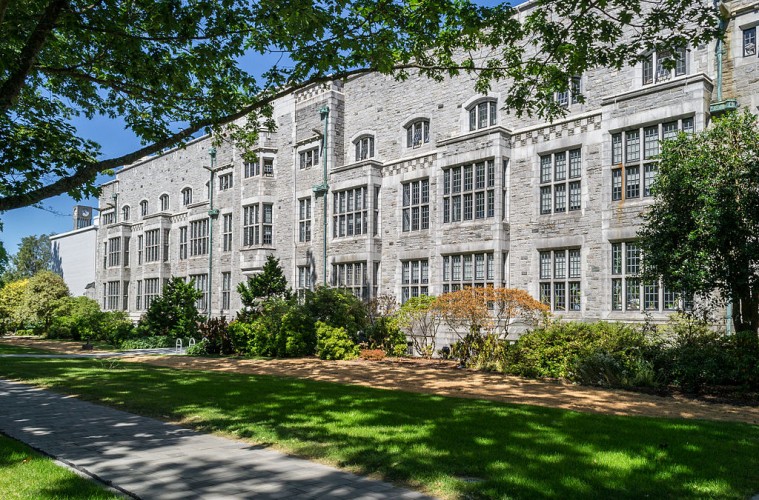 With working on the UBC guidebook and the weekly outings, there’s been a lot of buildering happening on campus. Here’s a video from a couple weeks ago. Sorry for the crappy quality, it was filmed on an iPod Nano basically in the complete dark.

Of particular note is a route that Grant sent, Chemistry Drainpipe, which is originally described in the new guidebook as:

Chemistry Drainpipe
For legitimacy sake I’ve either climbed, or in the case where technical difficulty exceeds my crap climbing skills (see Belkin North Drainage), witnessed the ascent of every route in this guide.

This route is the exception.

Chemistry is the oldest permanent structure on campus. “The Barn” coffee shop is older, but was never intended to be a permanent structure and has been heavily renovated. That drainpipe was attached in 1925 and hasn’t been refurbished since. I’ll let you come to your own conclusion on how sturdy it is.

It’s pretty much a solo until the spout. You could probably slip a sling behind the drain-pipe, but should you really be testing a pipe to hold a fall when it’s questionable whether it would hold body weight?

Congrats to Grant who sent it in style. Turns out the 1968 description of “fairly firm” still holds true. Now that there’s no fire escape on Chemistry this is the easiest access to the roof. Since we were up there we had to take the opportunity to climb Chemistry Cracks, which subsequently kicked our asses.

Email me if you’d like to come out as see what it’s all about.