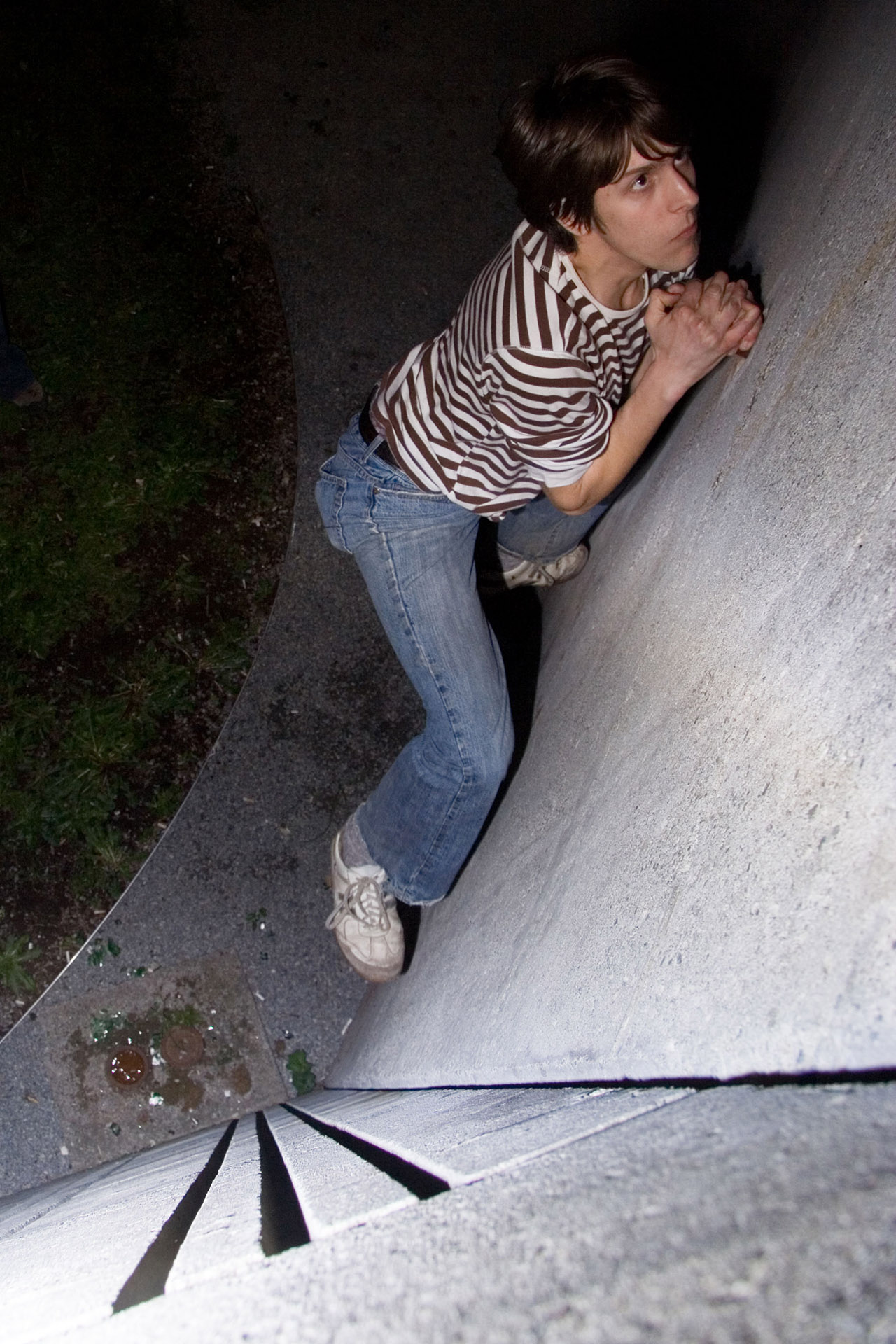 “Here’s the rules:
1. Add an extra 10% to your score for gum rubber soles.
2. Besides the Chan Centre, stay off rooftops to avoid unnecessary attention.
3. If security arrives, decide as a group whether or not to run. Crossing your legs means you DON’T want to run, so pay attention ’cause if you are just standing there cluelessly, the others will assume you want to run.
4. Security has dogs, but don’t let that deter you from running. They’re just pets and not trained to attack.
5. If RCMP arrives, don’t run and be very friendly.
6. Have fun.”

Fortunately there were no dogs this year, only security guards in white cars trying to look authoritative to a large group of builderers. However, this time we wouldn’t be duped into sticking around to wait for the cops.

In total, thirty-one pioneering spirits attended this year’s competition, making it the best turnout yet. We decided to break into two smaller groups to allow for more climbing time for everyone and to cut down on our conspicuousness. 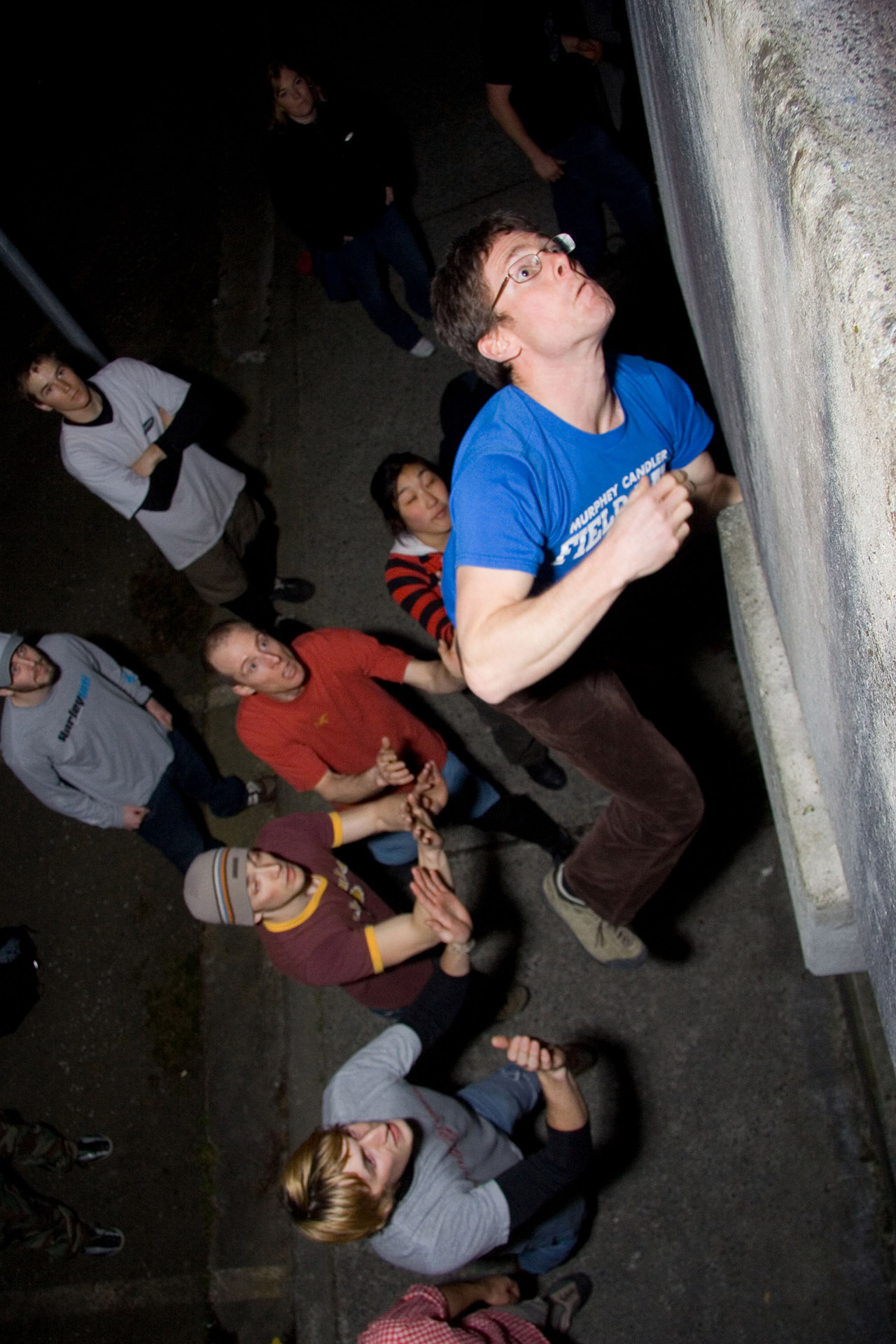 Kenny gets all the cool photos. North Parkade Dyno.

Boris the Sneaky Fucking Russian led one group and I led the other. Unfortunately I can’t offer much insight on Boris’ group’s activities, but apparently they had a blast and climbed without any confrontations.

The problems were harder this year, since too many people were sending all the problems last year; however, after watching only one or two people get up the “moderate” Gage Pipe problem, I feared I had made a mistake. 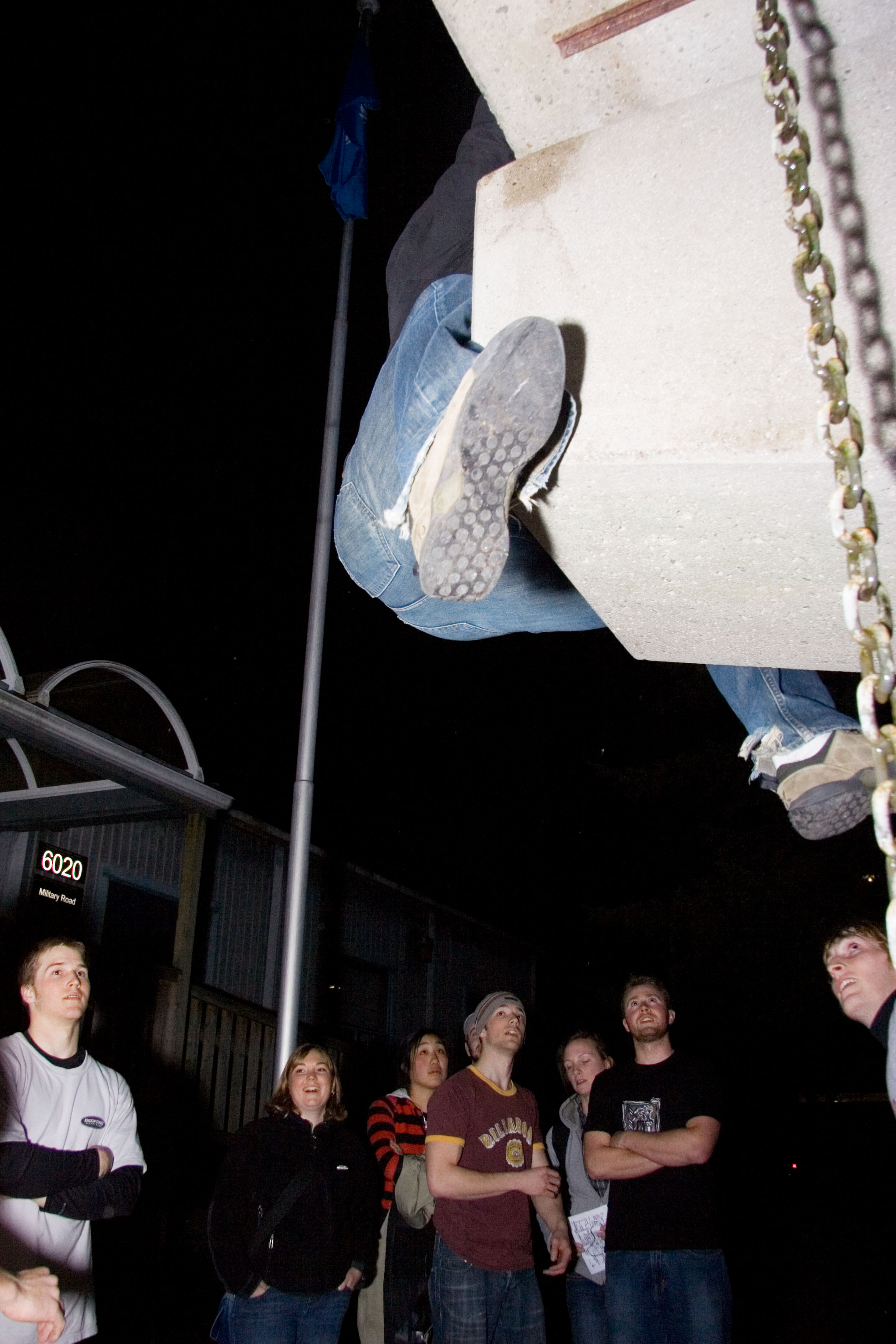 Thankfully, by the time we hit the Law Building, most everyone was warmed up and sending.

Kris Holm, the famous unicyclist, dropped by for a bit and sent some of the harder problems, including the North Parkade Dyno. Not bad for somebody who doesn’t climb. 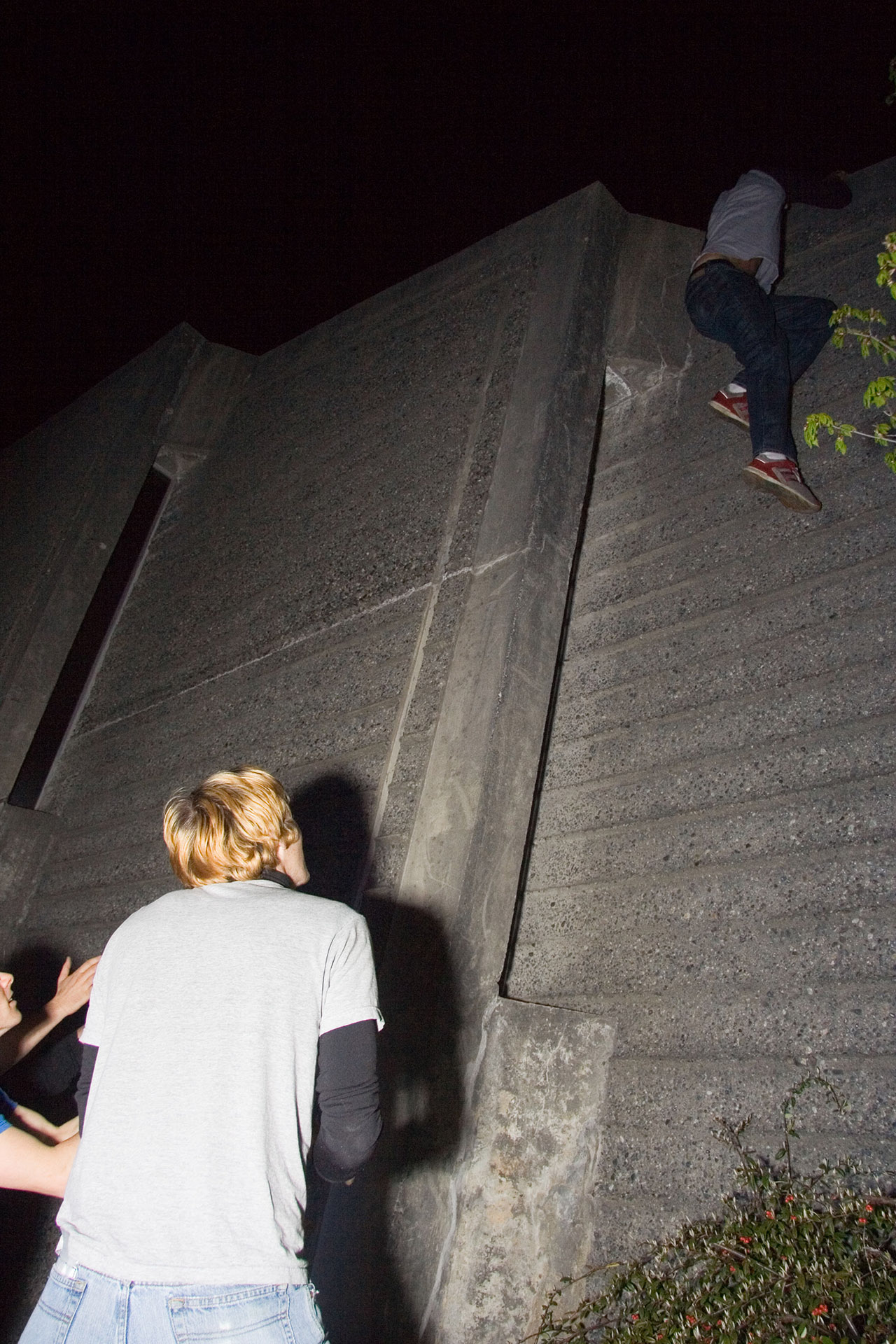 Other famous personalities joined our group, including buildering.net superstars Kenny Frazz, and Allen “The Thinking Man’s Alain” Roberts — both very strong climbers. I suspected one of them would be taking home the coveted trophy.

The Chan Centre was a new addition to the buildering circuit, a nice wide crack with perfect foot and hand jams. It allows access to one of the Chan sub-roofs, not the tin can proper but still a nice vantage point. A janitor stopped by at one point to comment on what a great job we were doing — not really, but he promised not to call the cops if we left immediately.

The highlight of the evening had to be Allen’s amazing ascent of the Belkin Art Gallery North Drainage problem. Think of climbing a triangle suspended off the ground by about 4ft. The sides of the triangle lack any sort of features, and don’t come together at a sharp enough angle to make much difference. To make things worse, the edges end about halfway up.

Lacking footholds, the initial pull-up requires an impressive amount of shoulder strength. Once your feet are on, you squeeze your legs together as hard as you can and try to bump up your hands. At this point it’s anyone’s guess what to do. A weird gaston ? A lieback? A head-jam perhaps?

Eventually Allen nailed the problem by getting his legs as high as he could on the sides, and reaching way up to the finishing jug. And by jug I mean a little metal edge covered in water.

With this historic first ascent, Allen secured 1st place in the competition, being the only person to successfully climb every problem.

The last problem of the evening was the South Drainage of Belkin, which notably is the only route on campus with a proper bolt and hanger for protection (don’t ask me…it’s just there). After giving a demo of the route, I was greeted by hysterical security lady (a Campus Cowgirl?) yelling, “GET DOWN FROM THERE RIGHT NOW! THE RCMP ARE ON THEIR WAY,” an order I couldn’t have complied with more promptly.

With one quick descent and brisk jog (“STOP, COME BACK HERE!”), we all found ourselves at the Pit Pub, dishing out the evening’s prizes over pitchers of beer.

Thanks to Oker for providing the photos. Be sure to check out Boris and Fuller’s photos as well.
Thanks to Jon for the RedBull and T-Shirts.
Thanks to everyone who came out and made the evening special.
Lastly, thanks to all the unimaginative authority figures who infuse our craft with sweet, sweet nectar. 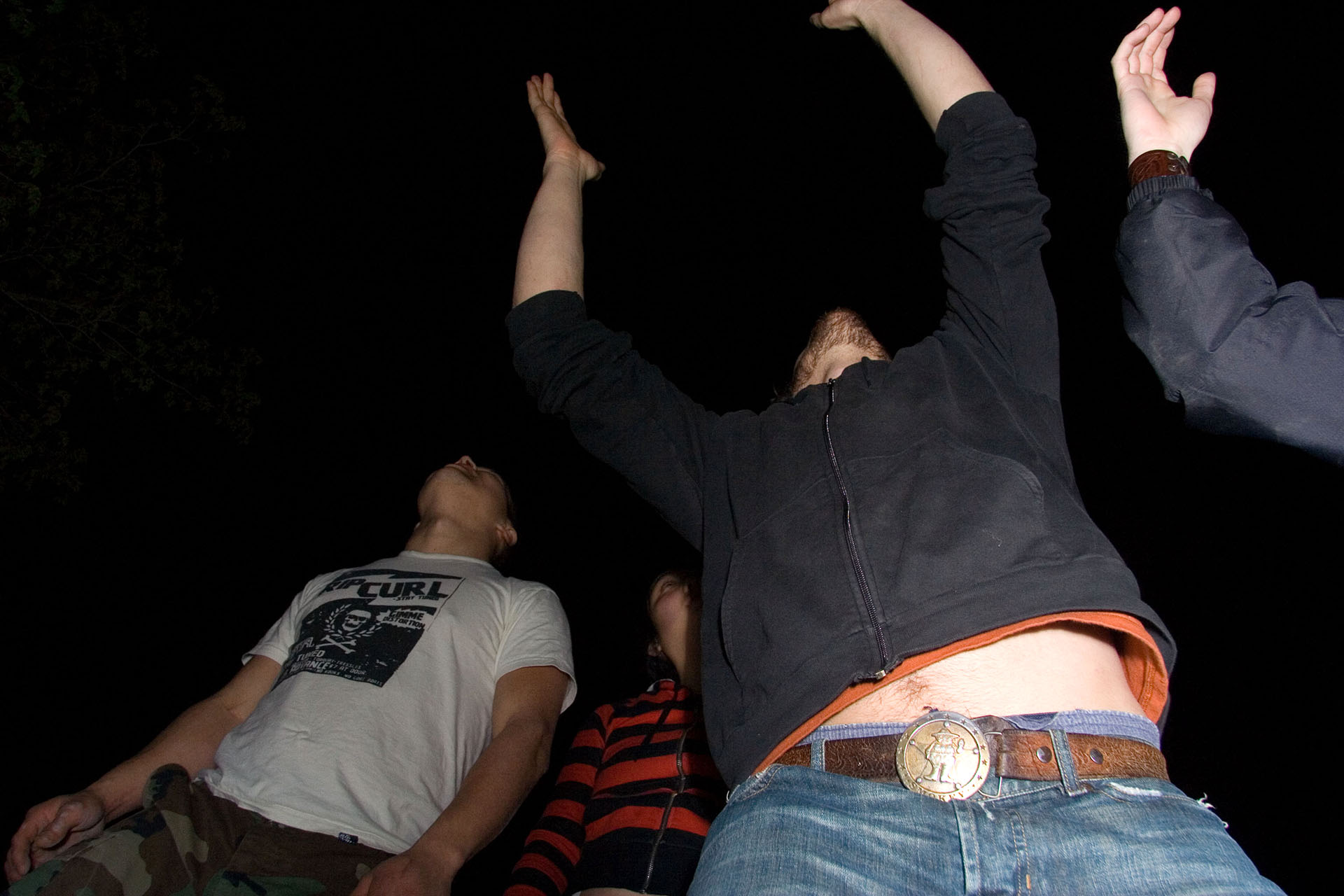 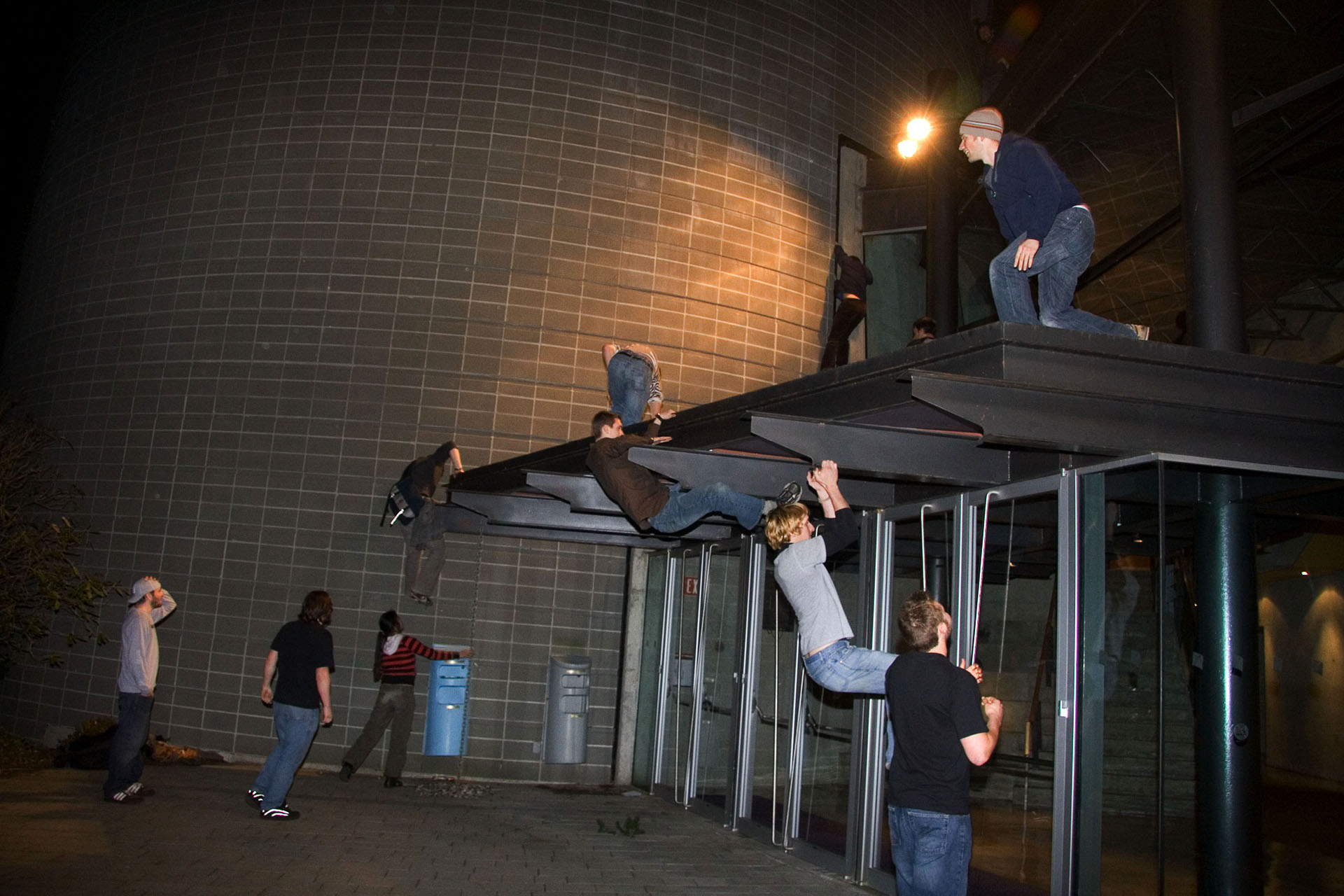 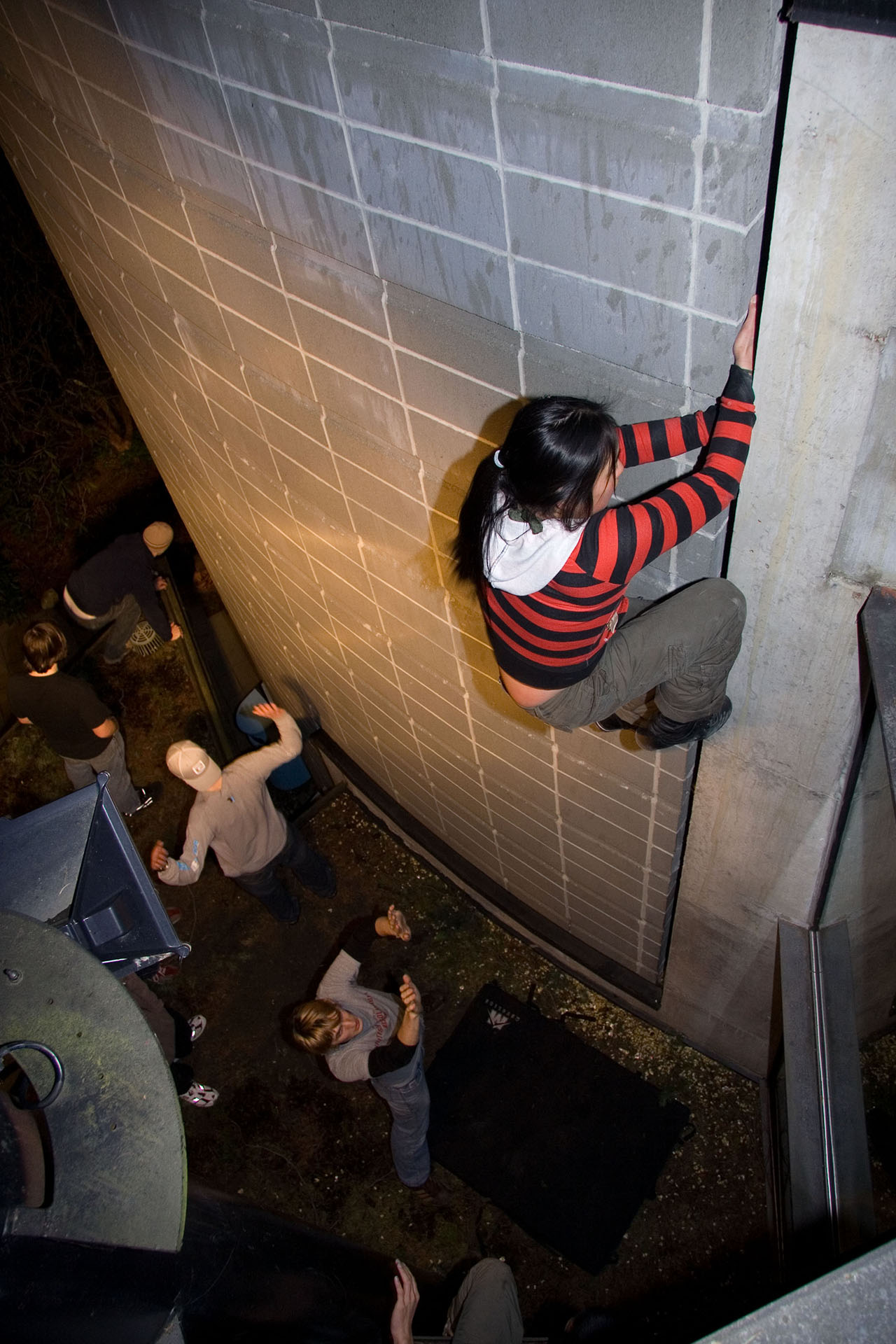 Chicks know how to dress for the camera. Tiffany on Chan Centre. 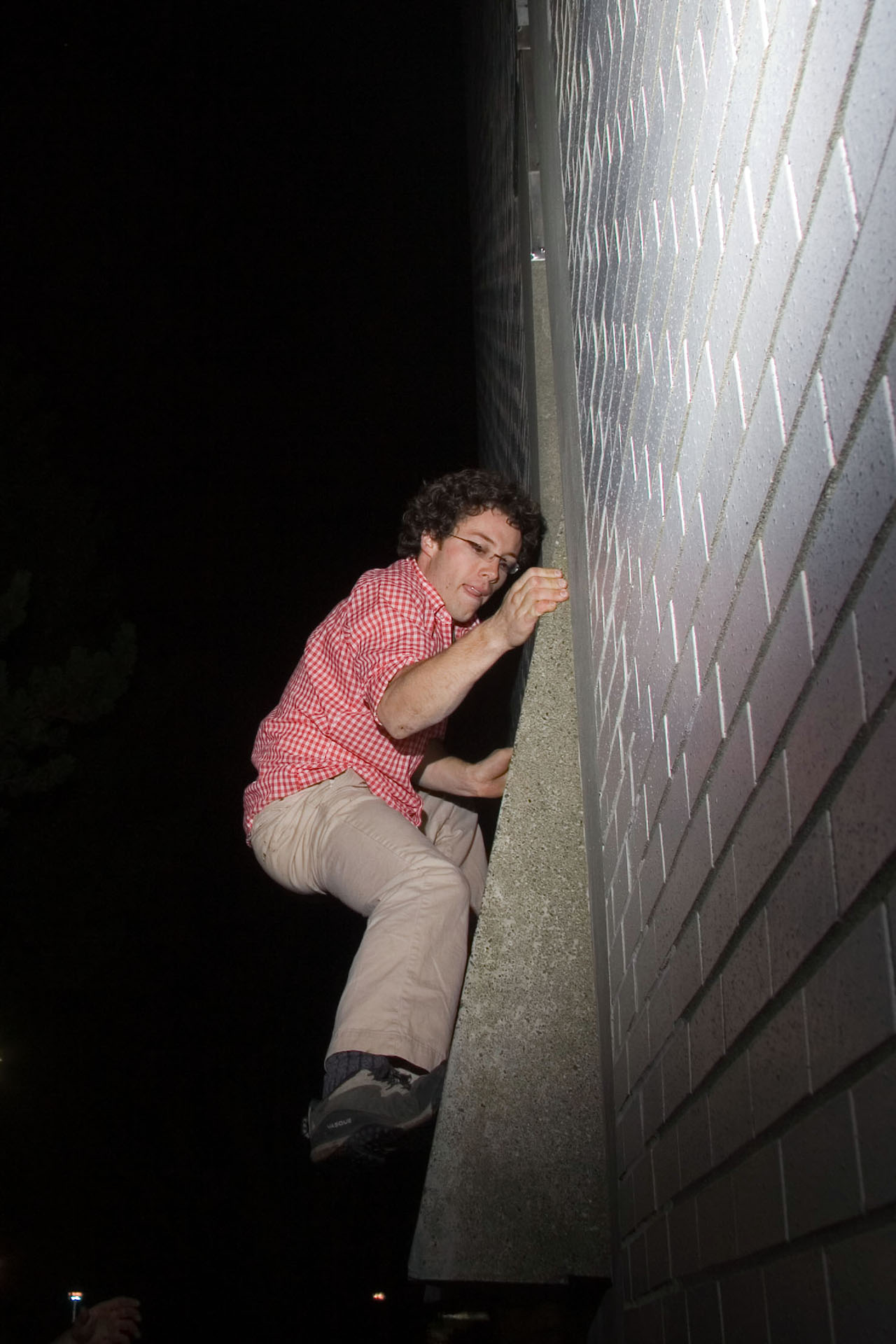 Allan wanted to name this climb “Power of Paisley” after his shirt, but it’s clear it is more of a checked pattern. North Belkin drainage. 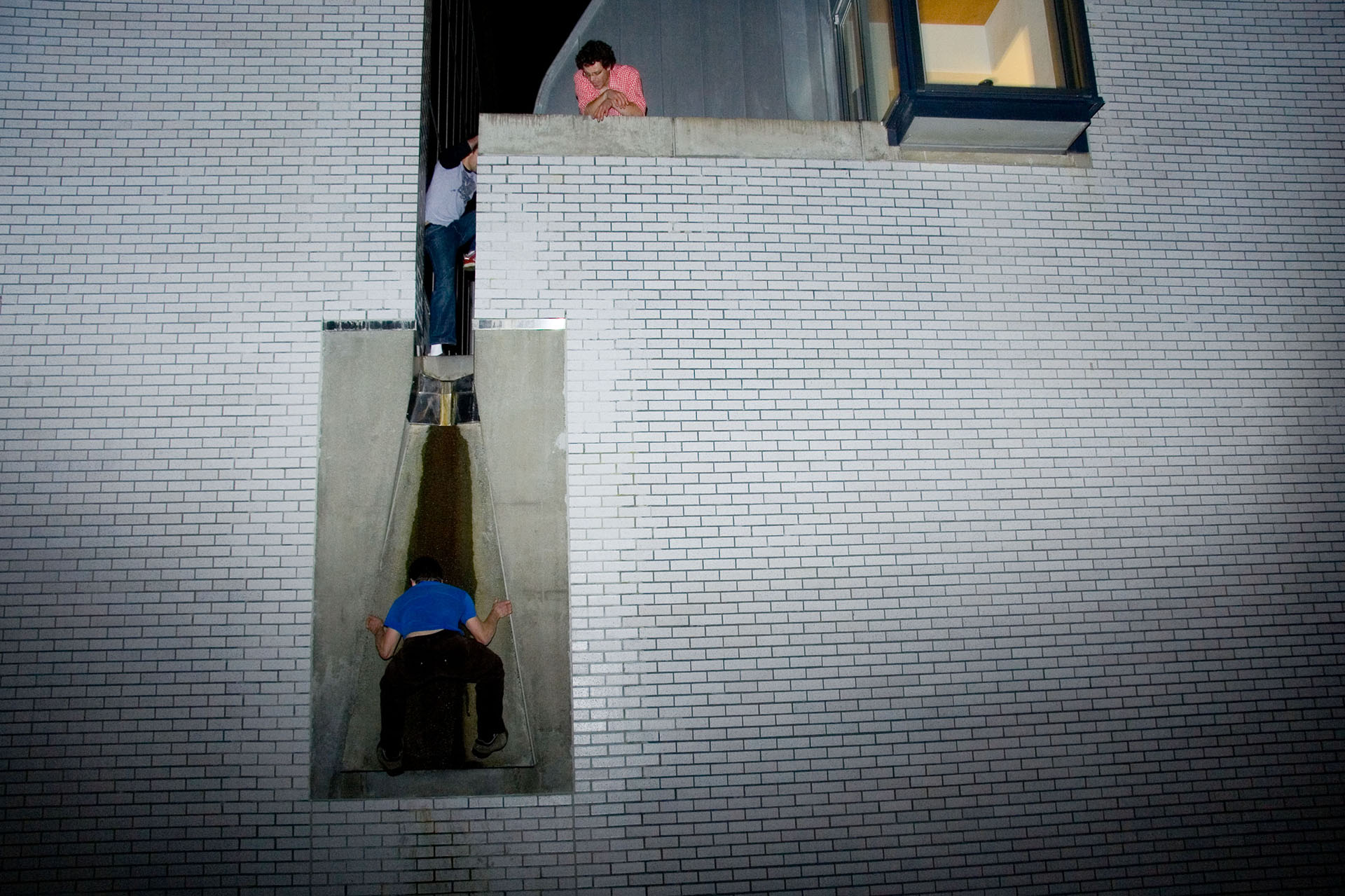 Kenny giving it a go. 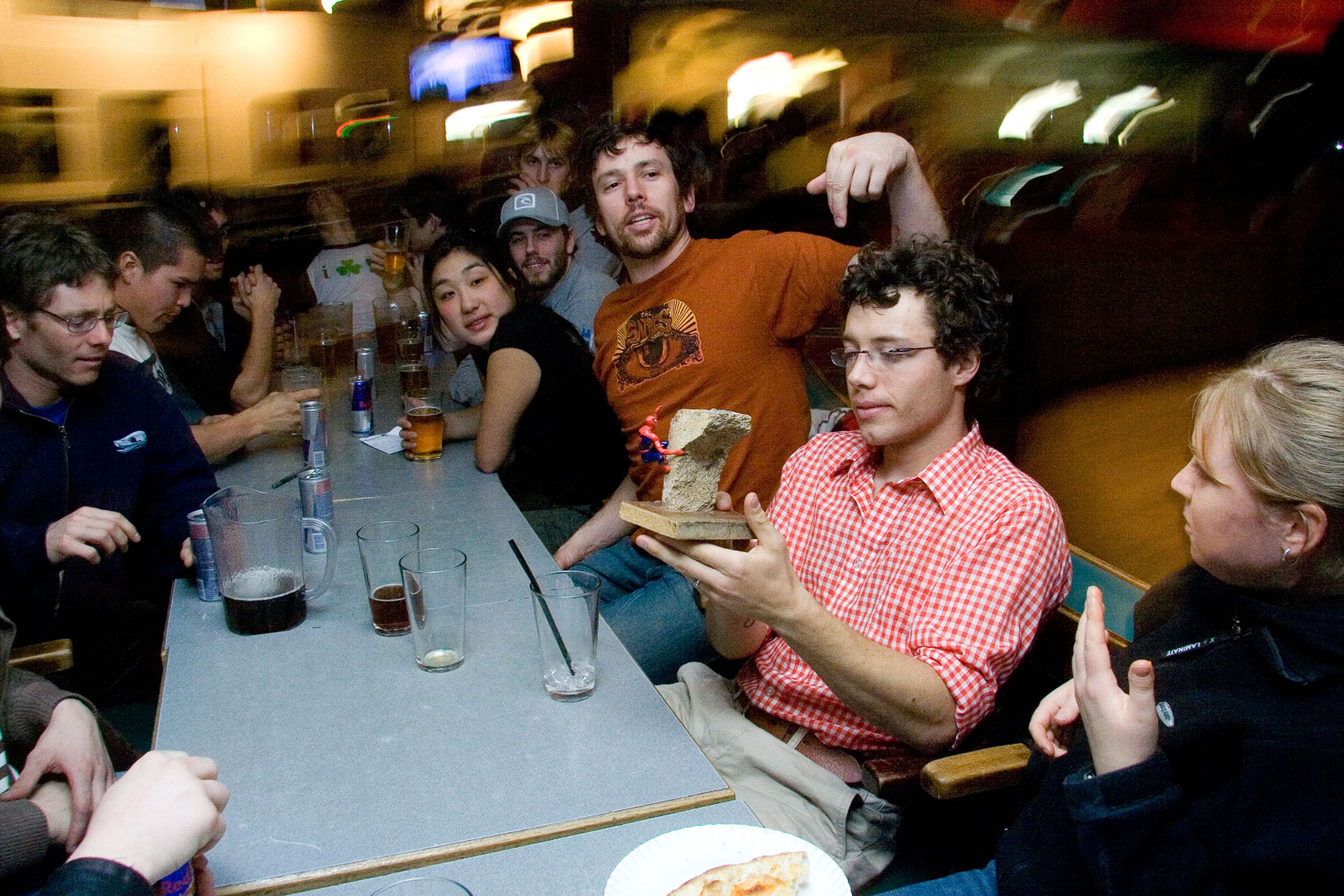 “This guy here, yeah I know this guy. Seriously though.”