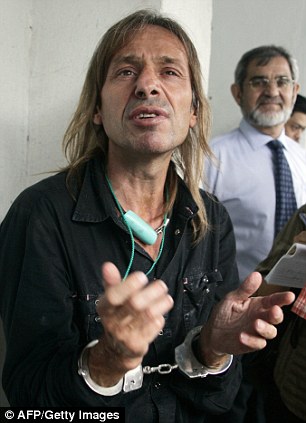 HOUSTON — The French building climber who calls himself ”Spiderman” was thwarted in a bid to scale a Houston skyscraper and charged with trespassing and possessing drugs — two pills to relieve anxiety.

Robert Alain Philippe, 43, was arrested Tuesday as he was to begin climbing the 678-foot-tall One Houston Center building. Houston police spokesman John Cannon said two tablets, believed to be the sedative Xanax, were found on Philippe.

Philippe was charged with criminal trespass and illegal possession of a controlled substance, Cannon said.

He was released on $1,500 bail Tuesday and scheduled for a court appearance next Tuesday, said Rachel Ferrel, coordinator for Harris County Criminal Court No. 11.

In August 1999, Philippe climbed the Sears Tower. When he got to the top, Tower officials and Chicago Police were waiting to help him up — and arrest him on trespassing charges. AP