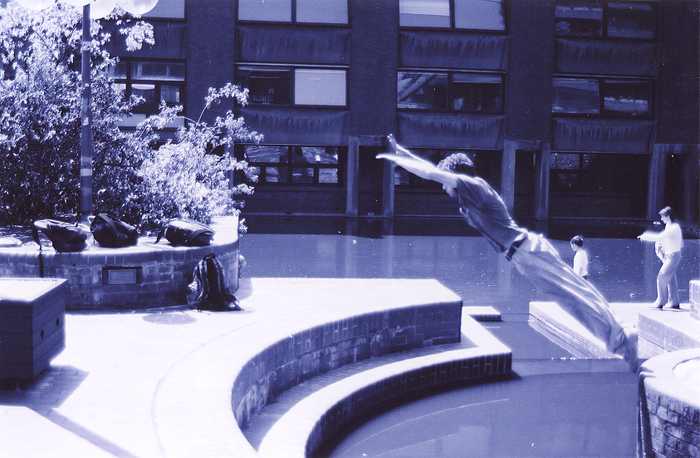 I’ve been in London about three days now and things are really starting to get rolling.

At first London sucked. The people are super preppy and pretentious — but that’s just true for about 90% of the population.

Today I had the opportunity to join the Urban Free Flow parkour gang for my very first PK session. Wow is it ever cool. Huge props to M2, Asid, EZ, trek, the Monkey Milisha crew and everyone else that I can’t remember the names of.  Wow…that last sentence sounded really Drum&Bass-scene-nerdfest, but I assure you that each of those people are quite cool.  I learned how to do a proper PK roll from M2, uhmm a cat jump, and some other stuff. I’ll have a few techniques to show anyone interested back home. We should really start up some kind of parkour thing in Vancouver.

Also there is a killer 24 story building in East London which I’m dying to try. I really have my heart set on it. I just can’t decide if I want to do it during the day, get busted, but get good photos…or at night, possibly get busted, no photos.

I’m thinking the former, but I don’t know how being arrested will affect the rest of my travels. Most I talked to said it would be no problem, I’d get off with a warning… but I’m not so confident. We’ll see.

The building is 24 storeys of a vertical ‘I’ Beam, perforated with holes big enough to fit a carabiner through.  They look a bit ornamental, but seem “semi safe”.  I tried a couple storey trial run though and they seem to hold. If I use a harness, and a couple daisies, I could just aid the dumb thing if I get scared. So now I’m trying to hunt down someone in London who has some climbing gear I can borrow.