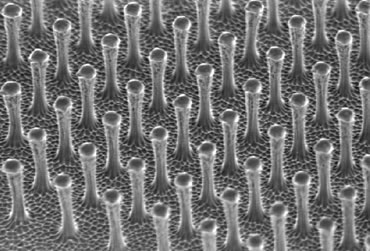 LONDON, England (Reuters). — Move over Spider-Man — mere mortals may soon be coming to a ceiling near you.

Researchers at the University of Manchester say they have cracked the secret of one of the reptile world’s greatest climbers, the gecko, and produced a sticky tape that can mimic the lizard’s gravity-defying abilities.

Soon, people could walk on walls like comic-book superhero Spider-Man, the university said.

“The new adhesive — gecko tape — contains billions of tiny plastic fibres which are similar to natural hairs covering the soles of geckos’ feet,” the University of Manchester said in a statement.

“The research team believes it won’t be long before Spider-Man gloves become a reality.”

Bob Full of University of California, Berkeley, who was also involved, said the technology could be used for handling computer chips and could have applications in medicine.

Plans are under way to produce larger pads and to improve the tape’s durability, said the journal Nature Materials, which published the paper. But some involved in the project believe the cost is prohibitive.

“We have considered producing a large amount of gecko tape, sufficient amounts to enable a student to hang out of the window of a tall building,” it said. “However it would cost too much money, and would not benefit us scientifically.”