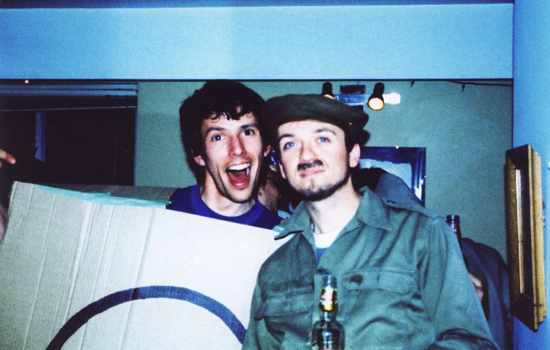 I usually don’t celebrate my birthday, and then I’m always sad at the end of the day because no one acknowledged it. Thing is I don’t tell anyone when it is, so it’s really not their fault.  So this year, instead of having my own little pity party, I decided to throw my own birthday party. I (loosely) disguised the birthday aspect of it by calling it an “S” party instead. What’s an “S” party? A party where you dress up as anything that starts with an “S”. So like superman, or a sugar-glider, or a sexy senorita. Why “S”? Why not. I can think of lots of fun words that start with the letter “S”.

Here’s a few pictures from the party. The first one is me (dressed as a scrabble piece), and Scottie (dressed as Saddam Hussien). I love Scottie. My original plan was to dress as Saddam, but I couldn’t find a beret, or an army jacket. But I could find a cardboard box in the dumpster.

The second picture (L to R): Dru as a surfer (not to great of a costume, but he gave me the best gift ever… the new Kid Koala book, so I forgive him), Roberta as a sack, Chris as a sorceress, and in front… the stunningly sexy stud Mark dressed as himself (a stunningly sexy stud). 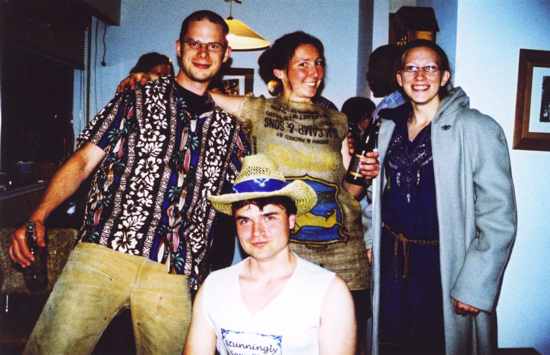 The party was a blast. I tried to bring all my friends together on this one: the church crowd, the band crowd, and the climber crowd. It seemed to work pretty well, no major brawls. We danced the night away, then did a little buildering on the Toys-R-Us sign. Kudos to Conor for trying that crazy throw 10ft of the deck (and kudos to Mark for catching him). Thanks to all who came, I feel honored to have such good friends.