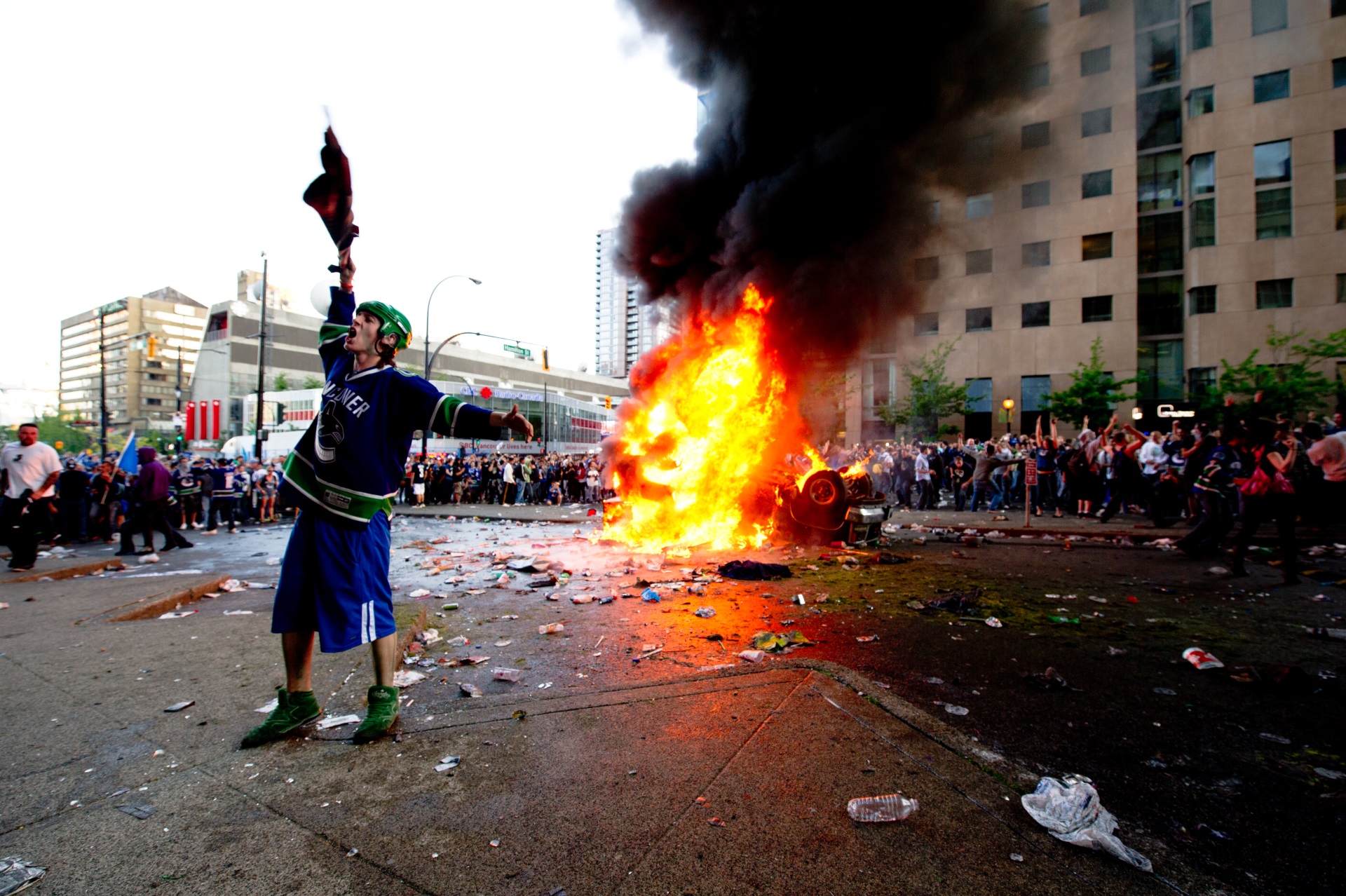 In an environment where anything goes what do people do? Some people break shit. Others steal things. Others start fires. Some try to stop the crimes. Some cheer and egg the crimes on. Fights break out between the “good and the bad,” and between those just wanting a good fight. Some look on with righteous indignation. EVERYONE wants their photo taken. 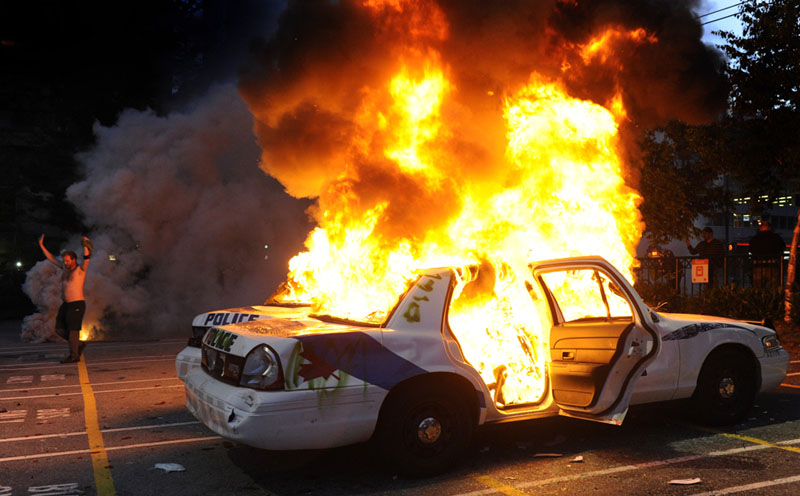 As an observer in the thick of the recent Vancouver riots, it was certainly a fascinating experience. I could try and redeem myself, like the many who went on camera to say “I’m shocked”, “I’m ashamed”, “Disgraceful”, etc. — but the majority those people are hypocrites and liars, or are self-righteously judging far away from the action. The riot was entertainment. Not the most wholesome of forms, but entertainment nonetheless. 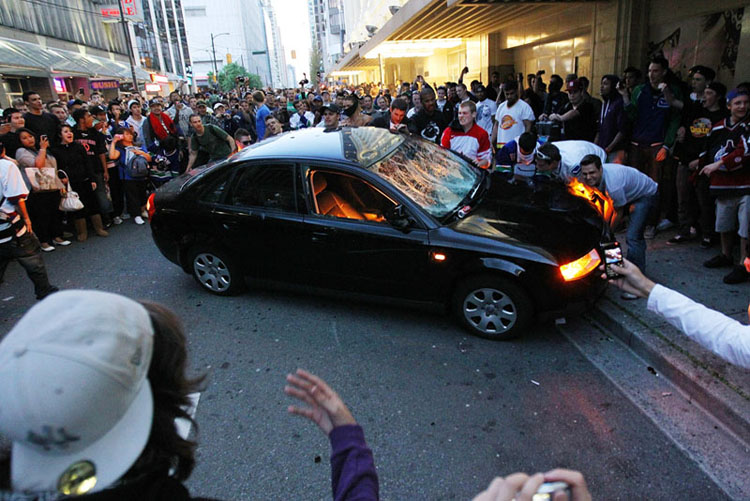 I didn’t have the urge to destroy anything. Inanimate objects don’t anger me. Getting in a fight is no fun, even if I’m guaranteed to win. I’m in no real need of things, especially from The Bay. Probably about as active as I got was to tell one person he was a fucking idiot and was going to get hurt as he stood between a car and a group of people trying to throw rocks at it. He was pleading “this is OUR city, this is OUR city, what are you DOING?” Big heart I suppose, but still a fucking idiot. Wrong place, wrong time. This wasn’t going to be a kumbaya moment where everyone suddenly realized the error of their ways, or people banded together the overcome the troublemakers.

Anyone who thinks the riots were an angry response to the Canucks losing the cup is just wrong. There was the occasional “Fuck Boston!” from those trying to justify their behavior with feeble logic. People wanted to party, plain and simple. The tone was more Mardi Gras than angry mob.

Put 100,000 people at various levels of intoxication in a small area with nothing to do, and they’ll find something to do. The best way the city could have prevented this was to organize a MASSIVE distraction immediately after the game.

Like how about a running of the bulls down Seymour street. Why not? It would’ve caused a lot less damage, and what amped up, Tapout wearing, drunk 20 year old male is not going to say “oh…we gotta get out of the way for the RUNNING OF THE BULLS! Fuck ya!”

Give people a reason to move and they’ll move. Give them something to watch and they’ll watch. Don’t give them anything to do and, well, they might riot. Didn’t we already learn that from the Guns and Roses riot in 2002?

Once the first car went up in flames, I can see how people easily got sucked into it. Here was rare opportunity to do whatever you want without repercussions. 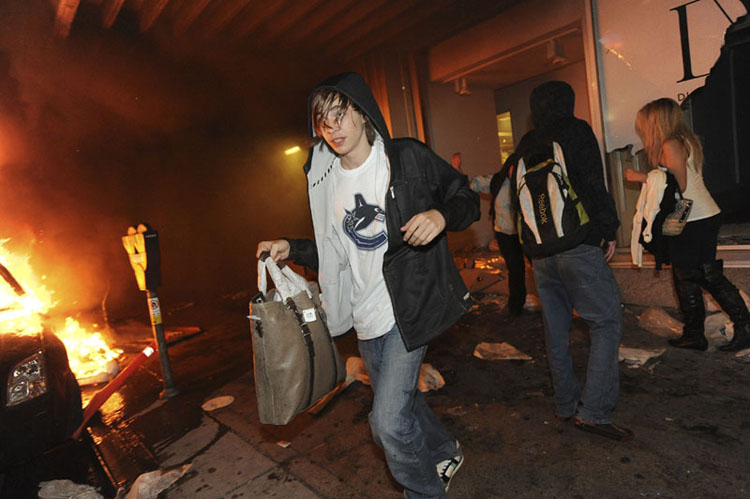 If someone wanted to leave, they were there to guide. Anyone who claims to have been scared for their personal safety is being melodramatic. There was ample opportunity for protection and to leave. One officer told me, “Careful ahead on the right, there are people breaking windows.” He was right. A piece of asphalt, seemingly chiseled out of the road, whizzed my head and bounced off some tempered glass.

The police attended to the fallen: people hit with flying objects, brawlers picking fights and losing, idiot-braves trying to stand up for their city, drunks too inebriated to navigate safely.

Police Chief Jim Chu said it best when questioned on police tactics, “Our priority was not the protection of property, but the protection of the people.” Right-fucking-on. I have a newfound respect for the VPD. Damage to the shops will be covered by insurance. I suppose it remains to be seen how the thieving bastards at ICBC deals with people who had their cars parked in the area. 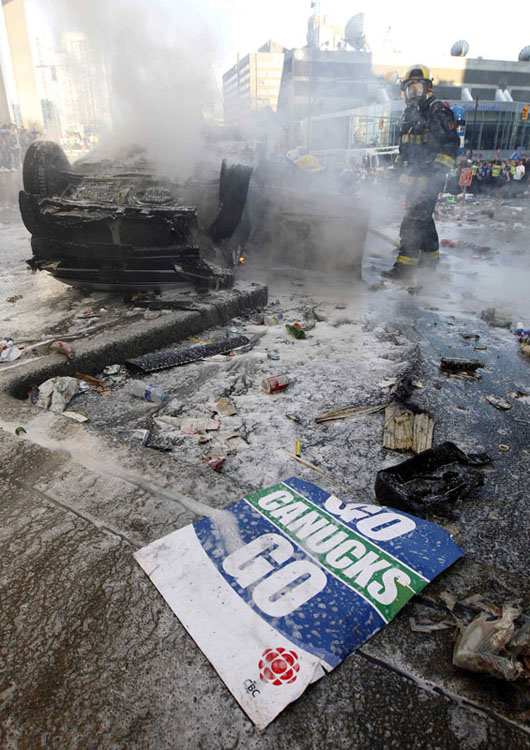 One of the heroes. (p) Mike Carlson

When the police did mobilize to clear out an area and get fire crews in, it was with a smile on their face. I’m not kidding, I saw cops SMILING. They played a warning broadcast that went something like, “This is the Vancouver Police Department. This is unlawful assembly. You must leave the area now. Please leave the area by walking north along Richards Street. Those who do not leave will be arrested with the appropriate level of force deemed necessary by _____ (some committee or standard…I didn’t catch that part). If you need assistance, please let an officer know and we will happily and safely assist you.”

After awhile, when people still weren’t leaving, they changed the message to “Warning, in 5 seconds we will use LRAD by American Technology Corporation”, a deafening noise emitter, which apparently, gauging from the response of the people, is well known. “5, 4, 3, …” – people scurried like ants. They called off the blast at 3.

The only time I saw police chase someone down, was when a guy shoved a firefighter. Good.

Those locked in riot mode, high on the adrenaline of breaking, burning, and looting, persevered for several hours. Then the tear gas put an end to that. My only complaint with the VPD was that they didn’t use more of the stuff, and sooner. Perhaps, in our overly litigious society, they wanted to be sure all innocents were cleared out first.

The mixture of burning plastic and tear gas lingered throughout the night, spreading over the entire downtown core.

As people dispersed, I eventually got bored with the show and left. Once you’ve seen a burning car, a burning dumpster, and a burning Porta Potty, you’ve about checked off your to-do list.

One thing is for certain: it was a very well documented riot. Many who thought they got away with it won’t. The majority of the arrests will be first offenders, and there will be sleepless nights for the offenders as they wait for that inevitable knock at the door. Some will turn themselves in. Expect front page headlines, “Can you identify these persons?”, in the near future.

My only concern regarding the aftermath of the riots is how things will change for future public assemblies. As society is largely based on trust, this loss in trust of a few hundred(ish) people could have a pretty big impact on the rest of us.

Some memorable quotes from the evening:
“I just threw a bag of hot dog buns at a cop!”
“Get off the car you stupid bitch, it’s going to explode.”
“Get out of the way!” — Man holding brick, to me.
“Don’t go down there, there’s a guy shooting people.” (There’s no account of such a thing happening.)
“No honey, guns go ‘crack, crack’. That’s probably just a car exploding.” 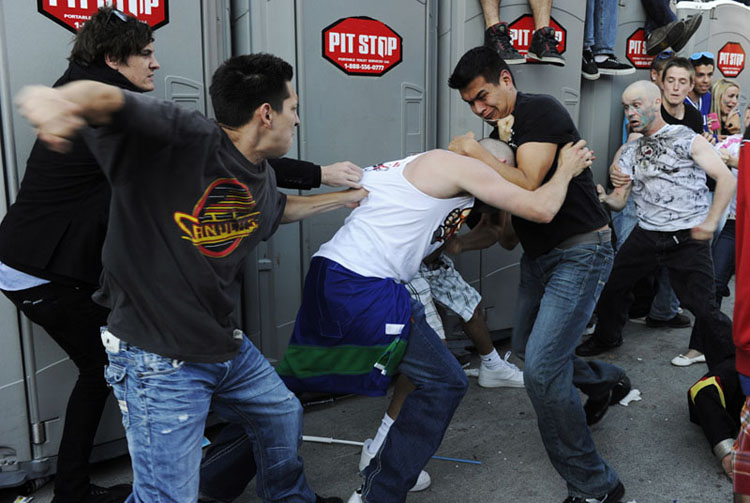 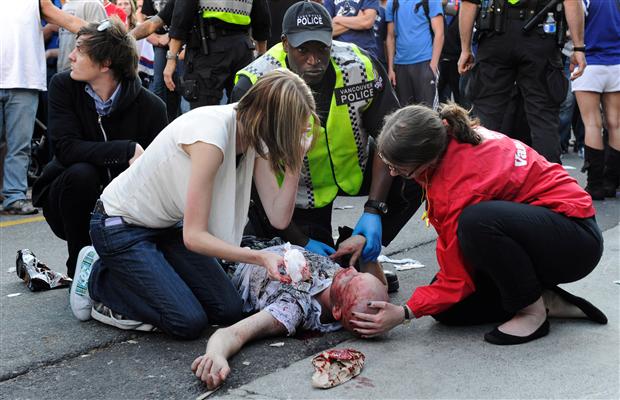 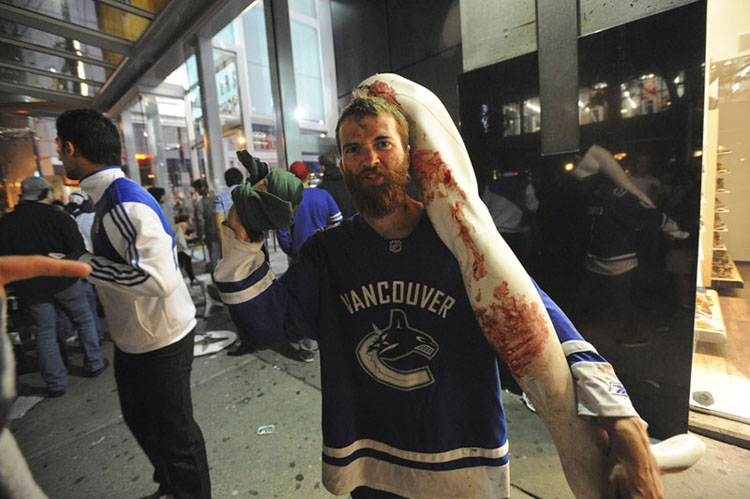 If you’re going to incriminate yourself, best make it badass. (p) Jason Payne 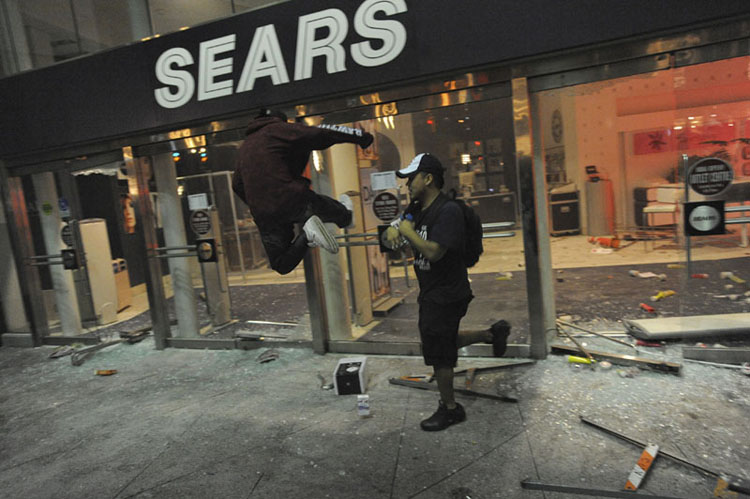