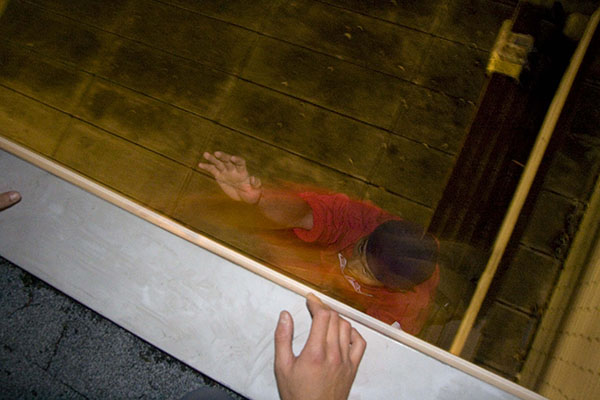 The “alpine traverse” of UBC buildering. It’s got ups and downs. The ups are easy yet enjoyable, and the downs are committing.

The 1968 Cragrat’s Guide details a shoulder stand to gain access to the final northern roof from the breezeway, however this is a bit of a pain — especially for the second person. Plus you now need to bring a rope to rappel. To avoid this, we’ve always climbed through a window from the roof of the breezeway, which is challenging in and of itself.

However on one attempt a few months ago, a group of us had just dropped down onto the breezeway roof, when we noticed that they had replaced all the windows with new double paned ones that only crack open an inch or two.

Ropeless and somewhat stuck, we proceeded to reverse the route via a shoulder stand. At this point a security guard spotted us from his nearby security trailer, and radioed for backup. Cody, the last man on the roof, was unable to reach up and grab my hand. Instead he jumped from the roof of the breezeway to the roof of the security trailer — a 10′ gap with a 12′ drop. He didn’t stick around to see what the security guard had to say.

Now that the trailer is gone, one had better be prepared to climb the entire route before committing to any drops. 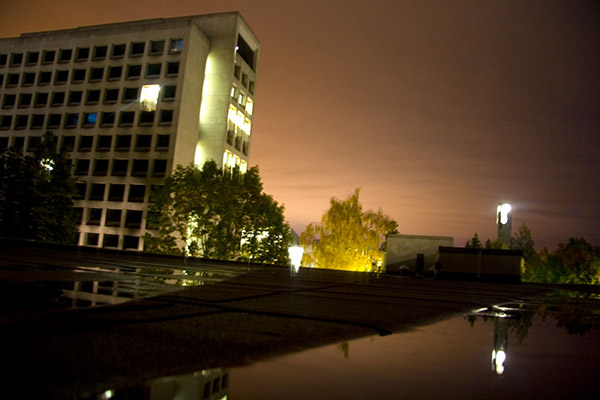 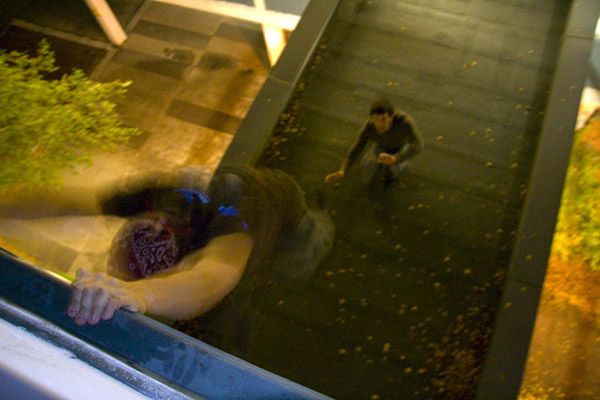 Boris on the drop of no return. (p) Oker. 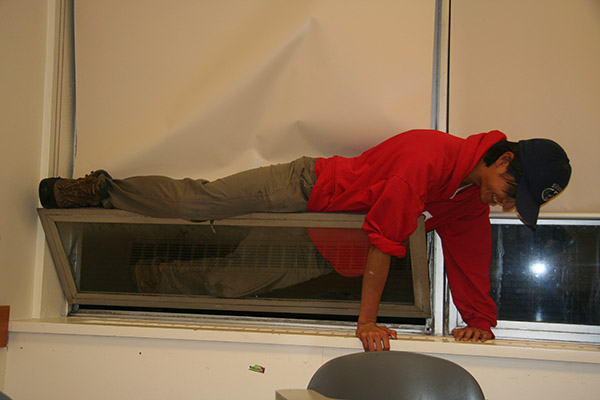 This is generally considered one of the more enjoyable climbs on campus — not difficult but fairly lengthy. It begins on the large brass decoration just to the left of Buchanan’s western entrance, and by means of this the first section of roof may be gained. [2008: a bench was added. Stand on bench and jump to roof.] Turning south, ascend to next roof level by means of a shoulder stand, the last man coming up on a rope or by claw hammer and slings. [2008: a ladder was added.] The next problem is getting to roof of the penthouse, which may be done by a direct mantleshelf from a railing, but be damn careful not to swing a foot through the picture windows. [2008: climb up the north east corner of the penthouse, using the door hinges for feet. Same warning applies.]

There now comes two downhill steps. The first of these may be done with the aid of a wall bracket and door handle. Climbers jumping this directly on dark, rainy nights may be in for a surprise, as roof holds considerable water. The second step down onto junction with north Buchanan is a straight dangle and drop job. [2008: And the point of no return.]

Now comes the problem of climbing to next roof, generally accomplished by combined shoulder stands and mantleshelf, or shoulder and claw hammer. This ends the difficulties. Rappel from snorkel pipe on inside corner of eastern section of building. This provides mild shock for anyone using adjacent stairs at time.