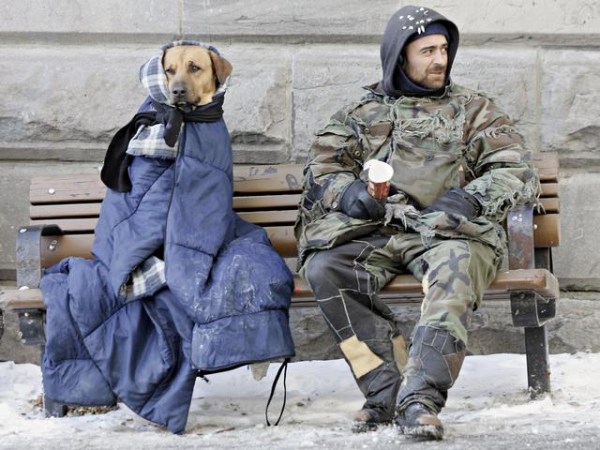 This dude gives me a boner. Ladies and gentlemen, I present to you the Brad Pitt and Angelina Jolie of homelessness. She’s the one on the left.

I often dream of becoming homeless. To me, the homeless-by-choice subclass of the larger homeless person genus are the kings of modern day civilization.

No work, people give you free food and money, fresh air, no work, a lean and mean physique, no work, no taxes, no work. I consider myself quite resilient, so the sleeping outside thing wouldn’t be an issue. I’m never bored, so scratch that. I have a healthy disrespect for the *normals*, and as such I’m impervious to their disdain. I’m pretty clever, and could quickly learn to milk the different systems, stay safe, and protect my few possessions. Like the guy in the photo: he’s got shit figured out. He’s happy and reaping the rewards of his brilliance.

My desire to be a bum works wonders when talking with them. This is beneficial when happening upon one in the presence of a woman. Females mistake my easy going camaraderie with compassion. Little do they know it’s out of respect and envy.

The whole cops thing would suck though. Cops suck enough as it is, but when your life is on the street and you’re the target of a their misplaced aggression for being entirely average in life, it really sucks. I’ve seen an undercover cop walk up to a sleeping bum and kick the shit out of him. Why? Because he was sleeping outside, which is illegal in Vancouver. He fought back a bit, until the cop said “don’t you fucking dare, I’M A COP!” Plus he got a $75 ticket. If he doesn’t pay the $75, he goes to jail and Angelina (on the left) goes to the pound. It’ll cost Brad another $200 to bail her out, or else she gets put down. Cops know bums haven’t got the money to bail out their dogs, so they use this as a scare tactic. Being a bum is expensive — that’s why I’m saving up.

So what prevents me from selling all my possessions and taking to the streets? I’m too big of a pussy I guess. Fear of the unknown. Also, I have a slight moral quandary over being a parasitic element to society. However, given the state of present day society, I can’t say I’m awfully proud to be a contributor.

Ultimately though, I think after the wheee-i’m-camping-out mentality wore off I’d realize that it’s a pretty harsh lifestyle, one that takes decades off of your life. I don’t want to look like I’m 65 at 40. There you have it: vanity is the biggest reason I don’t want to be a bum. Of course if you are a Colin Farrel doppelganger like our man in the photo here, you’ve got nothing to worry about.