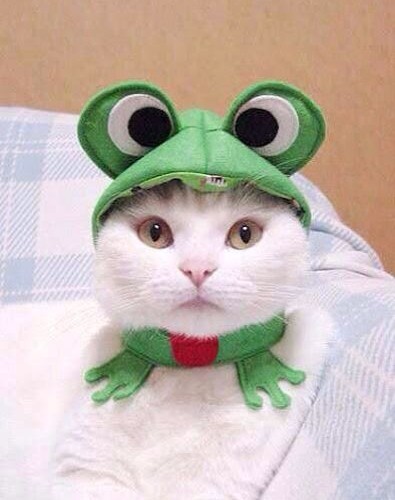 I found a great sushi place near La Villa called Applause sushi. Nobody knows about it, and unfortunately their location isn’t conducive to random passer-bys (welcome to Marpole).

I eat there almost every night, partly because I feel bad that them, but mainly because the food kicks ass. I’d go so far as to say it’s on par with Tojo’s, the famous $100 a head sushi joint.

The other night I was having my usual fare – anything with the word “spicy” in it – and reading the new Vice. One must be careful reading Vice in public, since the majority of the magazine is dedicated to naked girls selling clothes. I know it sounds counter-intuitive, but advertisements where the girl isn’t wearing the product are far more effective. Just throw a logo somewhere.

So I settled on an informative article about a crazy Japanese lady who sells clothes for cats. It’s fascinating stuff. Apparently people have been dressing up their dogs for years, but nobody has considered doing the same for cats. Perhaps it’s because cats are wily little varmints, and freak out the second you try to put clothes on them. Anyway, the Japanese lady must have found a retard cat for a model, and she’s making a killing selling outfits over the internet.

When the nosy female staff at Applause saw what I was reading, they went completely bonkers. “Awww….cute, cute, CUTE.” I’ve never before heard them utter a word of English, so “cute” must be pretty damned important to take up such a large chunk of their English vocab. Cute, cute, cute, CUTE. They ran into the back and grabbed the chefs, who eyed me suspiciously. “You like cats?” I felt my manhood dissolving in front of them. “NO…I HATE CATS OK? I JUST FOUND THE ARTICLE INTERESTING.” The girls gave me a confused look, and the men, still suspicious, returned to cooking.

Now that I’m safely back in my house, drinking a can of Old Milwaukee (the pinup girls ones), I can safely say that this little retard cat is pretty damn cute.