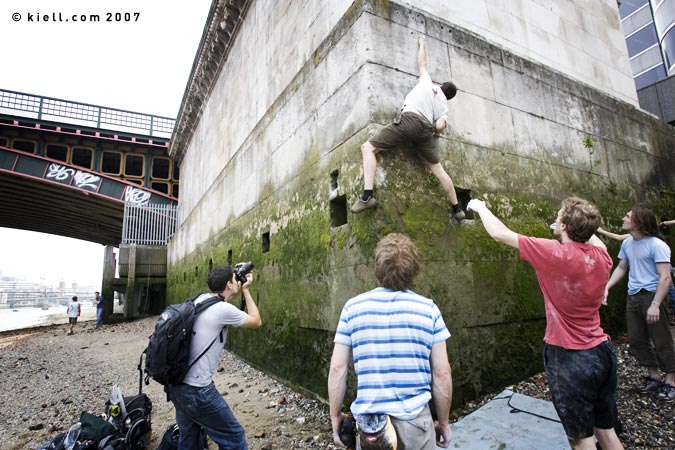 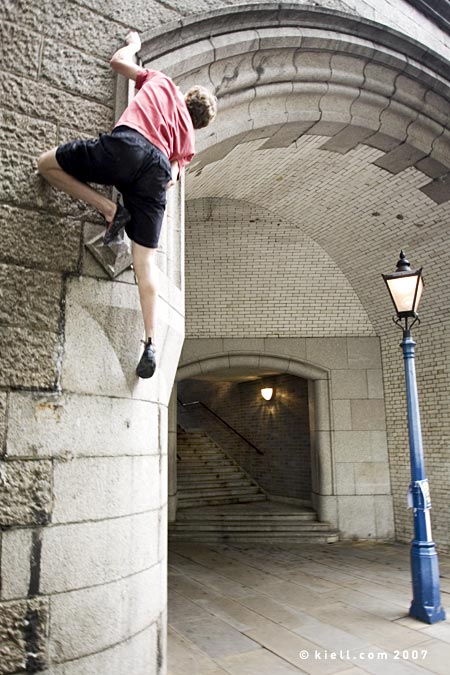 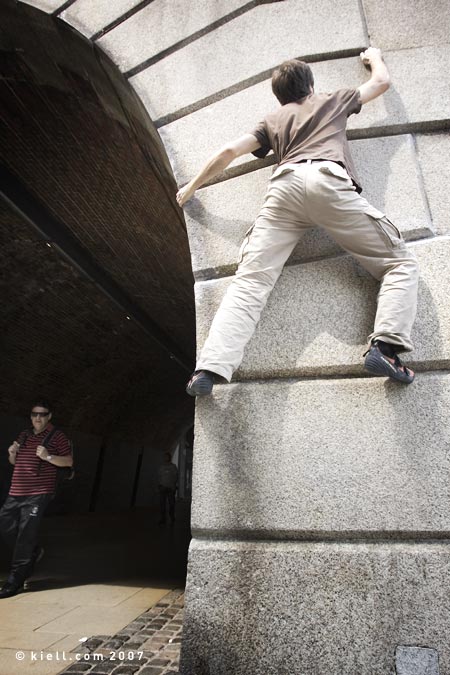 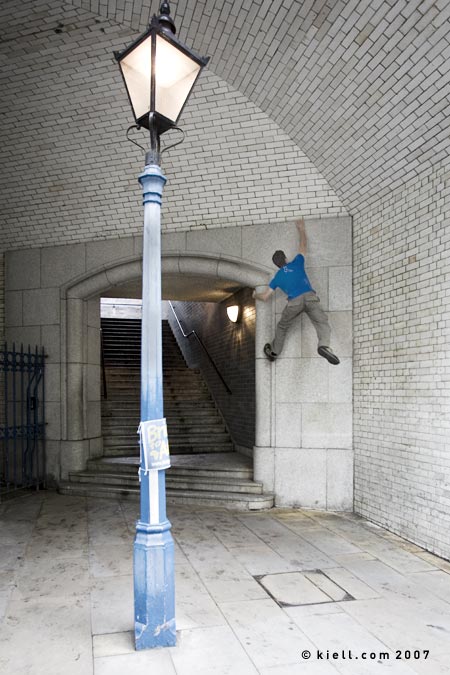 On Saturday June 9th I joined 30 or 40 other climbers for the London Buildering Championships. I wasn’t sure what to expect – would it be well organized? Would it be a constant game of cat and mouse with the police? Would there be any decent climbers attending? Would people be as friendly as they are at the indoor walls?

Caedmon, the guy behind the event and the website – www.londonbuildering.co.uk [update: site 404] – had done an excellent job in preparation for the day. We had maps (in colour!), scoresheets and a nice sense of anticipation as we gathered alongside Tower Bridge at 10am, hoping the intermittent light rain would disappear. From the nearby warm up problems, it became apparent early on that the standard of climbing was going to be pretty high. Sadly I was suffering from a shitty cold and have a bit of tendonitis in my elbow so I was resigned to spending most of the day watching and grabbing a couple of snaps.

A group of 40 odd people carrying climbing shoes, small bags of chalk and the odd bouldering matt was bound to draw attention. Said people then climbing walls in the terrorist-twitchy-overkill streets and alleys of central London was inevitably going to create some problems. Sure enough, Tower Bridge security soon turned their cameras upon us and the group decided to move after a friendly warning. Police intercepted within a few minutes and, to our astonishment, seemed generally bemused but not aggressive. We feigned ignorance (helped by the dazed, early start) and kept moving. Once we were out of The City and heading towards the South Bank, we shook off the City Police and entered the domain of the Metropolitan Police who clearly have better things to do on a Saturday morning.

We split into two groups, the first attacking a couple of problems at Southwark Bridge, the second taking on the plethora of challenges presented by Millennium Bridge. Sadly, the latter is a bit more exposed and has its own security so if you make your own visit, don’t hang about.

The low-tide banks alongside Blackfriars Bridge proved to be a goldmine. The first six feet is slimy as hell with a series of large but awkward indents to help you through. There’s then some precarious arete moves and the odd mono for the short-arses before a comparatively easy traverse to top-out. My head said yes but my body said no, so it’s definitely one I’ll be heading back to. It’s worth noting that the low tide ‘beaches’ around the South Bank are entirely public property, generally free from CCTV and provide a nice viewing gallery for the passing tourists.

A subway underneath Westminster Bridge presented a fantastic arch that starts as a nice crack and rapidly turns into an evil sloper rock-over inspired me into performing the day’s best fall. Having watched Adrian Baxter (British Climbing Team) pretty much campus the crux, after my heel hook slid off I foolishly attempted something similar. Thanks to everyone who caught me.

The two groups merged as we continued west along the south bank of the Thames with a couple of problems en route. Maybe it was the difficulty, maybe it was being right outside MI6. Either way, Vauxhall Bridge separated the men from the boys, inspiring Simon Tappin to step up and have a bash, admittedly in his flip-flops. A long walk then took us through towards Battersea, the style of problem changing as the walls became the dilapidated cladding of run-down housing estates and crimpy, crumbly brickwork. Chelsea Bridge offered a real treat to both the hardcore and casual spectator alike – a highball crack problem which even drew a respectful audience from the river police, watching quietly from their boat.

Sadly I had to dash off before the prize giving but be sure to check out the LondonBuildering forum to see Caedmon taking an alternative route across Albert Bridge. Our thanks to Caedmon and the other organizers for all of their efforts in creating a very enjoyable event and one that’s already inspiring climbers across London to step in to the city and start exploring the urbanity £