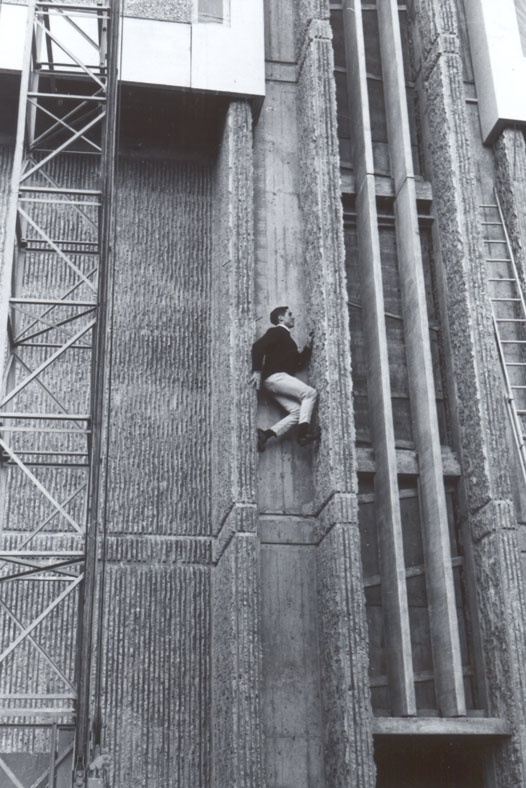 There are university walls and then there’s University Wall.

Filmmaker Ivan Hughes captured the essence of both in his latest short film.

Back in 1965, as the film says, students were getting bored, so they climbed to beat the city’s long, dreary winters. Using Night Climbers of Cambridge as inspiration, Cragrats Guide to UBC became the bible to climb campus buildings.

“Many of the big names in west coast climbing and mountaineering that were part of the [Varsity Outdoors Club] were up to that same stuff,” Hughes said.

Tim Auger was one of those who could be found in cracks and crevasses of the university’s modern and heritage structures. Auger, who was a Banff National Park warden and rescue specialist until retiring, referred Hughes to climbing buddy Glenn Woodsworth. Woodsworth had grainy, old 8 mm footage stored in basement boxes showing Auger’s exploits.

“That was like finding a treasure,” Hughes said. “He hadn’t even seen it in years. The footage made the film.”

Auger, Woodsworth, Dan Tate and Hamish Mutch climbed what became known as University Wall on the Chief. Auger liked to tell his mother he was spending every day at university. He just didn’t tell her which one or what he was really learning.

“It’s shocking the climbs they were doing back then on very marginal gear, pushing the limits of boulder lines and more adventurous lines and taking more risks,” Hughes said.

Hughes wants to use the short film as a springboard to a bigger project examining the history of the human fly with footage dating back to 1910. As long as buildings have been getting taller, people have wanted to climb them and even jump from them. The world’s greatest “spiderman” would be Alain Robert, a Frenchman whose pastime is to climb the world’s tallest buildings.

“It’s been going on for a long time, but it’s always been subversive, outside the public eye except for these show climbs,” Hughes said.

To those that partake in the activity, it’s called buildering. For the rest, it’s simply bewildering. It is alive and well at UBC.

“It’s definitely taking on a culture of its own, not just a distraction from climbing,” Arvin said. “There’s a lot of challenges in buildering you wouldn’t find on a rockface and different movements.”

Arvin boasts conquering every major building on campus. “The high point for me would be climbing the Arts Tower, 13, 14 storeys. I wouldn’t say it’s popular because it’s not easily accessible by any means.”

Arvin prefers not to use chalk or equipment that will leave a mark. It’s a no trace philosophy, built on mentoring.

“If we’re going to do anything more serious I need to know if they have a climbing background and know how to use gear. It can be a deadly sport if you’re over your head and out of your element,” he said.

VIMFF opens Friday at North Vancouver’s Centennial Theatre with Dan Mazur and Andrew Brash and their Debacle on Everest and the Rescue of Lincoln Hall. The festival continues through Feb. 24.