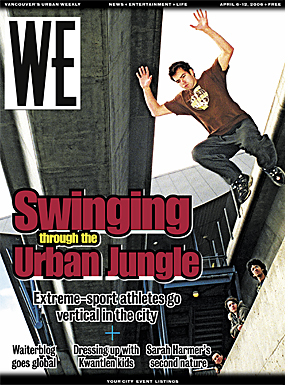 Westender: Swinging Through The Urban Jungle

By Chris Stephenson
As appearing in the Westender, Apr 06 2006

Ard Arvin arrives at the UBC Students’ Union Building (SUB) cafeteria wet from the drizzling morning rain, wearing a red windbreaker, jeans and carrying a black bike bag. Students carry on their morning ritual of sipping coffee before class, unaware he is not a student. Ard as he known on his website buildering.net is there to practice a unique take on rock climbing called ‘buildering’. He offers a handshake. To be expected of someone who scales buildings for sport, his grip is painfully firm. “Buildering means to climb a man-made structure of which the design is for purposes other than climbing. If it was made for climbing it wouldn’t be as fun,” Ard says with a grin.

That day in Burnaby, a cluster of teens and twenty-somethings hang their arms over a sidewalk railing in front of a convenient store at Production Way SkyTrain station. They laugh and joke like a normal group of young guys with nothing better to do on a Friday. But, they’re far from bored. The group’s gearing up for a session of parkour’ and ‘tricking,’ using the railings, walls and stairs around them as their playing field to do flips, balancing acts and jumps. Dane Shoebotham — who practices both — defines parkour, which originated in France, as moving efficiently from point A to point B, regardless of the obstacles in his way. “If you were being chased by a lion you would just want to get away as fast as you can. That’s parkour.” Tricking on the other hand, is more akin to freestyle acrobatics. “The movement is more free and not so much about efficiency,” he says.

As urban centres continue to grow, more buildings are being built for convenience and comfort. But for those who engage in buildering, parkour and tricking, these structures are little more than oversized jungle gyms, to be used in ways seen by outsiders as dangerous and often illegal. While these underground sports were never intended to hit mainstream, they are picking up popularity around the world. Parkour founder David Belle and co-founder Sébastien Foucan developed the discipline in Paris in the late 1980s and have been featured in various commercials from Nike to Toyota. Buildering was first recorded in the late 1800s in England but it never hit the spotlight until climbing icon Alain Robert began scaling skyscrapers in 1994. Since then he has climbed over 70 buildings and monuments including “ Taipei 101” — the tallest skyscraper in the world, in Taiwan in 2004. Still, these sports remain on the fringes of public acceptance in Vancouver.

Ard explains he got into scaling buildings as an alternative to climbing in Squamish. Instead, he and his friends would climb around on the UBC campus buildings. “Eventually it became something that was more fun. [Rock climbing] is kind of a serious endeavour whereas buildering is usually just about having fun. You’ve also got the whole running-away-from-security-or-cops and that adds to the rush.” Ard’s involvement with buildering started in1996. Since then he’s conquered several of Vancouver’s familiar structures, mostly without safety equipment. Some of his accomplishments: the Koerner Library at UBC, Science World and the towering Toys ‘R’ Us sign on Broadway. “[Toys ‘R’ Us] is a favourite of mine,” he says. “I used to have an apartment right across the street from it so I would just run up there every night. We’re planning on putting a couch up there at the top and just hanging out up there with some beers.”

With a break in the clouds, Ard and friend Steve Begin leave the SUB cafeteria to a wall on the new wing of the UBC library. It’s a five-story concrete slab of large brick-like rectangles with small cracks in-between — large enough to fit a few fingertips. With only a pair of sticky all- terrain running shoes, Ard easily climbs up 10 feet and climbs back down. “I would never attempt the whole wall without a rope. This climb is pretty tricky, as the edges are slopey. There’s a good chance I’d run out of stream two-thirds of the way up and be stuck,” he says, barely winded. “The rule is, you don’t go up anything you might get stuck on, and not be able to climb back down.”

Ard’s safety guidelines for the sport may satisfy his own conscience, but authorities see nothing fun or safe about climbing buildings or using city structures to perform flips and tricks. Hubert Lai, university counsel at UBC, says any activity that poses a high risk for injuries is not permitted on campus. Although he’s not aware of any students buildering at UBC he says anyone caught could face trespassing charges or disciplinary action from the school. “[Those activities] certainly don’t fall into the design of the buildings. We don’t know if they are going to damage the buildings when people are scrambling over the exterior of the surface and we are also concerned that someone is going to fall down and get badly hurt.” If someone is injured the university could be held liable because the buildings are not safe for that activity, Lai adds. Still, he’s somewhat sympathetic. “It’s obviously a real rush for them; they wouldn’t do it if it wasn’t a real rush.”

For the group practicing parkour and tricking, security can also be an issue. Whether they’re flipping off a two-story parkade or walking along railings, they’re usually on private property. Rene Scavington, who’s been practicing parkour for one year, says most of their confrontations with security and police have been about liability issues. “What it comes down to is, it’s their private property and if they don’t want us hanging out there than we have to respect that,” he says. Scavington, Shoebotham, and their group end up at a 10-foot wall beneath the SkyTrain station to show off some parkour and tricking moves. Like an acrobatic circus team they impress with carefully executed back flips, side flips and jumps, using nothing more than the wall itself. “One of the things that inspired me when I was younger was watching Jackie Chan movies,” Shoebotham says. “I didn’t know what parkour was, but I think a lot of people got inspired by him. It was amazing what he could do.”

Despite the seemingly easy execution of their moves, they’ve prepared with rigorous training. For both Scavington and Shoebotham, practicing is an everyday thing. They use the sports not only for the ‘wow factor’ but also as a discipline to strengthen their minds and bodies. The pair organize sessions using an open forum on their website zanshinstudios.com. The website includes tutorials teaching the basics of jumping and landing, but Scavington says now that the sports have grown, beginners can easily find someone to teach them in person. “Now is really a good time to start because you have so many people that can teach you.”

Regardless of who is practicing buildering, parkour or tricking, Ard, Scavington and Shoebotham don’t recommend anyone climb, flip or jump off any building unless they have proper training. “Your canvas is the concrete so safety is always important,” Scavington says.

Ard shimmies up a pair of facing walls at the Buchanan Tower near the UBC library. He climbs with his back to one wall while using his feet on both walls for balance. As he ascends, a woman appears from the building next door, frowning. She tells them climbing the building is prohibited and the university doesn’t want to be held liable in case of an accident. Ard respectfully listens to her comments, climbs down and, with Begin in tow, moves on.