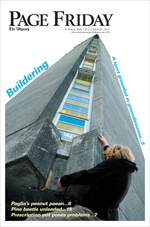 Buildering is dangerous, illegal and popular on campus
by Frieda Luk, Features Writer

Around 25 to 30 people are standing in front of a UBC clubhouse. The congenial atmosphere doesn’t fit the image of raucous shit-faced yahoos climbing the exteriors of campus buildings at 3 a.m.

Decked out in Gore-Tex and sweats, the large group divides into smaller clusters of six or seven people. They scrutinize a map of some buildings and climbing directions. The goal is to get up to a specific destination on a building. The reward? Personal satisfaction.

Scaling the walls of buildings has probably been around for as long as there has been youth and feelings of invincibility. Beyond the rebel-without-a-cause stereotype, buildering encompasses a rich and storied past that involved rakish youths at British universities like Oxford and Cambridge.

Buildering actually started in the 1890s, and Cambridge (and Oxford to some extent) developed a sophisticated subculture that flourished in the 1920s and 30s. After Geoffrey Winthrop Young, the noted English writer and mountaineer, published The Roof Climbers Guide to Trinity in 1899, a succession of Cambridge buildering references followed: Wall and Roof Climbing (1905), Climbing in Cambridge: An essay and some incidents (1921), articles in the Alpine Sports in Cambridge (1924) and A Novel Climb in Cambridge (1926). The holy grail of buildering references is the highly influential and much revered The Night Climbers of Cambridge, published in 1937 under the pseudonym “Whipplesnaith,” which detailed, along with diagrams and photographs, the classic routes on campus: King’s College, St John’s College and The Senate Leap.

Slowly but surely, shrouded in notoriety and illicit appeal, buildering found its way over to North American universities. Things don’t seem to have changed that much, because climbing buildings — or, for that matter, anything — has not lost its allure.

With its sports-inclined and rugged outdoorsy image, it’s fitting that UBC has its own classic buildering routes that date back to the 1960s.

Talking to a connoisseur of urban climbing who goes by the name Whipplesnaith Reborn (an appropriate alias if there ever was one), I learned that every building on campus can be climbed. A particularly good building, Whipplesnaith noted, is Koerner Library because of its myriad of architectural detailing. Another good climb is the Buchanan buildings, a mass of interconnected structures running zigzag from blocks A to D.

Whipplesnaith says the appeal of climbing is the challenge of scaling architecture that seems impossible, that lacks grooves and handholds. He told me, slyly, that despite appearances, Hebb Theatre is an excellent climb because of the cracked features at the back of the building.

Outside of UBC campus, Whipplesnaith’s dream buildering gig would be to climb the former Macmillan Bloedel building on Georgia and Thurlow Streets in downtown Vancouver. He compares the feeling of reaching a buildering goal like a high from the drug ecstasy, to which he quickly adds, “I would imagine.”

The same sort of sentiment is echoed by UBC student Kurt Amundson, who builders, he tells me, because of the adrenaline rush, although he sheepishly admits that this rationale is “quite immature.” Armed with a background in mountain climbing, Amundson has been buildering for six months. He was one of those active kids who started out climbing trees and then graduated to rock climbing and then buildings. He recently went on one of his most enjoyable buildering escapades, in Nelson, B.C., where he climbed the roof of an elementary school. Why so good? He went up with people who had never buildered before; the teamwork involved plus the excitement from first-timers contributed to the immense post-climb rush.

Though builderers are hardly the illuminati, their secrecy speaks to the threats meted out by authorities who probably suffer constantly from near nervous breakdowns over legal implications from climbers. As Amundson notes, “The more publicity buildering gets, the more the sport suffers.”

He points to what happened with skateboarding in the downtown core. Edges on railings have been clipped with stoppers and blocks put out to prevent skateboarding. Whipplesnaith emphasises that builderers don’t advertise because their sport is underground by nature. Even out of the public eye, buildering websites like Buildering.net — with which Whipplesnaith is affiliated — get a lot of traffic from Lower Mainland and even international posters.

The risks involved are significant. Although most builderers do not attempt large-scale escapades like the world-renowned urban climber Alain Robert — who had scaled skyscrapers in Kuala Lumpur and Abu Dhabi — the lack of proper technique and equipment can be fatal. Buildering, like any sport, demands a certain fitness and skill level for it to be safe. It is both a physical and a mental sport, and requires upper-body strength and concentration. Amundson checks the myth of tower-scaling climbers by noting that most climbs do not exceed 15 metres and that there are spotters in place in case of mishaps. Being something of an unofficial activity, though, the danger really comes from its lack of safety standards and professional equipment.

The more serious impediment that haunts buildering is its questionable legality. Ard Arvin, a long-time Vancouver champion of buildering and creator of Buildering.net has, for a while now, been dogged by legal imbroglios with the UBC legal department.

The problems started a couple of years ago, when he participated in a buildering competition on campus. Whipplesnaith, a close associate of Arvin, insisted that Arvin had renounced buildering and now engages only in virtual buildering. When asked what that is, he explained that viritual buildering is the process of cutting and pasting a picture of oneself onto a picture of a building.

“The photos on the site www.buildering.net,” Whipplesnaith repeats in a serious tone, “are strictly of virtual buildering.”

“Arvin deeply wants to take up buildering,” he goes on, “but cannot because of the legal problems.”

Throughout its rather infamous history, buildering has unofficially combined athleticism and rebellion; as Alain Robert, jailed numerous times for climbing, famously said, “I’d rather stay in a prison than in a hospital.”

Unlike other fringe sports like skateboarding, Amundson doubts that buildering will ever crack the mainstream. The problem he finds is that the sport is a little “too dangerous” for mass appeal, and he adds that he hasn’t met that many builderers in the city. Moreover, buildering is more about the skill than the image and the huge risks involved make it less than appealing. For decades, buildering has existed under the radar and its popularity remains on university hubs, which seems to suggest intrinsic limits to its popularity.

But I’m not so sure. With the pop culture machine devouring and co-opting every morsel of tradition available, buildering might go in the way of punk rock and skateboarding: watered-down and safe. But hopefully the stalwarts of the sport will prevent that from happening.

This past January the first World Buildering Championships were held in Cologne, Germany. The informal atmosphere, charming unprofessionalism and lack of international participation in the competition belied the grand title. But it expressed the underlying geist of buildering, which turns out to be simply about good friends and good climbing. Basically, the World Buildering Championships is a gathering of likeminded people who cheer each other on. It’s endearing.

Like with rock climbing, the trick is to find the perfect holds with the right overall body positioning and adequate balance. The difficulty with climbing buildings is that the uniformity and evenness of the exterior make it difficult to find the grooves for holds. It is like a physical enigma, being solved only through ingenuity, persistence and foolhardiness. Buildering is a lifestyle and a philosophy of taming modernity by conquering the urban environment.

Beauty is indeed in the eye of the beholder — buildering thrives on imperfection and alters how urban decay is perceived. Although it is a dangerous pastime, I applaud climbers for their restless frontier spirit. Amundson maintains, “We’re not that crazy.” I’m sure the authorities would be thrilled to hear that.

As for the existence of a buildering subculture, Whipplesnaith underscores, with a measure of tongue-in-cheek, that “the only subculture is dressing up in Spiderman costumes.” I’m all for it.

Please be advised that The Ubyssey (like The Tyee) does not endorse these activities in any way. Climbing on university structures is extremely dangerous and is not permitted. Any person found doing so could face university discipline or legal proceedings. Furthermore, The Ubyssey (like The Tyee) will accept no responsibility for any injury or loss caused by such activity nor any effect caused by the reading of an article about such activity.

Please be advised that the Ubyssey does not endorse these activities in any way. Climbing on University structures is extremely dangerous and is not permitted. Any person found doing so could face University discipline or legal proceedings. Furthermore, the Ubyssey will accept no responsibility for any injury or loss caused by such activity nor any effect caused by the reading of an article about such activity.