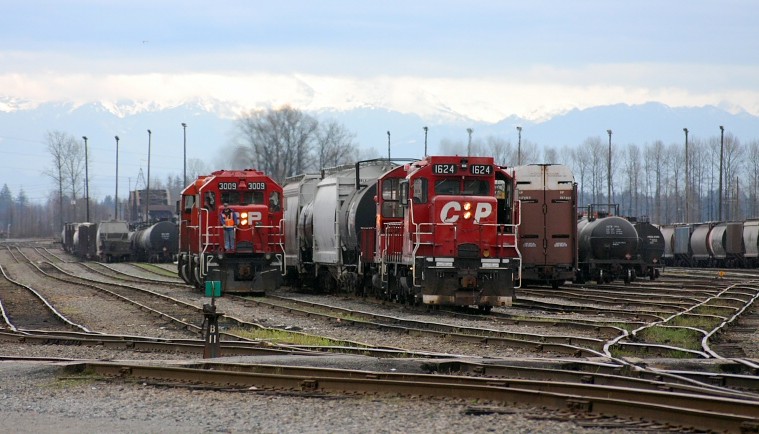 Leaving on a freight train, don’t know when I’ll be back again.

Being an unemployed bum can get hectic sometimes. That’s why occasionally I need to step back from my daily routine of avoiding work and go on a road trip. My plan was to visit some friends in Calgary that I haven’t seen in awhile. Usually I hitchhike the 970 km, but I’ve been a bit of a grump lately and I didn’t really feel like having to make small talk with every person who picks me up. It’s the same old conversation:

driver: So what do you do?
me: I’m an engineer.
driver: Really? [They never believe me, I suppose I don’t fit the mold?] What kind?
me: Electrical. I work for a digital camera company.
driver: Cool, I’m looking at buying a digital camera, can you recommend one?
me: Well we don’t make consumer grade cameras. We make high-end digital cameras used for microscopy. Our entry-level camera sells for about $10,000 US.
driver: Wow that’s a lot.

And so on and so forth. I’m lying a little bit. I used to be a working engineer, but have since retired. Because this situation is a little hard to explain (I’m only 28), and because the real purpose of this conversation is to prove that I’m a normal, decent human being that is not going to murder them with a rusty axe, I choose to say I’m gainfully employed.

Given my recent asocial tendencies, I could imagine myself snapping on one of these last remaining kind souls of the world. Very bad karma. So instead I decided to hop a freight train. Just lay out, relax, and take in the beautiful scenery. Hobo style.
I’ve been wanting to hop a train for years, but something always tries to kill my motivation. Like when I finally tracked down someone with first-hand information on the sport, some hobo-guru from New Hampshire, and he told me: “don’t do it.” Jerk. Or the time a couple friends hopped a train from Elkford to Vancouver. They didn’t get very far — one of them decided it would be a good idea to surf the train and a motorist called the cops. The police assumed the worst, that some hobo turned Al Qaeda was bent on derailing freight trains. It ended in a full scale manhunt with police helicopters and dogs. Fortunately one of them was the son of a retired local police sergeant, and they got off with a warning.

Determined and undeterred, I bought four cans of tuna and four cans of pork-n-beans. Proper hobo food. I’d done some research on which types of cars were rideable. According to one forum,”don’t ride loaded boxcars or container cars because the loads can shift and crush you.” I packed a sleeping bag, a tarp, $100, earplugs, and no ID whatsoever. If I got busted, my name is Jamie Ford. I live in Regina, Saskatchewan, no fixed address, on my way home. No amount of torture would make me admit otherwise. I don’t have any prints on file. I don’t have a criminal record and I’d like to keep it that way. They could hold me as long as they like, it’s not like I’ve got to work the next day.

I headed off to the Port Coquitlam rail yard via the West Coast Express passenger train, which stops right beside the yard. It was pouring rain. Within 15 minutes I, and everything I packed, was thoroughly soaked. My initial plan was to watch and see what trains were going where and wait until dark to make my move. But my desire to get out of the rain sent me running cluelessly through the yard towards a string of grain cars with an engine attached to it. I figured an empty grain car meant a trip to the prairies to get more grain. Easy enough. Grain cars have neat little cubbyholes in the end of them, which are about 5ft x 4ft x 4ft. Comfy enough to sleep in diagonally, out of sight, and most importantly out of the rain.

I eagerly waited in my little cubbyhole, thinking I’d soon be on my way to Calgary. However the engine detached and left my grain car sitting in the yard. I poked my head out to see what was going on, and in a terrifying moment of clairvoyance realized what was happening. The “engine” wasn’t a train engine in the sense of those things on the front of trains that pull long lines of cars through mountain passes. No this engine was just a little worker-bee whose sole job was to push strings of cars around the yard, assembling larger strings that would eventually be hooked up to a proper engine and hauled off to some great foreign land. The worker-bee accomplishes this by pushing cars down the yard until they are a going a fair speed, letting them go where they drift and slam into another chain. This links the couplings together. And this was what was about to happen to the car that I was in. A few seconds after I jumped off of the car, a big line of oil tankers came crashing into it. I don’t know exactly what it would feel like to be in one of those cars, but I imagine the sensation would be akin to driving into a telephone pole at 60 km/h.

In hindsight, I can see why the New Hampshire hobo-guru told me what he did. I obviously didn’t have a clue what I was in for.

I ran back over to some bushes — someone must have spotted me, as for the next three hours there was constant rail police patrols. I waited while the worker-bee assembled my train. And waited. And waited. In the pouring rain. I was cold and miserable. On a positive note, I learned some things through observation. Proper train engines, although looking very much like the worker-bee types, have distinct sound. Proper engines sound like a race car or a jet, whereas the little worker-bee types sound more like a Mac truck. Eventually the race car hooked up to a long string of empty grain cars and started pulling out. This was it. I grabbed my pack and ran frantically. There were two rail police trucks patrolling along the train, but I was cold and wet and didn’t much care anymore. I timed it the best I could, and after one truck passed I ran the final 50 meters and jumped on a grain car. Yee-haw. It was close. Another 20 seconds and the train would’ve been moving too fast. I collapsed in a wet pile and fell asleep. 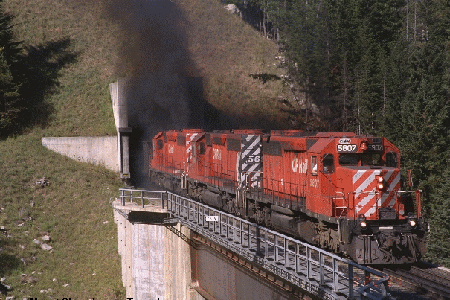 Grain cars provide great shelter from the elements, and you feel quite safe from the big bad world outside. I slept well, except for the occasional dream of suffocating in the Spiral Tunnels of Doom. Oh yeah the tunnel. There are two very long tunnels at Roger’s Pass that circle within a mountain, gaining elevation, coming out the other side. They are each 2 km long, taking roughly 20 minutes to pass through. During this time it’s very hard to breathe due to diesel smoke from the engine and the lack of oxygen in the tunnels. I’ve heard horror stories (urban legends?) of hobos dying from asphyxiation. I prepared for the tunnels by bringing a pack of balloons: fill the balloons beforehand and suck on the air from the balloons. Unfortunately the balloons were water balloons, so they didn’t inflate very much and broke easily. Not my best plan. Whatever, I figured I could put a sock in my mouth or something.

After a good amount of time sleeping and laying in my wet sleeping bag, I looked around and found some cardboard and empty beer-cans in the adjacent cubbyhole, signs that perhaps I was not the world’s first person to hop a train. I ate some beans and tried to figure out where I was. My map was soaked and unreadable. I knew we were traveling along the Thompson River and were probably somewhere around Kamloops. At Kamloops the rail line splits: one branch heading towards Calgary, and the other towards Edmonton. I didn’t want to miss this junction in case I was on the wrong train. I could jump off at the Kamloops rail yard and then catch a different train to Calgary. I must’ve slept right on through Kamloops though. The first sign I saw was for the tiny town of Blue River — I was well on my way towards Edmonton. Oh well, at least I wouldn’t have to deal with the tunnels.

The northern branch follows Highway 5, which I’ve never had the pleasure of traveling before. I passed the day by reading “On the Road” by Jack Kerouac. Definitely cliche, but the perfect book to be reading at that moment in time. The autumn scenery was beautiful. The leaves had turned their colors weeks ago and were half gone. Fresh snow fell in the mountain passes, and I saw a moose by moonlight. I felt more comfortable hanging out on the deck at night, since I was less likely to be seen.

I had now spent over 24 hours on the train. The beans ran through me and I considered my options. I decided it was best to just hang out on the ladder, butt out, and just let loose.

Traveling through Mount Robson park I realized that I didn’t need to go all the way to Edmonton. I could jump off at Jasper and hitchhike back into Calgary along Highway 93. I had no idea whether the train would slow down enough to jump off, but it did. I jumped off, made my way off the tracks, and joined the world of law-abiding citizens. 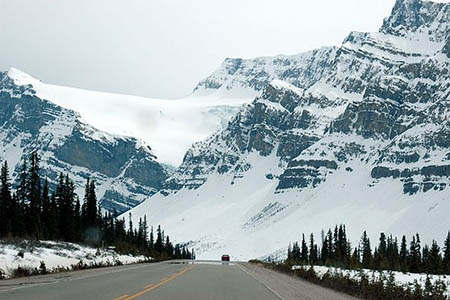 I milled around in a gas station to warm up a bit before hitting the highway. The cashier stared at me curiously. I went to the bathroom and realized why he was staring — I was absolutely filthy. Coal miner filthy. The kind of dirty that makes you look like a raccoon when you wash up and forget to wash your eye sockets, and makes you blow black snot for two days.

It was 3:00 am, I walked to the outskirts of town and settled down for the night in a ditch beside the road. Visions of freight trains danced in my head. At first light I grabbed my cardboard sign I’d made at the gas station and hit the road. Within five minutes I was inside a warm car on my way to Calgary. The quickest, easiest, best ride of my life. Highway 93 did not disappoint, and I enjoyed an absolutely beautiful mountain sunrise. Rugged mountains covered in snow, huge glaciers, frost covered trees, and too many Elk to count. An older lady named Beth picked me up, an animal biologist on her way to a meeting in Calgary. Beth worked, played, and lived in these mountains, and proved to be the ultimate tour guide. We swapped climbing stories and she told me the names of so many mountains I had heard about from climbing friends back home, but had never experienced firsthand.