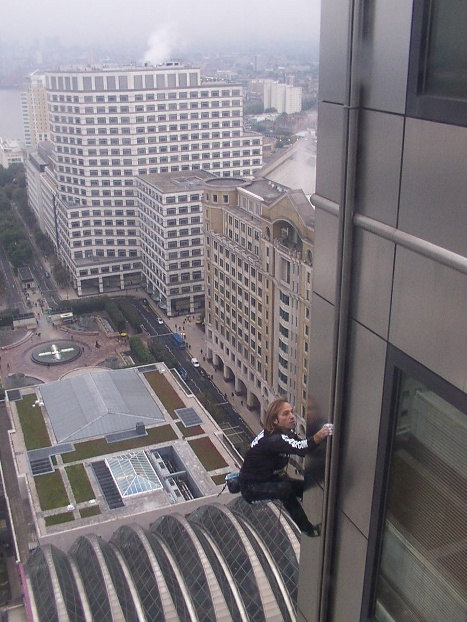 A daredevil French climber who calls himself ”Spiderman” climbed three-quarters of the way up one of the tallest buildings in the capital today, police said.

But free climber Alain Robert – known for scaling buildings without using ropes or other equipment – gave up his attempt to reach the top of the 244-metre Canada Tower in Docklands, east London, because of the cold and rain.

A cradle descended to collect Mr Robert, then took him back to the ground, where he was escorted from the premises by Canary Wharf security staff, said police at the scene. Mr Robert, 40, from Valence, was not arrested.

Scotland Yard said police, ambulance crew and the Fire Brigade went to the scene to ”monitor” the climber’s actions. ”We were called to the south side of the Tower at 8:30am following reports of a man climbing up,” said a spokesman. ”We arrived and have called the ambulance service and Fire Brigade as a precaution.” He added that officers were stationed at various levels in the building but that no one’s life was being put at risk.

Mr Robert, who is married with three children, has already scaled the Canary Wharf Tower, in 1995. He has also climbed the Eiffel Tower and more than 30 skyscrapers, including New York’s Empire State Building in 1994, and the Petronas Twin Towers in Kuala Lumpur, Malaysia, in 1997. In 2001 he was reported to have become the second man to conquer the Sears Tower in Chicago after Dan Goodwin, a Las Vegas stuntman who went by the name of ”Spider Dan”, scaled it in 1981.

Matthew Bird, 27, from Barking, east London, said: ”It was amazing. He was just like Spiderman and was moving up the building a floor at a time really quickly and then pausing for a moment before setting off again.” Mr Bird said about 100 people watched Mr Robert’s attempt. He added: ”I was quite scared for his safety because he slipped a couple of times, but I am sure he’s working within his abilities. It’s something that normal people can’t relate to, climbing so high without any ropes. It’s quite brave for a day like this.”

Mr Robert, who reached the 29th floor, climbed the structure using the metal grooves which support the maintenance cradle, police said. A Canary Wharf Group spokesperson said: ”Mr Robert got to the 35th floor and had to be rescued because he was stuck.” The spokesperson added that a window cleaning exterior lift had been lowered to rescue Mr Robert.

To get a viewpoint from the more clued in climbing crowd, Stow from the UKClimbing forum writes:

“I think Alain Robert actually has a good relationship with the various emergency services — at least in France. Apparently he teaches rescue to the fire department as a day job and it’s his mates who come and pull him off and it’s all a big laugh. His website has a garbled description of this.

Not to take away from the audaciousness of it but the guy this morning was definitely sliding a cam up the window cleaner’s groove left of the corner as he was doing the free moves and then hanging on it every ten feet or so. The moves weren’t a layback — he had one hand and one foot in slots on the left of the corner and one hand and foot in slots on the right and kind of pulled with his hands and pushed with his feet and shimmied up straddling the corner. He had stopped climbing and was basically hanging waiting for the scaffold for a long time. It looked like it was getting pretty slippery b/c of the rain and he just decided to bag it.”