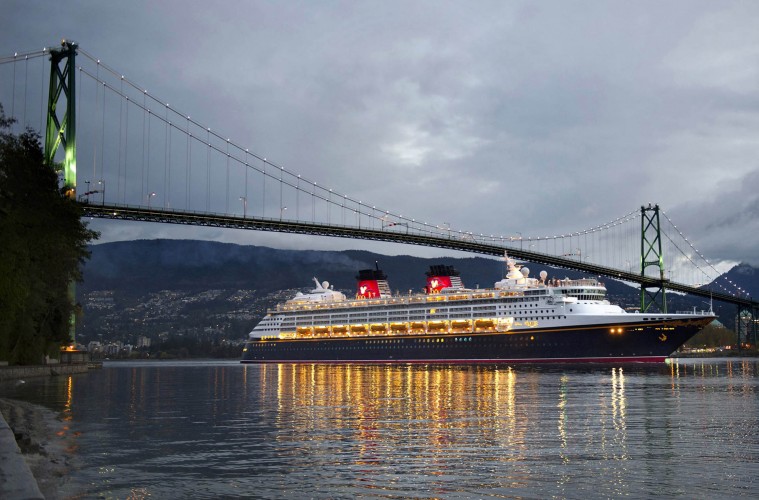 Police arrested a man who apparently tried to bungee jump off the Lions Gate Bridge onto a passing cruise ship late Sunday afternoon. Police say the 42-year-old Nanaimo man intended to free-fall, stopping just above the vessel and then rappel the remaining distance onto the deck. But the man miscalculated the speed of the cruise ship, police say. He hit the boat’s tennis court, bounced, and struck the stern railing, and was left dangling in mid-air. He then rappelled down to the water, where he was picked up by a small watercraft, and then by the Vancouver police marine squad about 5:20 p.m. The man was treated for minor head injuries and then taken to jail. Charges of mischief are pending.

Kate Hill of Vancouver, who witnessed the incident, was on the east side of the bridge taking photographs of the approaching cruise ship and waving to her cousin on board the boat when she spotted something suspicious. “I noticed these three guys on the west side,” she said. “And all of a sudden, they had a coat or some sort of padding over the railing and they were tying a rope and one of them had a climbing harness on, and he climbed over the side and dropped down out of sight just as the cruise ship was going under the bridge,” said Hill, who managed to snap a picture just before the man disappeared.

“There were shrieks of horror from down below. I guess the people saw him coming, you know, on the ship. I guess he missed.” After the man went over the side, Hill said she went to the end of the bridge for a better look and saw the man hanging at the end of the rope. She said the bridge was closed for a time as police, firefighters and paramedics — “the whole shooting match” — descended on the scene.

Hill said the man who went over the railing looked like a climber. “He was athletic-looking and he had bright scarlet pants on and a white T-shirt. The other two guys were very sort of inconspicuous-looking.”