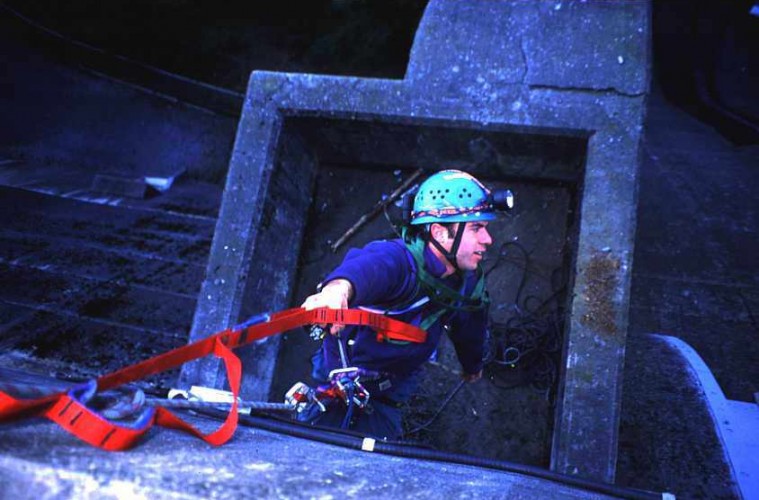 Through the cone of my headlamp, I watched Mark slip over the edge and into the darkness below. It had seemed as if Mark had been plotting this for a while… the mighty Cleveland Dam below Grouse Mountain must have been taunting. He had no trouble convincing Dan, Jay, and myself to join him on a midnight stealth ascent of this unclimbed prize. Leaving before midnight, we hoped to be well off the climb by dawn.

The approach was arguably the crux. After doing a blind rap off a railing into a coastal jungle, Jay set out to climb the side of the spillway (like the arm of an armchair – only bigger) to establish us in the spillway itself. A thin crack between two cement blocks was the only weakness. Being the first aid climbing experience for most of us, Dan, Mark, and I watched in awe as Jay quickly learned the art of pin stacking. Five meters later, he was on top of the arm. By the time it was my turn to follow on Jumars, the others had already rapped down the other side and into the spillway. Above us lay an 80-meter 70° cement wall topped by a big huge open mouth opening to Capilano Lake. For now, no water spilled and all was quiet. The hour was still young, our racks were loaded, and excitement was upon us.

Jay and Mark teamed up on the right crack, aiding the cement splitter with nuts, cams, and pins. Singing pins are usually a sound you like to hear but when trying to deek the authorities, they can cause problems. Meanwhile, Dan and I teamed up on the left one. Dan took the first lead, freeing our larger crack at about 5.9. I reached the belay some time later and looked at Dan’s 8-point anchor.

“I don’t trust this cement stuff, ok.”
Dan noticed my discomfort. “Are you alright?”
“I think I’m gonna shit my pants.”
“Yeah, it’s pretty scary, huh?” Dan’s so sweet. He wasn’t scared at all but he didn’t want me to feel like the lamo.
“No, I just have a to take a crap really bad. You’ll have to take the next lead. If I try it, it’ll be a heavy load to bear.”

Dan took off into the night once again as I writhed in agony, praying for the end to come soon. As he reached the top of the wall, the spillway rounded off to be flat with the lake behind. After placing a final piece, Dan scampered up to the top and traversed right to the top of Jay and Mark’s crack as well as where we had left a fixed line for jumaring the open spillway. When I reached Dan’s last point, I realized that if I pulled Dan’s last piece, I would take a 20 meter pendulum into a corner. That’s like free-falling off a 7 story building! I thought about it but decided against.

Instead, I had to wait (as my pants feared loading) for the first guy to clear the top and send me down a line to jumar. Time crept on so slowly until I felt like I could hold it no long: “I’m sick and tired of this shit!!!” Mark giggled and Jay lowered a line. I jumared for all I was worth, cleared the top, and ran for the trees for all I my pants were worth.

Feeling fine, I walked back to the bridge over the spillway and congratulated Mark and Jay as the sun rose. Hey, where’s Dan? One look over the edge and we saw Dan struggling with some VOC-standard-issue Jumars. He was pooped as were the rest of us as he pulled over the top, sporting a clusterfuck that would impress a sparrow. The authorities arrived on the scene right about then but went to our start point while we scurried off from our finish point to an awaiting get-away car.

A breakfast of champion’s at Mark’s house overlooking Vancouver waking to a new spring day put the final touches on our midnight antics. I heard over the radio that they opened the spillway the next night. Talk about objective hazard!