A Solo Affair? A night out on the UBC Campus 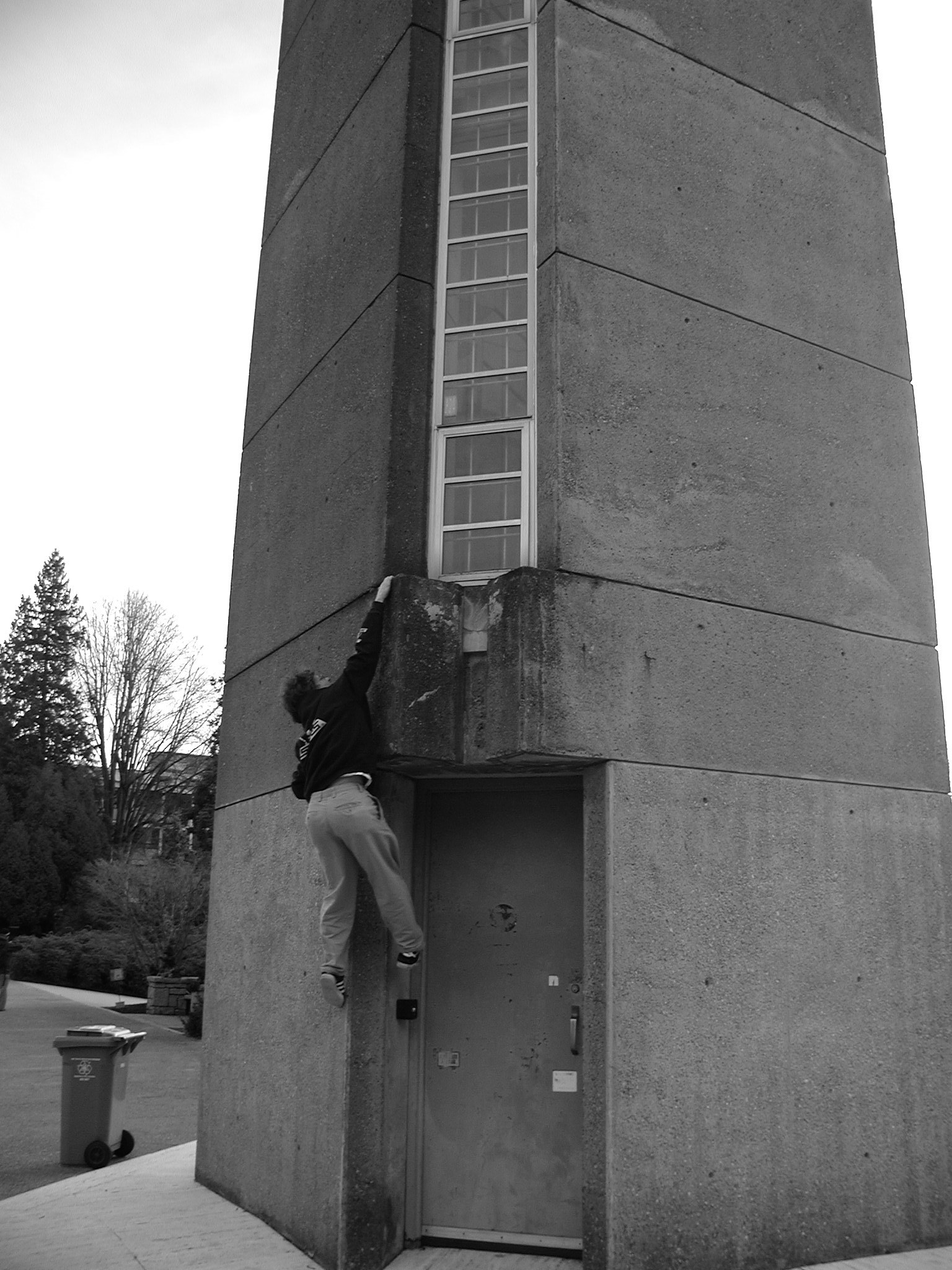 “Buildering will probably always remain a solo weekend or nighttime activity. . . . Climbers should be aware of the legal ramifications of buildering. Trespassing laws are most frequently discussed by police officers while lecturing the apprehended. In these situations it is best to remain quiet and polite. Long hair doesn’t make good impressions.” -Marc Jensen on Buildering Ethics. Bouldering, Buildering and Climbing in the SF Bay Region, 1988

Tuesday night is the UBC Varsity Outdoor Club buildering night. Well the official bill of events is climbing at the SUB indoor wall with drinks at the Gallery afterward. However a third event was unofficially added — post drinks buildering.

On such evening a couple weeks ago, Kenny, Keddie, Conor, Chris, Laurin, Lena, and I decided to take a campus stroll. I’d discovered a new problem a couple days before and was excited to show the others. 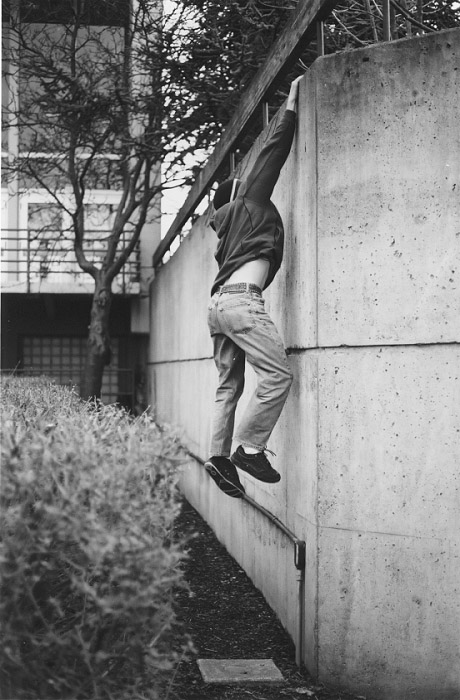 Hebb Theatre, from the 1965 Cragrats of UBC guidebook

The new problem, located between the war memorial gym and the pool, consists of a dyno with a crimpy edge for the hands, and an electrical conduit for the feet. My secret weapon is a 3″ positive-ape-index, that is, my arm-span is 3″ longer than my height. Most non-neanderthalic types are equidistant or very close to it. I first heard about this interesting fact from my high school wood-shop class teacher. I called bullshit, so he made me stand up to test the theory. I proved him wrong, quick win for me. Undeterred he measured student after student, until it was clear I was the freak in the room.

The dyno proved to be quite a jump, I think Laurin was the only one to pull it off. 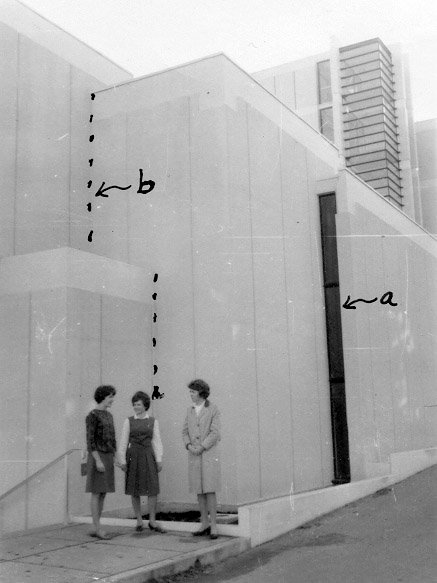 Next stop was Hebb Theatre. No fine ladies there (see pic), but over the last 35 yrs quite a substantial tree has grown where they once stood. ‘Route b’ is still there, and still classic. Laurin found a different way up ‘route a’, stemming in the cracks of the different walls. Quite highball, with a nasty landing. Kenny repeated it, and almost pumped out at the top. I think this building is his nemesis…he took a 1 story fall out of the cracks about a year ago. If he hadn’t landed on me, he would’ve been quite hurt.

Next we made our way over to the ultra-classic Oceanography building, with a few stops on the way. Lena climbed some crazy glass covered stairway. Some dirty rat spotted her and called the cops…well…the cowboys. Cowboys are like cops, only you don’t have to be afraid of them. Trad climbers say “when it doubt, run it out”, builderers say “when in doubt, run”. That’s just what we did. Luckily Conor had a key for a nearby building, and we deked em out. 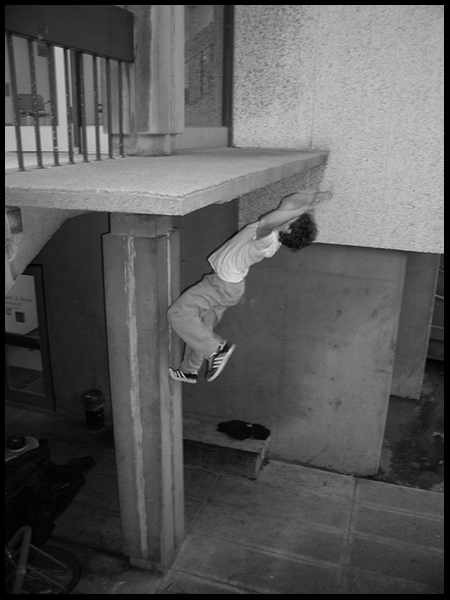 After some time in hiding, we moved to Oceanography. I recommend the the two-handed dyno, with a side of fries. It can’t be beat. It’s really quite easy, anyone could do it. It’s just committing. While we were all taking turns on the dyno, Laurin was entertaining himself with the famous UBC bouncy bushes. If you don’t know about these things, it’s time you did: usually the sport of inebriated students on the way back from a pub-crawl, these bushes are great shock absorbers for flying bodies. Just run and hurl yourself into them. Then laugh at how it didn’t hurt. Laurin takes it to the next level though. He jumped off a roof into the bushes. Excited by this progression to the fine sport of bouncy bushes, we all took turns hurtling ourselves off the roof. Some bystanders joined in on the fun as well.

Bounced out, we headed over to the clock tower. No we didn’t climb the whole thing. I don’t think think that’s ever been done. It’d be very impressive though — probably 5.12+ish moves completely unprotected. We weren’t feeling very suicidal, so we entertained ourselves just getting up onto the shelf above the doorway. Positive ape index wins again. Lena was oh-so-close but limited by what Kenny referred to as positive bosom index.

One last stop at the main library, some talk of spelunking the UBC steam tunnels, and we were done. Still hyper from a good night out, we decided to crash Laurin’s place, eat all his food, throw crap off his 14th floor balcony and annoy his roommates who were trying to study.