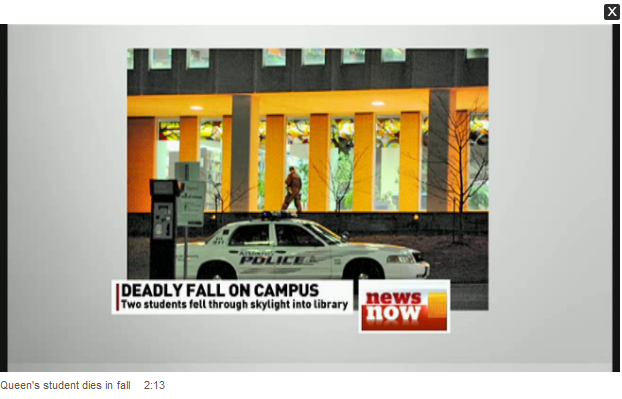 Second buildering/UrbEx related death this year. Careful out there kids. Glass gives you no warning.

Two students fell through a library skylight – one to his death – at Queen’s University in Kingston, Ont., on Thursday.

Habib Khan, 19, a Canadian whose hometown isn’t known but whose family lives in Saudi Arabia, was killed when he fell through a skylight at a campus library. He was a first-year student.

A second student, Stephen Nagy, 18, from Mississauga, Ont., was listed in stable condition in hospital.

A handwritten sign on the glass door of Duncan McArthur library Friday said it was closed because of an emergency. Part of a stairway blocked off by yellow police tape was visible through the door.

University rules do not allow students on any campus roofs, and the school has no idea why Khan and Nagy were on the library skylight, said John Pierce, associate vice-principal and dean of student affairs at Queen’s.

“We don’t know a whole lot at this point,” he said. “We know that two students fell through a skylight, and that happened around 7:30 [and that] is when police and us were informed.

Police continued to investigate Friday under the authority of the regional coroner’s office. They have offered no explanation for the fall.

“Our hearts and prayers are with Habib’s and Stephen’s families and friends,” Queen’s principal Daniel Woolf said. “This is a terrible tragedy.”

The library building is three storeys high with a flat roof. A dark, concrete complex, it covers about half a city block and is a 15-minute walk from the main hub of the Queen’s campus.

Next door is a student residence, where the injured student Nagy lives.

Taylor Richardson, who lives in the same residence, said students are in shock.

“It’s just sad to know that someone so young lost their life,” she said. “Does it make sense that somebody would be on that roof? No, I’ve never seen anyone up there.”

Not 1st fatal fall this year at Queen’s

Khan’s death comes just three months after another first-year student was killed in a fall at Queen’s.

In the wake of the latest fall, Queen’s officials said they want to reassure parents their children are safe at the university and that everything is being done to ensure such a tragedy never happens again.

Counsellors from the university’s health, counselling and disability services met with the students’ friends overnight.

“This is already a stressful time of year with exams starting next week,” said Pierce, the vice-principal. “We are focusing on ensuring that students have the support they need in this very difficult time.”