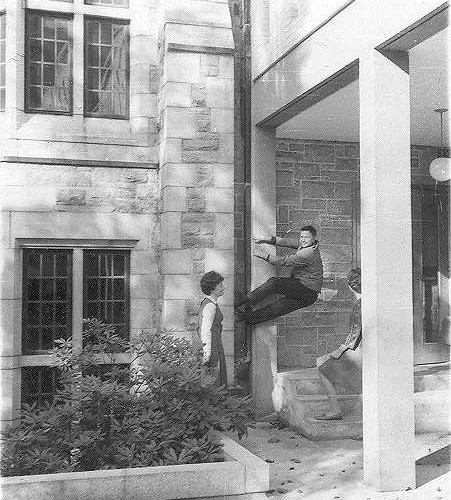 Movies mirror the times but they occasionally cast light beyond the mainstream. An old black and white film starring Buster Keaton had a jobless victim of the Great Depression climbing a building as a stunt to raise some money. King Kong zeroed in more accurately on the emotions of his early audiences, but did he ever inspire anyone to think, “Hey, climbing a building looks exciting. If I can’t carry the woman maybe I’ll just put a negligee up there.”? If so, it could have unwittingly helped to keep alive an offshoot of mountaineering known as “buildering” where some people found high times long before Hollywood primed its pumps and began provisioning the human thirst for thrill.

Over 100 years ago students at Cambridge University were climbing on the outwardly menacing gothic architecture of their colleges, whose gargoyles and drip courses in fact welcomed contact with hands and feet. These young gentlemen were night-climbers who wore black clothing and rubbed charcoal on their faces, perhaps in romantic exaggeration of the illicit nature of their rooftop excursions, or perhaps in real fear of being caught and getting sent down (expelled). Often some embarrassing object was placed high upon the stern facades of their campus building as a practical joke.

With few exceptions buildings make poor climbs. They are either too monotonous or too risky. Drain pipes pull from their fasteners or roof slates avalanche from dramatic heights. What campus buildings have in their favour is convenience. Most climbing on them is done to see if a particular way up will work, or to be the first to do it, or for a prank. Rarely some form of education can take place. A difficult clock tower on an eastern campus required a rope for safety. First, attempts were made to fire an arrow with a line attached through the upper windows. Then, in a problem solving breakthrough worthy of graduate chimpanzees, it was found that by first going down through a manhole in an adjacent street one could travel underground, come up inside the tower, and go up the stairs to drop the rope.

Students have climbed on campus buildings long enough to generate overtones of tradition and legend. Guidebooks sometimes appear which combine truth with fiction or realism with whimsy in proportions known only to the authors. One such guide to an Ivy League school contained the following description, “Hands in either side of vee, then pull up”. These words referred to an engraved motto high over a church entrance. They caused sweaty palms and consternation in more than one student unaware that they were meant as a joke.

Walls which make for good climbing are usually built of rough cut stone. Daylight is needed to search through the combinations of holds, reaches, pulls, pushes, and footwork which absorb a climber as he or she tries to find in as short a time as possible the path which takes the least effort. For good climbing, then, builderers rely heavily on the bits of nature which have been incorporated or allowed to remain by the architects. Unfortunately, this good climbing done by daylight is often bedeviled by security guards and higher ranks who see no carrot where such marginal behaviour is concerned and who fear the big stick of increased insurance premiums. At UBC climbing on buildings is discouraged, leaving only the furtive daylight or secret nighttime alternatives. Queens University of Kingston Ontario must have been visited by UFOs, for a compromise exists there which allows students to climb on certain buildings while placing others off limits.

Why are there not more opportunities for people past primary-school age to climb? From our distant anthropoid ancestors we inherit an ability and an inclination to ascend. Children happily return to the trees. Playgrounds have monkey bars and other climbing gear. Do apes lift weights for fun? Climbing can also pass beyond fun. In some adults the carefree pastime of youth reawakens with narrowed focus, deepened intensity, and a sense of danger strong enough to bring every hormone and neurotransmitter right on the edge.

The future may hold better things for grown climbers. Rock climbing began in Britain and many developments in the sport first appeared there. A count, now several years old, found over 80 walls built expressly for climbing in Great Britain. A book written on the subject suggests, among other design guidelines, that such facilities should be free, open around the clock, and have no requirements for ropes, helmets, or other safety precautions. Self-reliance is a cherished value among climbers and any yoke placed by authority will chafe.

In 1986 North America’s first indoor climbing gym opened in Seattle. There was a feeling that the venture would have difficulty succeeding where such a good free alternative existed outdoors. Time has proved otherwise. Energized by growth and commercial success of the sport in Europe, climbing gyms are being drawn out of the urban landscape by the same force which produces films: people willing to walk in the doors and pay money. Vancouver will soon have its third gym, the Cliffhanger, which will join the Rock House in Richmond and the Edge in North Vancouver in offering indoor walls of finer imaginative potential than architects have yet seen fit to place on the outside of their buildings.

First appeared in the March 29th, 1994 edition of The Campus Times. By King Kong.