Outpatients – An Ascent of the Old Incinerator Smokestack in St. Paul’s Hospital, Vancouver BC. 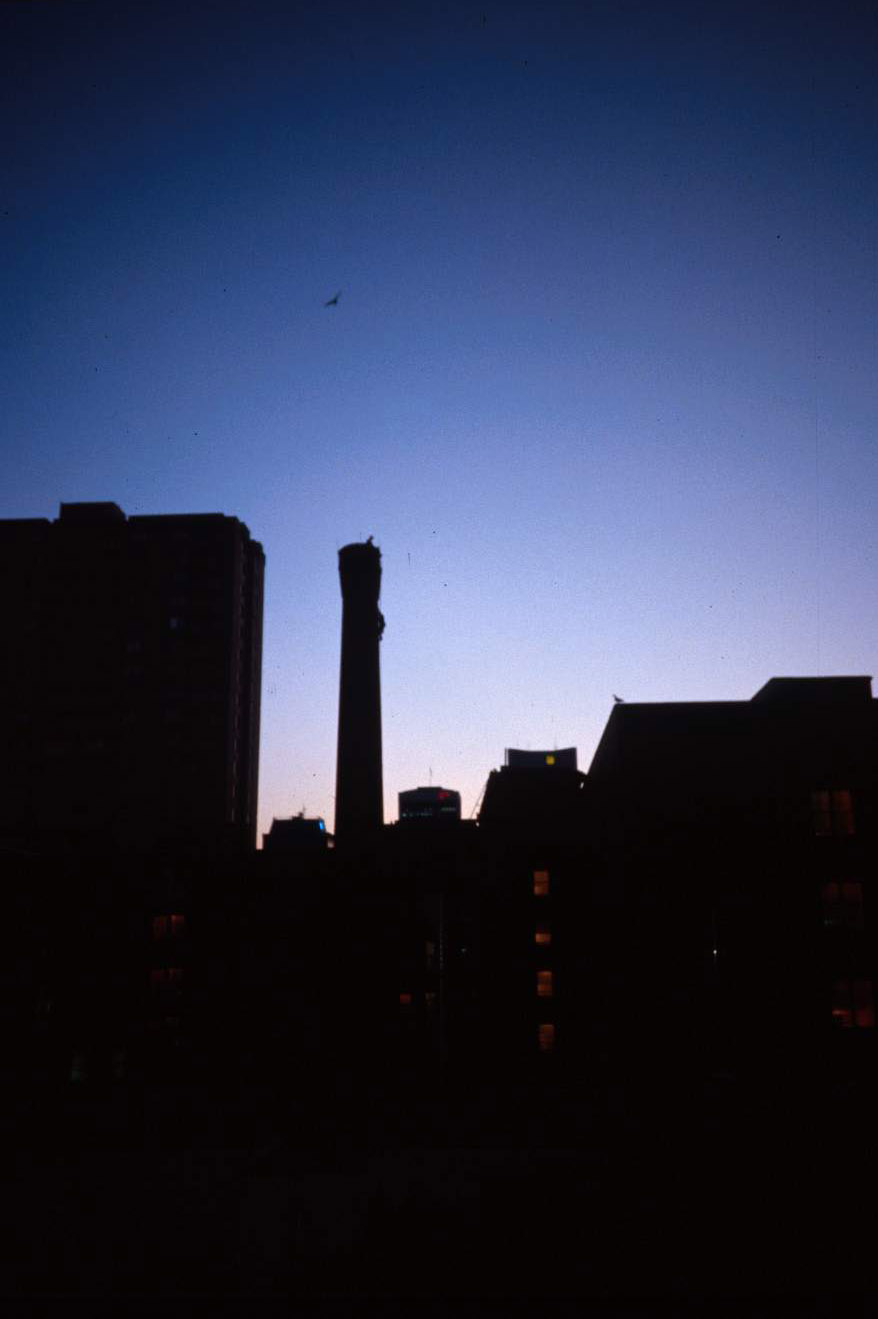 4:10 Greg and I meet outside the Hollywood Theatre on Broadway. In my pack are two ropes, some slings and carabiners, my harness, rock shoes and a camera.

4:20 We arrive by bike at the Burrard Street entrance of St. Paul’s Hospital. It is still dark. Karen arrives, a pathology student friend of the Moose who has offered to take some photos of the climb. I give her my camera too.

4:35 The Moose arrives and we enter the building, visit the mad scientist lab where he does his research. Karen gets herself comfortable at a chosen viewpoint.

4:45 We enter the courtyard where the old smokestack rises above a disused incinerator building. It is an octagonal redbrick structure, thirty meters high from the incinerator roof. Where the sides of the chimney meet the bricks overlap and protrude, making eight identical, climbable aretes. On two of the sides a steel cable runs from the base all the way to the top – perhaps the ground wire for a lightning conductor. It is attached every three meters or so and we will sling this as protection for the climb. Mark and I test the strength of this by hanging off it at the bottom. It appears to be bomber.

4:50 At the base of the chimney, (getting there involves combined tactics to reach the lip of the incinerator roof), I play rock-paper-scissors with Mark. My paper is cut by his scissors, and he scores the lead. We rack up as the sky gets lighter.

4:55 The Moose starts climbing. It is straightforward and repetitive until near the top, but this has to be one of the most dramatic man-made lines I have ever seen. He makes short work of the crux, (a sizable bulge at the chimney rim), and secures himself to a cast iron ladder that runs up the inside. It must have been an exciting finish: the cable protection is detached near the top and seagulls circle and scream in annoyance at our intrusion.

5:10 Greg ties on and gets up there, and he is nearly at the top when two security guards see him and start yelling. He tells them he is inspecting the chimney on behalf of the City of Vancouver, and I duck out of sight and curse our luck. They call the police.

5:25 My rope comes tight and I step into view and start climbing. I am told very calmly to get right back down and wait or I will be in big trouble. I hesitate, call up, climb down a bit. Then I realise how much this experience means to me, so I explain that I need to bring the rope up there so that we can all rappel down safely. I ignore their response and get moving. Besides, I hate conflict with authority.

5:35 We straddle the top and grin at each other. Six police officers and two police cars have arrived at the (quote) scene of the crime (unquote)… it was straight out of Arlo Guthrie’s “Alice’s Restaurant”. At least two of them are taking pictures – but whether for evidence or the sheer entertainment value it is hard to tell. They use an unintelligible megaphone to call up to us. When we figure out that they are talking about the fire department we hastily assure them that we are fine, and that we had actually planned to come down all by ourselves.

5:40 We are seriously enjoying the situation and the adrenaline rush. Greg and I are definitely more wigged out by the police presence than cool cat Mark, which is good because he inspires calm and then volunteers to rap down first. Before we descend, though, we wave for our photographer, who is still busily snapping shots. The seagulls – having turned us in to the law with their cries of alarm – have now disappeared, and it is a beautiful dawn in Vancouver. We set up a rappel off the old ladder.

5:50 Safely down and the ropes pull smoothly. We pack the gear quickly as if our actions are unobserved. Two policemen have gained access to a viewpoint above us and they tell us to get down from the roof “the same way you got up”. We dangle and drop, and the most senior looking guy offers to help us with our packs. He looks really amused.

6:00 As we walk down the steps where we are to be interviewed by our uniformed friends, I pass a young officer and say “sorry for getting you out here this early”. He looks startled and tells me that we are not free to go anywhere yet.

6:05 The talking-to begins. The police are definitely interested in why we climbed it and what it was like. Greg starts to tells them that they are opening a philosophical can of worms with those questions, but Moose quickly explains that the views were great and it was a bit of a challenge, which they seem to understand. They even compliment us on our achievement by saying that they had cancelled the fire department when they saw how “professional” we looked! Overall, I get the impression that the police are not too keen on charging us and giving us a record, (for “mischief”, would you believe… if I am to be made a criminal then this is the offence I would like to be charged for). However, they obviously must go through the formalities so that we don’t imagine that we are getting away with it. At least I hope this is the case. Our real enemies are the two power-hungry rent-a-guard types, (Fatty the Tattoo and Dufus), who for some reason badly want us to get into trouble.
The police take our names, addresses and phone numbers. Fatty takes Mark’s hospital swipe-card and tells us that we are barred for life from St. Paul’s Hospital. There is a moment of confusion when Mark has to explain why there is a photo of Liberachi on his ID card – apparently it was a lab joke, and the police find it pretty funny too. Fatty looks confused. “He’s the one who wouldn’t come down when I told him”; he points at me like a tell-tale kid. I explain that this was the only way to bring the second rope up so that we could rappel down. Not entirely true, but it is plausible. The Chief looks around and decides that Officer N. is to be the one investigating the case. Officer N. checks some details with us, and while we are talking the Chief grins and takes a picture of the scene. We cannot help ourselves and burst out laughing.
The crux of the matter is that we are threatened with a summons. If we get one then we will go to court, and if we go to court there is a good chance that we will get that criminal record. There are some obvious downsides to this. We would never be allowed to enter the United States – I think. Greg would have to come back from his planned New Zealand trip to answer the summons. Mark could be in more trouble regarding his research in the St. Paul’s pathology lab, even if his supervisor is a very understanding guy as he claims. Finally, I suppose it is lucky that I am a Canadian citizen, or I could be sent back to Ireland. (Ribs MacLinington, who is not Canadian, made a good call when he decided not to come with us).

7:00 We eat the finest cinnamon buns I have ever tasted and assess our situation over coffee. All we can do now is wait and see what happens. I think we are all quite happy that the risks we took were worth the experience. Greg leaves to pick up his passport, so the Moose and I hang out for a while and we muse on the state of this complicated world.